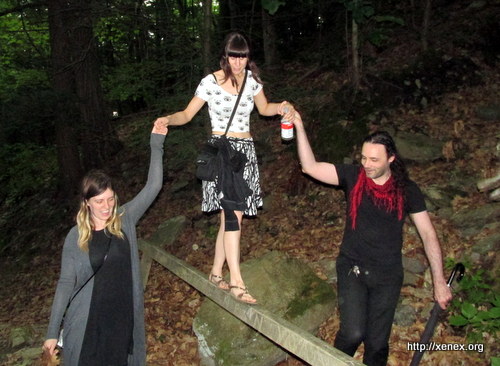 "Thank you, Kristina," I say as we arrive at Bish Bash Falls, "you surprised me."

She smiles demurely, maybe offering an "oh gosh" by way of accepting my thanks.

As I usually fill the role of activities director for my band of introverts, I had ask Daniel if he would want to go to the Strawberry Festival to make up for his was not feeling social Saturday, though I prefer to front load my weekend with plans and leave Sunday for slothful recovery. It allows me to drag the evenings out to their natural conclusions.

Around noon, I called Daniel to make certain the plans were still in effect. I got through a few groggy exchanges before it occurred to me that I had woken him from what sounded to be a deep sleep. I reaffirmed that we didn't have to go to the Strawberry Festival or necessarily hang out, which is how I remain in good graces. I would like to do things, but I have learned to treat no plan as definite until it is active, which has the side effect of rendering each day together a pleasant surprise.

Daniel promised me that we were still going to hang out, once he got his bearings.

We met at Cancun's, one of Red Hook's three Mexican restaurants within a block, as I gorged on complimentary chips and refried beans, Amber picked at an apple burrito, and Daniel had his breakfast of a chimichanga. He had been up until four watching an anime, then figured he might as well invest another four hours to finish the series. This is not a mindset I understand, since I value sleep over most things not either Amber or a particularly cunning idea, but I respect his choices.

Over lunch, I pointed out that the Strawberry Festival was likely out of the equation, as it would be nearly three by the time we arrived and it ended at five. It would be enough time for a shortcake, yes, but it would not justify the travel time. Instead, I offered that we could get supplies and make dinner later. It is more casual and inactive than I had planned to be, but I valued the company more than fruity desserts.

As we get supplies for dinner, I joked that Amber might burn down Daniel's apartment as she surely did a local restaurant she didn't like.

"That's fine with me. I'll just move to Maryland sooner."

I tensed. I didn't know this was something Daniel had already been considering, even enough to use it as a joke. I let the remark pass until Daniel dropped Amber and me at our car. "Did you hear that foolishness that Daniel just said?"

It took her a moment to skim back through what I could mean, then she said, "Leaving us? How dare he!"

Literally the moment we got back from grocery shopping and I sat at the computer, Kristina messaged to ask if we wanted to go hiking. I have not had a good hike with this crew this season, so I edged Amber and Daniel toward saying yes. Daniel seemed amenable, but I was suspicious. 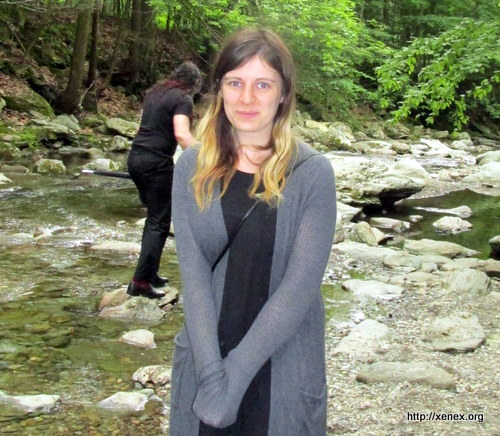 "Are you sure you are up for this in your state? I think I would be snarling with so little sleep."

"I have had enough coffee for this to seem like a good idea," he said.

As we gently ascend the mountain, the walk little more than a gradual glade, I feel more in the moment than I have in a while. I know I am where I want most to be and with the company I cherish. So often in my life, I feel as though I am acting despite my better judgment, which is a waste of effort. Yes, obviously, I need to spend too many hours paying the bills, but I needn't slog through my life outside work.

We stop at the first spot that gives us ready access to the water we will follow up to the falls. On a much warmer day, I don't doubt we would ignore the no swimming sign and splash around a bit. It would not be full-on submersion and breast strokes, but it would be wetter than plausible deniability could forgive, not that I suspect any of the other hikers would narc on people enjoying their today.

Amber stays in close contact with Kristina, making it plain how much they miss one another during absences. Given the tenor of their discussions, it is astounding that they ever spent years without talking to one another.

Kristina mentions prior hikes up this mountain, that somewhere is a wooden throne padded with leaves. We understand that it is unlikely that such a sight remains, but she nearly hops when finding it just over the border into Massachusetts. To us, it is the gnarled roots of an upturned tree, but she takes a stick as her scepter and issues decrees from her perch.

As I see the falls, I remind myself to allow myself the experience of being here and seeing these things without letting them fall into some schema, conflating it with the memory of other waterfalls, other hikes. The water pours on rocks, which drop the falls into a still pool. Kristina states how lovely it is to swim in that pool and I have seen photos to that effect, but that is impossible. There were clearly signs forbidding swimming.

We are not alone in experiencing the falls today. Crouched between rocks is a family of seven and scattered couples taking pictures. I don't disparage this, and not simply because I had been snapping pictures of my friends from the moment we stepped out of Daniel's car. I want to remember this day, even if I have to lean on artificial slices of the moments to jog my recall. I look back at moment when the day at work is hard, when the winter is long. It helps to remember days I might have let get buried under the sand of the mundane.

Kristina writes "Amber [heart] Thomm" on the trunk of a fallen tree, then adds her own name and a heart as a prefix. I take the pen and append a heart and Daniel's name.

I cannot guarantee how much longer Daniel will be within a short drive from my apartment. He can and should grow in the direction his soul and circumstances require. However, I am not going to lose the holiness of today because of what may come in some (hopefully) far off tomorrow.