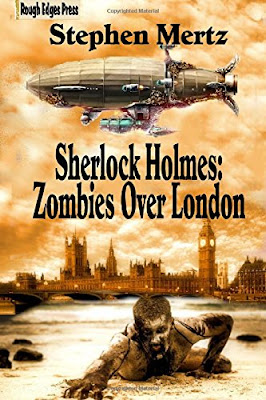 I have always wanted to hear Sherlock Holmes say—
“Zombies.” and “The undead.”
—but I didn’t know it until I read those words in Stephen Mertz’s Sherlock Holmes: Zombies Over London. It features, as the title suggests, Arthur Conan Doyle’s timeless detective Sherlock Holmes. It is, as are the bulk of Conan Doyle’s original stories, narrated by Dr. John Watson and the narration is close to perfect – the cadence, noun and verb selection, characterization, and setting very much capture the feel and time of the original stories.

Best Story-Rich Games on PC: November…
Easy Mineshafts Under Village and in …
Aspen Ruggerfest and Sun Sets in Snow…
Top 10 Dirtiest Jobs In The World
VENEZUELA - In Chaos
It opens with a punch. Holmes and Watson are inflight aboard the futuristic military dirigible Blackhawk, approaching Castle Moriarty to rescue Watson’s wife, Mary Morstan, from the clutches of Professor Moriarty. Moriarty kidnapped Mary as a form of extortion to keep Holmes and Watson from investigating his most recent criminal endeavor. An enterprise Holmes knows nothing about, except Moriarty’s plan to auction off its results, whatever it is, to the highest bidder. The two men jump from the dirigible, a “flight enabler” – very much like a hang glider – strapped to their backs, landing safely on the roof of the castle. Once on the castle they notice a group of empty-eyed workers loading wagons in a precise, rigid manner; to Watson’s confusion, and incredulity, Holmes labels the workers as zombies. And Moriarty, always the master criminal, has more than zombies in his plans.
Sherlock Holmes: Zombies Over London is a hybrid adventure and detective novel. Its mystery is genuinely interesting. It features more than one nicely turned sub-plot, which effectively adds texture and confusion to the primary mystery without cheating. Its cast is unique and includes H. G. Wells and a teenage Albert Einstein. There are several scenes that display Mr. Mertz’s keen ability to develop action in a sparse, believable manner without losing the voice and tone of a Sherlock Holmes story. It is an impressive display of storytelling. It captures the essence of Conan Doyle’s stories while being wholly original, and it is a showcase of Mr. Mertz’s range as both storyteller and writer. And, it is damn fun.

5 Smart Steps to be a More Efficient Entrepreneur

Use the right size needle to ensure machine embroidery success