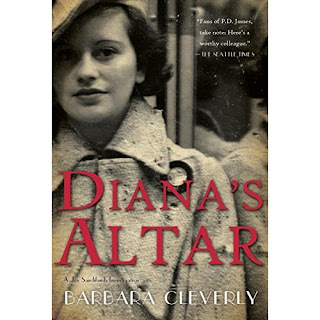 Charles Todd, Jacqueline Winspear, James Benn -- if you're already reading any of these authors whose mysteries depend on the actual history of the two World Wars of Europe and beyond, Barbara Cleverly's books belong on your reading table, too. Her first in the Joe Sandilands series, The Last Kashmiri Rose, came out in 2001 and grounded her character and "England" in the realities of Britain's failure as a colonial power. Sandilands begins to deepen as England's release of India means his own upcoming departure of the colony-turned-independent-nation, although it took until the ninth book of the series, The Blood Royal, for Joe Sandilands to embrace a leadership role in the Metropolitan Police.

Joe's not quite at the top of that force, but close enough to meet from time to time with the nation's political leaders. Personal losses deepened this character further, and it began to look as though he'd grow sadly alone in maturity -- but in book 12, Enter Pale Death, his competition with another man for the hand of a rural doctor seemed finally to bring him some happiness.

With that doctor, Adelaide Hartest, the new Sandilands investigaton (#13) opens in DIANA'S ALTAR. At the end of disturbing night -- whose details we learn much later -- Adelaide has bicycled before dawn to a small church in Cambridge, where she hopes to sit, think, and perhaps pray, seeking a way forward from the fatigue and anger shaking her.

But instead she confronts a dying man -- a young one, with a knife in his chest, proclaiming his own suicide. Although time, of course, turns longer and shorter in turns, as she sits with death, there's soon a constable on hand to assist, who in turn summons the local superintendent, Hunnyton; to Adelaide's surprise, this police office, after comforting her as best he can, asks whether Joe Sandilands is with her and moments later requests that she summon him immediately from London:

"Why should I? What's it got to do with Scotland Yard? The suicide of a Cambridge man in a Cambridge church?" She gave him a shrewd look. "The deceased would seem to have been an interesting man but surely of no concern to the Metropolitan Police? What's more, I would have thought ..."

He stopped her flow of protest by putting a finger over her lips. "That'll do, Adelaide! Look -- this here isn't a case for the Cambridge CID, I'm afraid. You'll have to take my word on it. I'll do the necessary for now but this is Joe's man."

The surprising presence of a man investigating in Cambridge for Joe Sandilands connects with Joe's extended responsibilities of liaison with the Special Branch, whose members Joe has described as "Twenty-six languages among them, guns in their armpits and fists like steam hammers. I try not to annoy them!"

To sort out this death and its importance to a dangerously international scientific laboratory in Cambridge (think German scientists, and more), Joe will need to immerse himself in the lives of the very wealthy and very prone to hurt and humiliate -- with high risks to all in his network. Adelaide herself has already seen too much and is in danger. So, for that matter, is England.

Espionage, crime, loyalty, and betrayal make this one of the more intense Joe Sandlilands investigations. Each twist -- and there are plenty -- is well outlined and intense, and the book accelerates in pace toward a dangerous confrontation, a revelation of secrets and pain, and two of the more grievous losses that Joe will ever witness.

A highly recommended book, and newly released from Soho Crime. By the way, Cambridge is home turf to author Barbara Cleverly, and her mastery of this crucial period in British history is laid powerfully against her meticulously portrayed university town.