WILDE THING
by Jannine Gallant
GENRE: Contemporary Romance
~~~~~~~~~~~~~
A digital copy of the featured book. Please visit GoddessFish.com to follow the tour, remember the more you comment better your chances on winning. 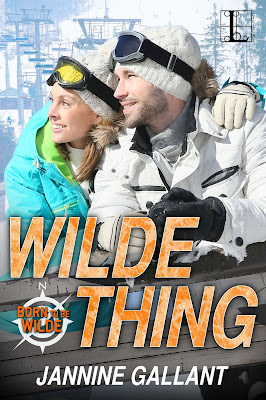 BLURB:
The Wilde brothers are addicted to the rush of adventure. But one of them is about to learn no matter how often you look for danger, you don’t want danger finding you.
For extreme skier Tripp Wilde, pushing the limits is what he lives for. Unfortunately, the inherent risk takes a toll on his body. After an injury sidelines him, he ends up in the care of his little sister’s best friend, physical therapist Hannah Ryder—who has grown up in all the right ways since they last met.
Hannah doesn’t mix business with pleasure, even though she harbored a maddening crush on the irresistible Tripp years before. So, while Tripp tries every slick maneuver he knows to bed her, Hannah uses her own moves to keep the hotshot skier cooled off while trying to control her own growing desire for him.
After the pair witness what they think may be a murder on the slopes, along with the men responsible, no one believes their story. But when a series of unlikely accidents suggests they are being targeted, the two will have to trust in each other like never before if they are going to survive.
Buy Links:
Amazon iBooks Google Kobo B & N
~~~~~~~~~~~~~
EXCERPT:
When the door to his hospital room opened, Tripp didn’t bother to glance up from the text he was trying to send one-handed. He fumbled the phone and swore then tossed it down on the bed. “Damn it. This sucks. I feel like a freaking invalid.”
“Problem?”
His chin came up as his gaze shot toward the doorway. Not Jake, who’d left to get something to eat and promised to come back later to drive him home. Hannah Ryder. His little sister’s old college roommate. Once in a while, when he was actually home and not to the far corners of the world, he caught sight of Hannah around town, but they’d never been anything but casual acquaintances at best. From the way her golden eyes narrowed on him, Tripp got the feeling she could take him or leave him…and would prefer the latter.
“I guess I wasn’t imagining you were on the hill this morning when they hauled me out of the avalanche.”
“No, you weren’t.” She advanced into the room and stopped a yard short of his bed. Hands tucked into the pockets of her down jacket, she regarded him steadily. “How’re you feeling?”
Strong was the word that sprang to mind as he studied Hannah. Those golden eyes reflected intelligence in their depths along with a mental toughness. Model tall but without scrawny angles, this woman looked capable of taking down any man stupid enough to mess with her without permission. Not that he’d ever try.
Tripp let out a breath. “Uh, I’m feeling okay. A little loopy from the pain meds. I imagine my shoulder will hurt like hell when they wear off.”
“Probably, but they’ll give you more drugs to manage any discomfort. I ran into a friend on the nursing staff out in the hall and got the basic facts. No fractures. That’s great.”
He scowled. “The dislocated shoulder is bad enough.”
“And only a mild concussion. You were extremely lucky. You could easily have been killed.”
He rolled his eyes. “Aren’t you Miss Glass Half-full. Lucky would have been not getting caught in the avalanche. Really lucky would have been finishing my run before the cornice broke free.”
Her golden cat eyes darkened to the color of her tawny-brown hair as she tucked a stray lock behind one ear. “I’ll report back to Eden that you’re not going to drop dead anytime soon…unless one of the nurses gets fed up with your bad mood and kills you.”
~~~~~~~~~~~~~

AUTHOR Bio and Links:
Write what you know. Jannine Gallant has taken this advice to heart, creating characters from small towns and plots that unfold in the great outdoors. She grew up in a tiny Northern California town and currently lives in beautiful Lake Tahoe with her husband and two daughters. When she isn’t busy writing or being a full time mom, Jannine hikes or snowshoes in the woods around her home. Whether she’s writing contemporary, historical or romantic suspense, Jannine brings the beauty of nature to her stories.
Social Links
Website Facebook Twitter
~~~~~~~~~~~~~
a Rafflecopter giveaway