I Can't Wait for... Light from Uncommon Stars by Ryka Aoki

Can't-Wait Wednesday is a weekly meme hosted over at Wishful Endings to spotlight and discuss the books we're excited about and have yet to read. Generally they're books that have yet to be released, but not necessarily. It's based on Waiting on Wednesday, which was originally hosted at Breaking the Spine.

Facebook Sets Sights On Clubhouse and…
The Important Details About An Evicti…
Short Happiness Quotes From Famous an…
The Pearl Hotel, San Diego
‘We were the luckiest people in the w…

My pick for this week is a rare sci-fi title, but with comparisons to Good Omens, references to queer alien courtship over fresh-made donuts, and no less than Charlie Anders praising how it captures the journey of a trans girl, I NEED THIS... 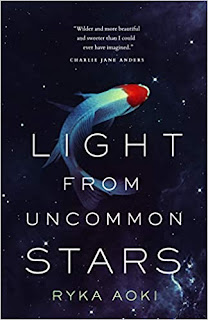 Shizuka Satomi made a deal with the devil: to escape damnation, she must entice seven other violin prodigies to trade their souls for success. She has already delivered six.

But in a donut shop off a bustling highway in the San Gabriel Valley, Shizuka meets Lan Tran, retired starship captain, interstellar refugee, and mother of four. Shizuka doesn't have time for crushes or coffee dates, what with her very soul on the line, but Lan's kind smile and eyes like stars might just redefine a soul's worth. And maybe something as small as a warm donut is powerful enough to break a curse as vast as the California coastline.

As the lives of these three women become entangled by chance and fate, a story of magic, identity, curses, and hope begins, and a family worth crossing the universe for is found.


This post first appeared on Beauty In Ruins, please read the originial post: here
People also like
Facebook Sets Sights On Clubhouse and Zoom With ‘Hotline’
The Important Details About An Eviction You Should Know More About
Short Happiness Quotes From Famous and Unknown People
The Pearl Hotel, San Diego
‘We were the luckiest people in the world’: a month on the last lockdown cruise
There’s Too Much Going on Today, No Time for Depression
International #StudentLoan: #ProdigyFinance student loan & #MPowerFinance (Part 1) | Ep #10 (2019)
Interview with the legendary comic book artist and writer William Messner-Loebs

I Can't Wait for... Light from Uncommon Stars by Ryka Aoki