A Tesla Model S will soon be starting a new life with the Fremont Police Department. In an announcement on Wednesday, the Fremont PD stated that it would be launching a pilot program to test out if battery-electric cars such as Tesla’s flagship sedan are cut out for full-time police duty. The upcoming deployment of the Model S also plays a part in Fremont’s overall goal of reducing greenhouse gases by 25% by 2020.

The Fremont PD opted for a 2014 Tesla Model S 85 as its first all-electric patrol car. The vehicle will be replacing a 2007 Dodge Charger, which will soon be taken out of service due to the vehicle’s age. The car was given a set of modifications specifically for police use, including an overhead light bar, a prisoner partition, headlight flashers, armored panels for the driver and front passenger doors, and a large, heavy-duty push bumper. The Fremont PD shared an image of the modified Model S, and it’s pretty difficult to deny that the all-electric car looks very good (and even a tad intimidating) as a patrol car.

As a full-on police cruiser, the Fremont PD’s Model S 85 will be doing the same tasks as its gas-powered counterparts. This, according to the city’s police department, means that the vehicle will be used heavily. In a document explaining the rationale behind its EV patrol car program, the Fremont PD noted that patrol cars are exposed to various stresses every day. For one, police cruisers drive around 40-70 miles a day, and maneuvers involving hard on and off braking, as well as hard on and off acceleration, are normal. Police vehicles are subjected to fast and quick steering maneuvers at high speed too, as well as extended idle periods where emergency lights and other police equipment are activated. 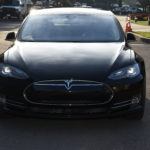 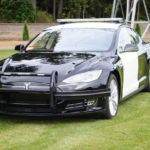 With a range of 265 miles per charge, the Model S 85 does seem to have enough battery power for an average day’s police work. The Fremont PD notes that the vehicle’s electric motor meets the requirements for hard on and off acceleration, and the Model S 85’s heavy-duty brakes, coupled with regenerative braking, meets the braking demands of patrol cars. The all-electric car’s low center of gravity also provides excellent steering and handling at high speeds. That said, the Fremont PD does have concerns with extended idle times, as activated emergency lights and other accessories might eat into the Model S’ range.

As noted by the Fremont PD, a notable advantage for its Model S 85 cruiser lies in its maintenance needs, or lack thereof. Being an all-electric car, the Model S has far fewer moving parts than the Dodge Charger it is replacing. Thanks to features like regenerative braking, the electric car requires fewer replacement parts, which, in turn, results in lesser downtime. Ultimately, though, the vehicle also helps Fremont transition towards sustainability, as addressed by Fremont Police Captain Sean Washington in a press release.

The Fremont PD captain’s reference on the city’s sustainability is no exaggeration. As noted in a CBS local report, the vehicle fleet of Fremont’s police department is responsible for 980 metric tons of carbon dioxide emissions every year. With its electric car fleet program, Fremont PD expects to reduce its fleet’s greenhouse gas emissions by up to 10%. The gas and maintenance savings presented by the Model S patrol car is also notable. Over five years, it is estimated that a Ford Explorer cruiser would consume around $32,000 in fuel, with an additional $15,000 in maintenance costs. The Model S 85 is expected to consume only a fraction of this cost.

Tesla’s electric cars have been used as police vehicles in the past. Back in 2015, the LAPD announced that it would be leasing two Model S P85D that will be used as pursuit vehicles for its electric car initiative. While the cars met the LAPD’s demands for performance and range, the vehicles were weighed down by their high price. The Denver PD also revealed its own Model S police car, though the vehicle was mostly used for community outreach events instead of everyday police work.

Perhaps the closest initiative to Fremont PD’s recently announced Model S cruiser is Luxembourg’s twin Tesla pursuit vehicles, both of which serve as rapid response patrol cars. A similar program was also launched last year by the Swiss Police, though the cars used in the initiative were Model X SUVs. Elon Musk later took to Twitter to express his approval for the Swiss Police’s initiative, even joking that with the Model X in service, “bad guys will definitely not escape.”