At a 2006 workshop in Geneva, founding members of the Bridging the Gap project presented a Scenario that posited a financial crisis originating in the United States that would bring on a global recession with painful economic consequences for Europe. Many workshop participants—scholars and policy makers—were incredulous: “That’s just impossible”… “It could never happen”…  “It’s a waste of time to talk about it”…

This story suggests both the challenge and the value of scenario analysis. Scenarios are often mistaken for forecasts, expert predictions, or simulations. They are none of these. Instead, scenarios depict possible future states of the world by combining theory and story-telling in rigorous and resonant ways to facilitate creative thinking. The Geneva experience is not important because the financial crisis scenario happened to be prescient. Rather, it serves to illustrate how hemmed in our thinking about the future can be—and how scenarios can help us break free of these constraints.

Royal Dutch Shell, the technique’s pioneer, says it uses scenarios to encourage leaders to stretch their thinking by asking “what if” questions about the world. In addition to their antecedents in corporate futures studies of the 1960s and 1970s, scenarios have long been used in the foreign policy making world—the National Intelligence Council’s series of Global Trends reports are one prominent application, intended to stimulate thinking about geopolitical change and its effects.

Scenario analysis constitutes the art of juxtaposing current trends in unexpected combinations in order to articulate surprising and yet plausible futures, often referred to as “alternative worlds.” Scenarios can also be constructed and used for the purpose of generating policy-relevant research in Political Science. This technique is used at the annual New Era Foreign Policy Conference, a scenario-oriented workshop for doctoral students in international affairs with a demonstrated commitment to policy-relevant scholarship. (At the 10th annual conference in March 2016, one of our participants described the interactive workshop as “political science nerd heaven.”). 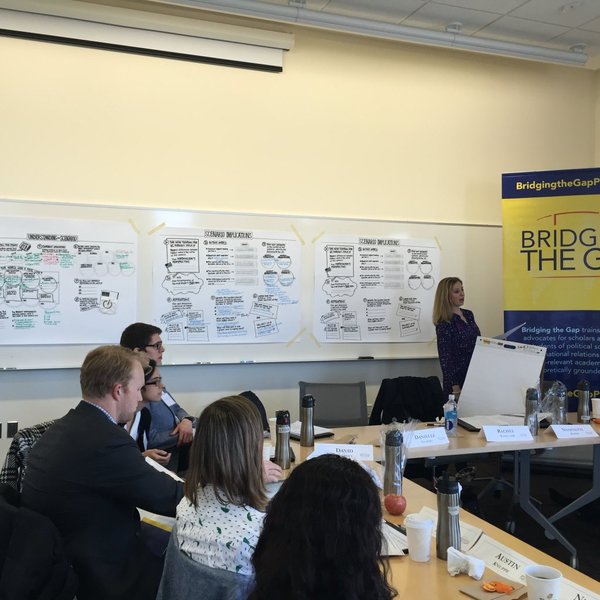 To illustrate the potential of scenario thinking for political science scholarship, let’s return to the global financial crisis we posited a year before it struck. We didn’t foresee that it was going to happen nor, exactly, how it might unfold. But we did recognize at the time, in constructing the scenario, a number of secular trends in the international economy. These included a housing asset bubble in the United States; an inability to resolve long-term economic stagnation in Japan; increasing fractiousness over financial governance systems within Europe; and an International Monetary Fund still struggling to find its footing and identity after its failures in the Asian financial crisis a decade earlier. Our scenario, as is typical with the technique, put together such trends along with others in parallel—although not obviously related—spaces: global recriminations over the Iraq War, working class families in economic stress, aging populations in the industrialized world, and the potential of major global refugee flows due to climate disaster or pandemic.

A political scientist imagining the world of this scenario in 2006, in turn, might have framed research questions such as:

The need for answers to such questions is evident today, in the face of Britain’s referendum vote to leave the European Union, the rise of populist and nativist political sentiment across the industrialized world, and the stresses crippling the multilateral organizations that the international community relies upon to address such global challenges. The point of using scenarios in political science is not to predict what will happen. Instead, scenario thinking can serve as a creative scaffolding to aid political scientists in recognizing emergent trends that might reshape the world around us—and thereby frame otherwise unseen research agendas to which the more traditional tools of social science theory and analysis can then be applied.