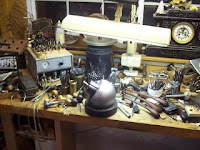 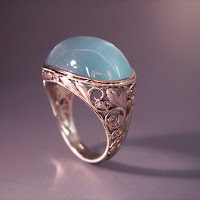 I heard about Tom Herman and Seven Finger Jewelers through my friend and mentor, Beth Rosengard. Tom’s classical work is absolutely stunning; and even more impressive upon discovering that his company was so named because as a small child, Tom lost three fingers in a farm accident. Clearly, Tom makes more with seven fingers than most of us do with ten but it is unusual enough that I started our interview by asking about it:

It’s no different than working with ten. I’ve never considered it a handicap, but it is distinctive so when I needed a name, I decided on Seven Fingers Jewelers. My high school years were hard, but as soon as I forgot that it was a handicap, then everyone else forgets as well. I go to craft shows with a back drop of my Seven Fingers Jewelers name and I’ll talk to customers sometimes two or three years in a row and they’ll sometimes say, “now why is it you call your company, Seven Fingers? “ And they will be surprised when I show them my hand…they just never noticed before.

Tom specializes in the ancient technique of Metal carving.

Chasing is one of the oldest techniques in the world. I do almost all chasing because I start with thick enough metal to carve into and then take the metal and use punches to define it. I consider engraving a very hard technique to learn, but chasing… tap tap tap… you have a lot of control over the metal and I find it so ungodly easy to do because I do it a little bit at a time. Once you put your hand to it and once you know how to hold your work, it becomes very easy. I don’t mean to belittle the technique; it does take practice, but all those amazing pieces we think of in history such as work by Lalique, was all made by regular people. I find the hardest part to get people over is the romantic Idea that it is really difficult to do this work. The point is to get off the romance and get on with the artistic part of it.

How would you describe your style?

Romantic I think and classical in many ways, combining organic forms and geometric balance. My work is inspired by Nature. I don’t think there is any better designer than Mother Nature and I feel like the ideas are never ending. I look for natural form in stone and cut the stone to enhance its natural beauty and then design the piece around that. I think of it as collaborating with nature. Also, if you look at any classical work, there is always an element of Focus. You can appreciate leaves because they are inside a frame. When you look at leaves in nature, there is no frame so you are not focused on them...the idea that you can’t see the forest for the trees…so that is the balance I try to put in my work, to focus the eye on the beauty of the design of nature by containing it within an architectural form that helps focus that beauty.
Like Faberge and Lalique, it’s that kind of quality I am after because it is timeless.. When I was 40, I saw a Lalique show and I realized that work was over a hundred years old. It is so poignant and so engaging that it is the kind of work I want to make; that is timeless and will endure year after year.

With much of your work priced in the five figures, how are you dealing with the economy?


I’ve been doing this for 30 years and I have learned many things over those years. I am not a pure artist. I have two kids and a wife and we have to make a living, so it is not just pure artistry. I don’t get to sit in my studio and think high thoughts, I have to make money. I believe the best way to do that is to use all the techniques that have been incorporated into my life and designing ability to make the very highest level work I can and that work will then find its own market because its beauty will attract people to it who can afford it.

What advice do you have for fledgling jewelry designers?

I think there is nothing more important than selling your own work. Galleries are good, but unless you are there watching people look at your work, you don’t get a true idea of whether you are touching them or not. I think it is really important to be there and watch people interpret your work. I find that there is nothing more valuable than seeing that. And, you really have to have the Desire to do this. The desire is everything. I worked the first 7-8 years and made not a dime. It isn’t the kind of work where you will get out of school and find a job that pays $70,000 per year. That’s not going to happen. So, it is key to follow your desire and focus your desire. And, you have to be self motivated. I still work seven days a week often 10-12 hours a day and it is because I like it. It is because there are things inside me I can’t get out fast enough.

I so enjoyed my time with Tom. What an incredible talent and such a lovely person!

Tom will be at the Grove Park Inn Arts & Crafts Conference from February 19-22 and then at the American Craft Council, Baltimore from February 27-March 1.

Thanks for stopping by! Sally
A blog showcasing accomplished jewelry designers. For artisan jewelry go to: www.naked-jewelry.com


This post first appeared on For The Love Of Jewels..., please read the originial post: here
People also like
What to wear: outfit ideas for Christmas & summer
Online Massage Therapy Courses, are you ready to start today?
Karen Wiesner: I Have Dreamed a Little Dream (Authors and Dream Inspiration), Part 2
how to control your thoughts - lovelcute
Barracuda beach Lagos: Fun things to do
Review: ‘Pinky’s Blues’ Sue Foley
Social Emotional Skills by Grade Level, Part II