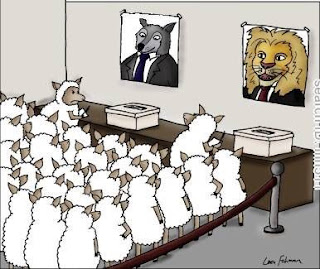 I spend a lot of time walking my dog. In fact, with summer, when I'm not working it's become my primary occupation. As it happens, my dog is a lot more charming and friendly than I'll ever be. Thus, I've met a whole lot more people walking my dog than I would have if I'd been alone.

One of my dog-walking buddies is a young man who works as a security guard. He's got this big dog named Roxie. She's on the older side, but she's one of very few large dogs my dog likes. They usually freak him out.

The other day the young man started lecturing me about politics. His father is a lifelong Republican, but has dropped out because he hates Trump. My friend says he's a committed independent because both parties suck. I agree with him, to a great extent, but I've maintained my registration as a Democrat so I can vote in the primaries.

He said voter suppression is a huge issue, and I agree. If you watch this film, it will give you chapter and verse on the GOP's unconscionable voter suppression tactics. My friend agreed that was happening, but said it was just the tip of the iceberg. I was doubtful he'd be able to back that up.

What he said, actually was, "Well, if they give you a choice between mud and shit, which do you choose?" This brought me back to 2016, where I eventually voted for Hillary against Trump, despite having enormous reservations. In fact, I tried to swap out my meaningless NY State Hillary vote with a PA blogger who went for Stein, but he wasn't having it. Well, I tried.

Still, wouldn't it be better if we could go out and vote for someone? Wouldn't it be great to vote for someone who actually inspired us? Hillary's best calling card was being not Trump. That, of course, is a great quality, a quality I very much want in our next President.

Biden is running way ahead of his rivals right now, despite debate performances that are lackluster at best. Kamala Harris hit him with some of his history and he didn't fare well with his response. In round 2, everyone seemed to gang up on him. While he didn't respond particularly well, he wasn't as abysmal as expected, and pundits called that a win.

The discussion on bankruptcy is going to be very difficult for Biden, particularly if he finally goes head to head with Elizabeth Warren. Warren has long stood for struggling Americans against credit card companies, Hillary Clinton was a far better speaker and debater on her worst day than Biden will be on his best, and the story didn't do her any good either. It's pretty clear whose side "middle class Joe" took when it came to credit card companies vs. consumers, and it's going to look bad if someone challenges him on it. He will not fare well if Warren or Bernie hits him, and perish forbid we wait until he's one to one with Trump.

Now it's true that Biden's state, Delaware, holds a whole lot of players in banking. Nonetheless, bankers are not precisely the populous. Biden has a PAC with no reservations about taking money from special interests. He's pulling in a whole lot of cash, but not from small contributors like Bernie is.

Now I like Bernie, but I'm not Bernie or bust. However, Bernie inspires people. That's his draw. Other candidates do the same, albeit to a lesser extent. I don't think anyone is jumping up and down waiting to vote for Biden. As of now, I'll vote for him against Trump if I have to. However, I won't do it with any particular enthusiasm. I don't have high expectations that Biden will address the ongoing issues that plague the middle-class Americans for whom he purports to speak.

Make no mistake, Trump is President because a whole lot of Americans who voted for Obama didn't get off their asses and vote. We can't let that happen again. Americans need someone to vote for, not only a demagogue to oppose. It's painfully challenging to imagine that candidate is Joseph Biden, whose best years, now past him, were not that great. Think of what Biden did to Anita Hill. You'll then envision maybe 5% of what Donald Trump and Fox will do to Biden.

Americans need someone they can support, someone who stands for what we do. Voting against Trump, repulsive though he is, is simply not good enough.