Higher Latent Demand for Work in May: American Job Shortage Number Up 150,000 to 16.75 Million on Soft Employment Report

Tags: number job shortage number american job shortage
June 2nd 2017
View original
The federal jobs data took a breather last month.
Although seasonally adjusted employment bettered yet again, from 4.4% to 4.3%, this morning’s Bureau of Labor Statistics report was a weak one.
The headline Number will probably be 138,000, the count of net new nonfarm payroll positions we achieved last month, on pace with population growth but no better, and almost 50,000 less than publicized projections.  Unadjusted joblessness held its 0.5% April improvement at 4.1%, and the number of Americans working part-time for economic reasons, or holding on to less than full-time propositions while seeking, thus far unsuccessfully, full-time ones, added to its last-time 300,000 improvement by dropping another 100,000, to 5.2 million.  There were 6.9 million unemployed, down 200,000 from April.

Useful Tips for Building a Stronger C…
Man Confronts Girlfriend For Wearing …
10 Attractive Circle Beard Styles & H…
Farm to School to Future!
Zuma Office – FREE Pentel Oil Pastel …
The other numbers, though, were discouraging.  The two indicators best showing how common it is for our countrymen to actually be working, the employment-population ratio and the labor force participation rate, each fell 0.2%, a lot for one month, to 60.0% and 62.7%.  The number of long-term unemployed, or those officially jobless for 27 weeks or longer, bucked its improvement trend with a 100,000 rise to 1.7 million.  Average hourly private nonfarm payroll earnings were up only 3 cents per hour, less than inflation, to $26.22.
On the marginal attachment front, the big news was in the “did not search for work in the previous year” and “not available to work now” categories.  These were up 1.53 million and 322,000 respectively, massive increases for one month, and added over 200,000 to latent work demand.  While the number of discouraged workers moved sharply in the other direction from 455,000 to 355,000, that was not enough to stop the American Job Shortage Number or AJSN from increasing 140,000, as follows: 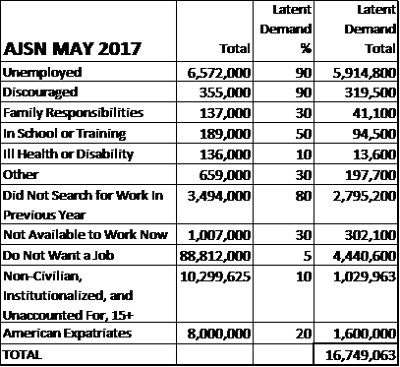 Compared with a year before, though, the AJSN still substantially improved.  The May 2016 number was almost 850,000 higher at 17.6 million, with almost all that difference in official unemployment and the did-not-search categories.  One cause for concern, though, is the almost one million gain in people non-civilian, institutionalized, and unaccounted for, or “off the grid.”  The share of those who would absorb new readily available jobs who are officially unemployed reached another long-time low, at 35.3%.
Although this month was hardly terrible, it was not good.  We need to continue looking at the numbers above, especially the participation rates.  If June’s data returns to the standards of earlier this year, we can still take credit for doing well, if hardly superbly.  In the meantime, the turtle stood still last month.

Higher Latent Demand for Work in May: American Job Shortage Number Up 150,000 to 16.75 Million on Soft Employment Report