I’m excited to be going to the now famous ‘State Bird Provisions’ run by Stuart Brioza and Nicole Krasinski tonight.

After a successful run at the city’s legendary Rubicon, the couple took an almost three-year leave from the restaurant game, cooking instead at private events. “It afforded us this bizarre freedom,” Brioza recalls. “Each dish was a small bite, so you didn’t have to commit to anything. It was like an hors d’oeuvres party—we’d bring out 16 different dishes and pass them.” Most improtant, he says, it was fun. Soon they found themselves trying to turn the hors d’oevre concept into a restaurant. They thought they’d found the perfect spot, but the site wasn’t coded to serve food. So the landlord offered them a smaller space in a former pizzeria. “We almost didn’t take it,” says Brioza. “We were very close to getting out of the business altogether.” Thankfully, they signed.

I have actually been there two times before and it certainly is the best restaurant and food I enjoyed in many years. 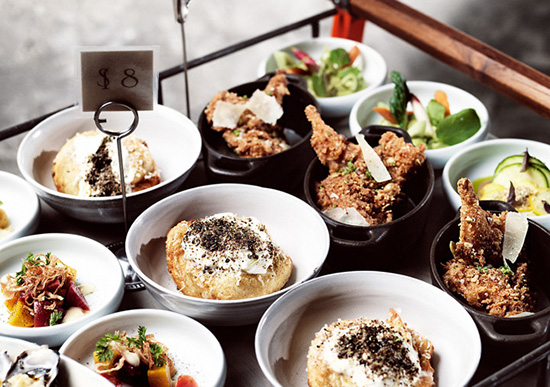 How did you like your visit to State Bird Provisions?