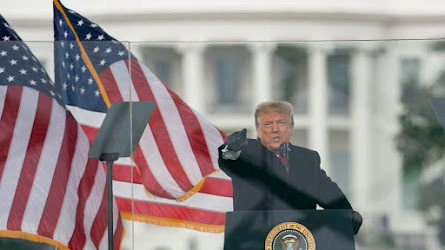 With a growing number of lawmakers calling for President Donald Trump to be removed from office through the 25th amendment to the Constitution, FAMU College of Law Professor Seema Mohapatra explains the amendment.

The amendment lays out plans for what to do if something happens to the president. Part one says if he dies, the Vice President becomes president.
Section two details how to replace the vice president.

Part three allows the president to give power to his vice president, like when President George W. Bush did before medical procedures.

“The fourth provision has not been used before and is being talked about now,” Mohapatra explains. “The clause was written by former U.S. Sen. Birch Bayh (D-Ind.) — added a fourth clause to it.”

“He (Bayh) wrote in a book that that the fourth provision of the 25th amendment, he wrote thinking that it was when the president was, quote, as 'nutty as a fruitcake,’ " she said.

Essentially, this section allows executive officials to declare that the president is unable to fulfill his duties and makes the vice president the acting president.
“There has to be a will for majority of Cabinet and the vice president to use this and it's not clear that that's there,” she explained.

There may not be enough time left to invoke the provision, with less than two weeks before the new administration is sworn-in.

Mohapatra says if Trump objects to losing his powers, the Cabinet gets four days to try to overrule it, and then Congress could take weeks to debate and make a decision.

Sex Tips for Men: How to Be Better in…
7 Techniques for Bitcoin Beginners
What it Feels Like to Not Get the Job
Interview with the legendary comic bo…
How and Why America Was Hit So Hard B…