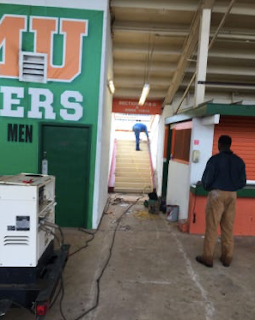 Tomorrow, City and County Commissioners sitting as the board of the Blueprint Intergovernmental Agency will consider FAMU President Larry Robinson’s request for a $10 million investment to make critical repairs to Bragg Memorial Stadium.   Without the funding, FAMU would likely not be able to use the 67-year-old stadium for the 2021 football season.
The report evaluates the proposed project’s broader economic benefits, measured in terms of economic output (the value of industry production), local employment or jobs, and income or wages. The report estimated that the total one-time economic benefits associated with the FAMU Bragg Stadium retrofit and upgrade and the construction phase of the project will generate $26, 041,739, create 166 construction jobs and provide $7,670,712 in income or wages.
In summary, the construction (temporary) from the project will result in $12.5 million in direct economic output (total economic activity generated by the project) with an additional $13.5 million in output from indirect and induced economic activity.
Based on this analysis, the City of Tallahassee and Leon County would more than double their $10 million investment in the first year.

BetPay.ng (How to Book A Bet, Become …
How and Why America Was Hit So Hard B…
West Runton Camping & Caravanning Clu…
COVID-19 Shelter-In-Place Polaroids
India can be the epicentre of global …