Adam Vettese, UK Market Analyst at eToro, has provided his daily commentary on traditional and crypto markets for February 14, 2020.

On Thursday on its quarterly earnings call, Chinese technology giant Alibaba set out a multitude of ways in which its business is being impacted by the coronavirus epidemic. CEO Daniel Zhang warned that the outbreak is significantly impacting China’s economy and has the potential to impact the world economy. He detailed that package deliveries have been delayed as the virus has prevented employees from returning to work after the Spring Festival public holiday, and that merchant operations on its e-commerce platform have not returned to normal.

While basket sizes have increased as more people have turned to online shopping for daily necessities instead of going out, there have been limitations on delivery capacity. Zhang also flagged “material” levels of cancellations through Alibaba’s travel booking service. Many of Alibaba’s units have also been working to help manage the crisis, including launching fast track channels for medical supply delivery and introducing digital health check-in features for companies to keep track of their employees’ health status. Alibaba stock closed 1.8% lower, although investors will have to wait until next quarter for hard data detailing the virus’ impact on revenues and profits, as the quarter reported on Thursday ended on December 31.

Royal Bank of Scotland, the bank which was effectively nationalised at the height of the credit crisis, has today reported its profits have doubled year-on-year, hitting more than £3bn a decade on from its lowest point.

The bank said it had seen profits jump from £1.6bn for the full year 2018 to £3.1bn for full year 2019. It also set out its own plans on climate change, vowing to make its operations net carbon zero in 2020 and climate positive by 2025, as well as reducing the climate impact of its financing activity. It said it planned to “at least halve the climate impact of our financing activity by 2030 and intend to do what is necessary to achieve alignment with the 2015 Paris Agreement.”

The results come following a tougher spell for its shares, which have near-halved over the past five years from almost 400p to yesterday’s close at 229p. 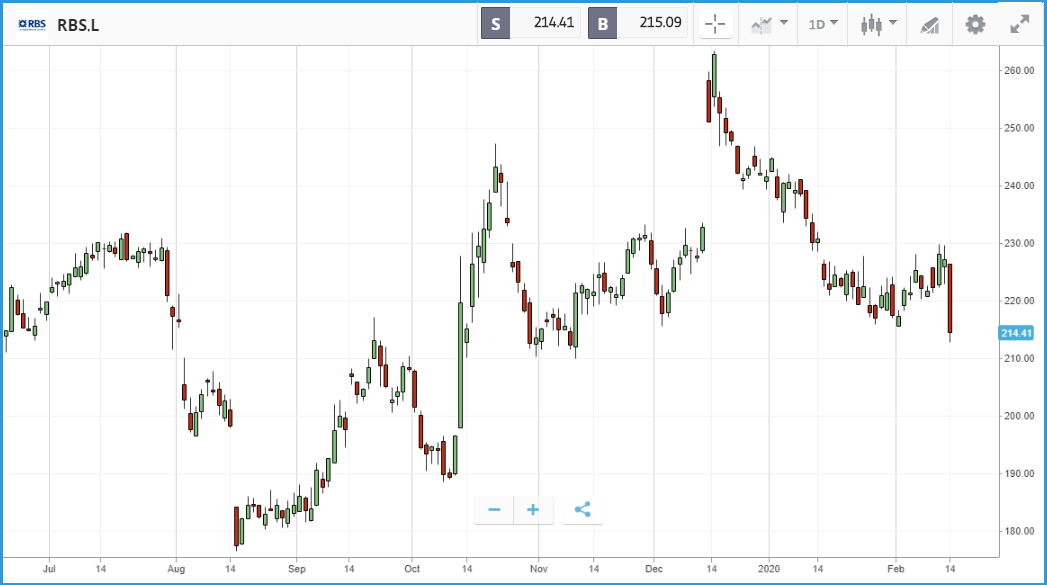 After riding higher on optimism that the spread of the coronavirus was slowing, US shares slipped on Thursday after a jump in the number of reported cases. The slip was minor, however, with the S&P 500 down just 0.2%, including major names which sunk for reasons unrelated to the epidemic. One big loser was Kraft Heinz, which took a dive on Thursday after it announced its Q4 earnings. It beat expectations on the profit front but also reported a significant sales decline, with shares in the firm taking a 7.6% dive after the numbers were revealed. This leaves the company’s shares down over 40% over the past 12 months. In other corporate news, Amazon succeeded in winning a temporary injunction blocking Microsoft from proceeding with a $10bn Pentagon contract, which it argues Microsoft was awarded because of President Trump’s personal feud with Jeff Bezos. Both Microsoft and Amazon closed around 0.5% down following the ruling.

British stocks had more than just the coronavirus figures to contend with on Thursday, as investors also had to digest an unexpected Cabinet reshuffle. Chancellor Sajid Javid resigned after refusing to sack advisors that Prime Minister Johnson wanted out. Javid has been replaced by Rishi Shunak, who less than a year ago was a junior housing minister. The FTSE 100 fell by 1.1% on the day, joined by the FTSE 250 which sank by 0.6%. Only five stocks in the FTSE 100 posted a share price increase of more than 1%, with a dozen names tumbling by more than 3%. British Gas owner Centrica was the biggest faller among the UK’s largest companies, closing the day 15.3% lower after reporting a £1.1bn loss in the final quarter of 2019, which it blamed in part on the Government’s energy price cap. After a week that saw William Hill’s share price rise double digits, following the announcement of a new media partnership, the gambling company fell 7.7% on Thursday after the chief executive of the Gambling Commission, Neil McArthur, said it is considering a proposal to cut the maximum stake allowed on online casino games to £2. GVC, which owns Coral, also fell by 7%.

Enbridge: New York-listed Enbridge is an energy transportation firm based in Calgary. Since the start of September its share price has risen by more than 25%, and the stock also offers a near 6% dividend yield. The firm has been benefiting from progress in the approval process for some of its major pipeline projects, and investors will be listening closely for updates on Friday when the company provides its latest quarterly update. Currently, the average price target on the stock from Wall Street analysts is $42.69, versus its $42.02 close on Thursday.

PPL: Pennsylvania-based energy company PPL is another significant dividend payer, with a yield of more than 4% even after its share price gained more than 20% over the past six months. Since summer 2018, PPL stock has been digging itself out of a hole, after losing more than a third of its value between June 2017 and June 2018. The company is currently investing billions in expanding capacity and technology improvements, but analysts are mixed on its prospects. Currently, five rate the stock as a buy, and eight as a hold. PPL reports its latest set of quarterly earnings on Friday.

Newell Brands: Newell is the firm behind brands such as Sharpie, Marmot and Rubbermaid. Its share price is up close to 25% over the past six months but has been in the doldrums for years. From the start of July 2017 to the end of May 2019 it fell 75%, and the company has been going through a major turnaround effort that included selling non-core businesses to focus its efforts and bring its debt burden under control. The firm has a price-to-earnings ratio of around 11, and posted a significant earnings beat in Q3 with management raising its forward outlook. Investors will be watching for continued signs of momentum when it delivers its Q4 update on Friday.

Cryptoassets continue to be one of the standout performers of the year, with some coins up nearly 100% year-to-date. Bitcoin, which went through the $10,000 mark last weekend, continues to consolidate, hitting $10,260 during overnight trading before settling back at $10,093 this morning.

Meanwhile Ethereum hit a day high of $268, its highest level since July, before retreating marginally to $258 this morning. Finally, XRP, which saw a sharp rally yesterday, was off over 2% today, but has rallied significantly year-to-date, up from a starting level of nearly $0.19 to today’s price of $0.31.

All data, figures & charts are valid as of 14/02/2020. All trading carries risk. Only risk capital you can afford to lose.

This is a marketing communication and should not be taken as investment advice, personal recommendation, or an offer of, or solicitation to buy or sell, any financial instruments. This material has been prepared without having regard to any particular investment objectives or financial situation, and has not been prepared in accordance with the legal and regulatory requirements to promote independent research. Any references to past performance of a financial instrument, index or a packaged investment product are not, and should not be taken as, a reliable indicator of future results. eToro makes no representation and assumes no liability as to the accuracy or completeness of the content of this publication, which has been prepared utilizing publicly-available information.