According to Google Trends data reporting, ‘sapphire Engagement rings’ search was up 115% over the year 2017.  The trend continues to spike into 2018  with a two very influential women choosing a sapphire over a diamond.  Brides-to-be Gwyneth Paltrow and Princess Eugenie debuting stunning Sapphire Engagement Rings within a matter of days of each other, you can expect for the gemstone to continue its rise in popularity.

The sapphire has been a perennial favorite amongst European aristocracy as an engagement ring centerpiece but has mainly settled as complimentary stones to the diamond engagement rings favored stateside. With the vast array of colors availability, strength and durability, and a much friendlier price tag to diamonds, the sapphire is set to move front and center for engagement ring designs.

“Nearly all of our business is for engagement rings, and volume continues to go up year over year with 2017 being a major jump for us.” -Michael Arnstein, President of The Natural Sapphire Company, an 80-year-old 4 generation business specializing in sapphires.
“Demand is worldwide; this isn’t just a trend in the USA.”

Gwyneth Paltrow revealed an estimated 12 ct deep blue sapphire engagement ring over the weekend as she presented Ryan Murphy with the Norman Lear Achievement Award in TV at the Producers Guild Awards in Los Angeles. Fiance Brad Falchuk and Gwyneth Paltrow had publicly announced their relationship in 2015, the two have met on the set of Glee in 2010.

Princess Eugenie, along with the Royal Family, announced her engagement to longtime boyfriend Jack Brooksbank, showcasing a gorgeous sunset-colored padparadscha sapphire and diamond engagement ring in the official palace photos.

Penelope Cruz, upon her engagement to Javier Bardem, also revealed a stunning oval blue sapphire ring on her finger that has a unique vintage quality.

Arnstein insists that the gemstone isn’t as plentiful as diamonds, and says prices continue to rise as quickly as demand increases.  “In most industries getting customers is the challenge, for us it’s finding good sapphires and enough for the list of customers waiting for next special stone to come out of the ground.” 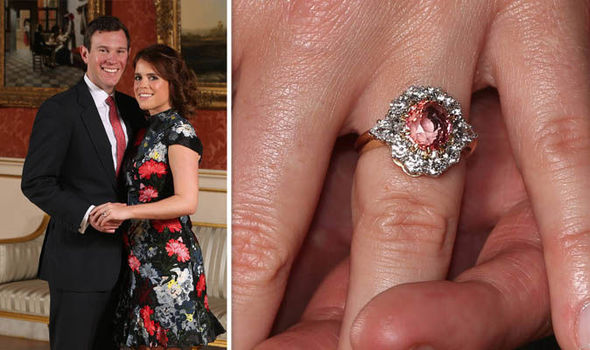