Send every child to school, not work :: #BACKTOSCHOOL

More than seven decades of independence from a foreign rule, yet we haven’t been able to free the Children of our country from the clutches of hunger, malnutrition, and illiteracy. Enormous efforts from the government, social organisations, and the civil community is indeed bringing some change but this humongous challenge still haunts the country. Well, education is the only panacea to this prevailing condition. And, that’s why The Akshaya Patra Foundation, a mid-day Meal NGO conducts Back to School campaign each year. 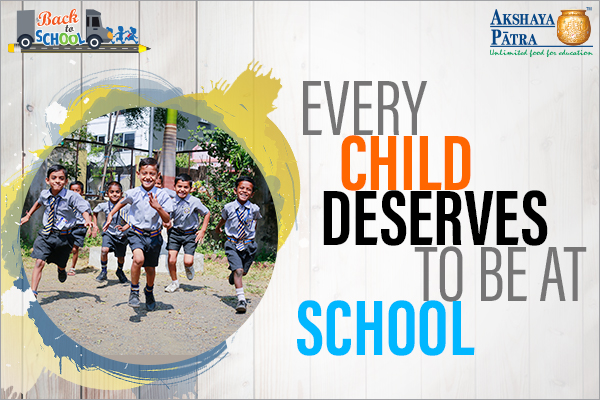 Importance of schooling
For many children coming back to school could be just another thing, but for a majority of children it is the only thing they wait for! Yes, as per a report in 2015, about 13.5 million children in India are out-of-school. The reasons are many but the most crucial being, hunger and poverty. When the stomach growls, we need food but when we don’t have the money to buy food, we go out to work – this is the condition that deprives a large section of children from attending school. Schooling supports development of children in many ways:

After much government and non-government efforts and awareness, people are gradually understanding the importance of education and are more willing than ever to send their children to school but hunger still poses a roadblock. This is where the Mid-Day Meal Scheme proves to be a symbolic intervention. This scheme has been instrumental in increasing school enrolment, regularising attendance and bringing children back to school year after year, thereby contributing to continuity in education.
Mid-day meals incentivise parents to send their children to school with the hope that they will get at least a plate full of meal for the day. And once children are in school, they automatically get involved in reading, writing, and other school activities.

The Akshaya Patra Foundation is a mid-day meal NGO providing nutritious mid-day meals to 17,62,133 children in more than 15,000 government schools and government-aided schools across 42 location of 12 Indian states. It is one of the oldest mid-day meal NGOs with 18+ years of service to children. The Foundation strongly believes in its vision of ‘No child in India shall be deprived of education because of hunger’ and that’s why aims to feed 50 lakhs children across the country by 2025.
Several studies in association with third-party research organisations have revealed significant improvements in the below parameters:

‘Back to school’ campaign by Akshaya Patra

To ensure each and every beneficiary gets the much-needed opportunity to continue education, Akshaya Patra conducts ‘Back to School’ campaign every year. Through this campaign, the NGO encourages the mass to support daily school meals of children. Join in the campaign instantly
By contributing online donations.
Impact numerous children by creating a fundraising campaign.
Spread the word in your social network.
LET’S TOGETHER TURN ALL THE ROADS TO SCHOOL AND PREVENT CHILDREN FROM LABOURING TO EARN A SQUARE MEAL. STEP FORWARD AND ACT NOW. 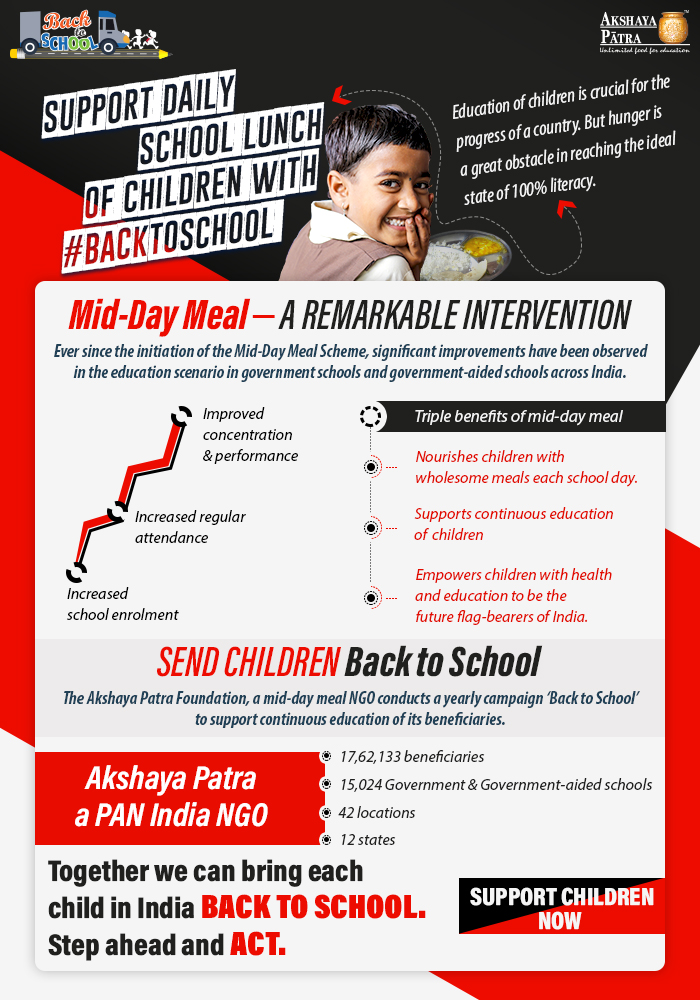 How to Tell if You Have Bed Bugs?
How Gender Equity Impacts the Bottom …
Short Happiness Quotes From Famous an…
“The Friend Who May Not Seem a Friend…


This post first appeared on Start Your Business With Tinder App Script - Online Business, please read the originial post: here
People also like
How to Tell if You Have Bed Bugs?
How Gender Equity Impacts the Bottom Line
Short Happiness Quotes From Famous and Unknown People
“The Friend Who May Not Seem a Friend”: The Cat and the Fire, Part 1 of 3

Send every child to school, not work :: #BACKTOSCHOOL