Exclusive: New Leadership Wins And Takes Over In Edinburg 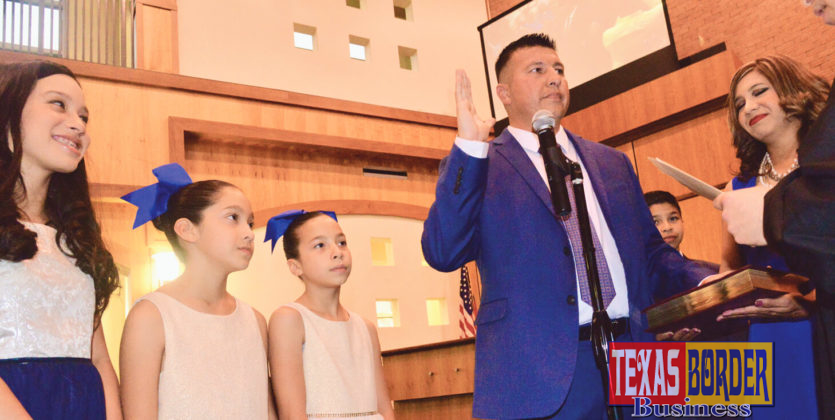 Richard Molina taking oath of office, surrounded by his family. His wife Dalia, as he said, “the amazing Wonder Woman, my partner in absolutely everything that I do”, and his children Vanessa, Richard, Kelley, and Diamond. Photo Roberto Hugo Gonzalez 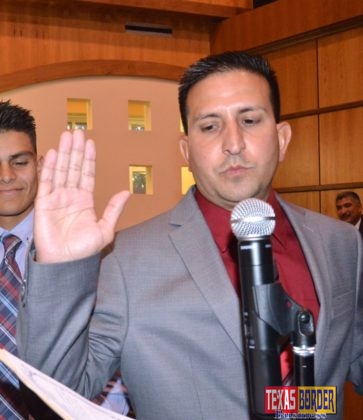 City Councilmember-elect Place 1 Jorge “Coach” Salinas said he decided to run because, after 16 years of serving the community as a teacher and a coach, he believed it was time to “do this at a larger scale.” An Edinburg native, he grew up on the west side of the city. He has served the community and its children for 16 years as a teacher and a coach with Edinburg CISD; and is currently employed at B.L. Garza. His parents are José Luis (JL) and Arminda Salinas. He and his wife, Yovann, have two children, Brian and Kristen. 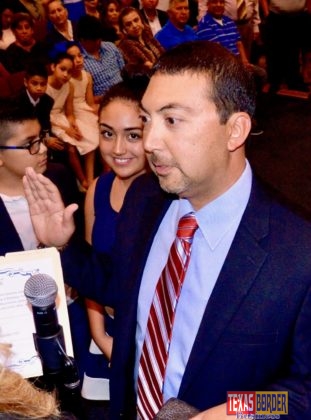 Councilmember-elect Place 2 Gilbert Enríquez is the president of E-Con Group, LLC., a family-owned business specializing in construction and development. He brings more than 15 years of experience in public service. A former commissioner for the Edinburg Planning and Zoning department, he also served as former Edinburg School Board trustee from 2000-2006, and was a director of the ESC Region One Board from 2013-2016. He has sat on the board of directors of numerous local organizations, including the Edinburg Boys and Girls Club, Edinburg Parks and Recreation, University of Texas-Pan American Athletics and the Valley Alliance of Mentors for Opportunities and Scholarships (VAMOS). Today, he is a member of the board of the American General Contractors Association and serves as president of the Robert Vela High School Sapphire Booster Club. Born and raised in Edinburg, Enríquez is a 1992 graduate of Edinburg High School. He obtained a Bachelor of Business Administration in Accounting from The University of Texas-Pan American in 1996.

“I, first and foremost, I want to thank Jesus Christ, my Lord, and my Savior. It is because of Him that we’re here today.”

The City election in Edinburg created great expectation within the city and the region. As always, everyone had its own opinion of who was going to win. The general comments were in favor of the incumbent, Mayor Richard Garcia, but on the night of November 7, 2017, the results were surprising for many. Even Richard Molina, the challenger, at one point of his campaign, had doubts. Nevertheless, Molina’s intensive campaigning produced the number of votes that got him over the top.

On November 15, 2017, the new officials took part in a symbolic ceremony to take the oath of office; the official ceremony had been officiated one day before.

The commissioner’s boardroom, where they met was filled with friends and family of city officials that won the campaign. It was difficult to contain them; the crowd was rejoicing the victory.

Many of them, speaking at the same time made the commissioner’s room noisy and difficult to hear. But all of it was understandable; they had secured a victory that was classified impossible to win; Molina 4,519 votes or 53.66% and Garcia 3,268 or 38.93%. Members of the press were ready, waiting to start to take part in the symbolic ceremony.

“We’re here to witness firsthand the swearing in of Edinburg’s 22nd mayor and two new council members,” announced Irma Garza, Public Information Director; she acted as the Mistress of Ceremony. “We are very honored that you took the time to be with us this afternoon.”

It was also mentioned that Edinburg was first incorporated in 1919 by only 51 voters casting a ballot. Baker, Anderson Yancey (1874–1930) was the city’s first mayor.

Immediately after, the Honorable Judge Luis Singleterry got ready to administer the oath of office to the new mayor. Judge Singleterry said, “Before we get started I just want to say congratulations to you, Richard, to the Molina family, to all the gentlemen, the newly elected officials. This is an exciting time for you; and exciting time for the city. I met Richard a few years ago on the campaign trail. I know how hard he worked and I am sure and confident he’s going to work just as hard for the city of McAllen, sorry for the city of Edinburg.”

Yes, the judge made a small mistake, and Molina was not going to let it go, and he said, “Watch out Judge. We polled more votes than McAllen over here.”

The judge explained, “I have a meeting in McAllen that I need to attend in a few minutes; that’s why I was thinking about McAllen.”

Mayor Molina took over the podium and said, “I’m going to be brief because we have a lot of work to do. But in a short time over probably four and a half to five years in my young political career I have found out the positive and the negative of politics.” He continued, “Guess what’s positive with politics? You find out who your true friends are. Unfortunately, the negative thing is you also find out who your true friends are.” That comment motivated the crowd, and he got a good applause.

“Today is about Edinburg. I know you’re grabbing me I know you’re reaching out to me. I see you. I appreciate you being here.” He said, “Every single one of you, it means the world to me.”

He also pointed out that it is not about who the mayor is. It’s not about who the council members are? “Today it’s about the people who have spoken and taken action about change. As we begin this journey together I, first and foremost, I want to thank Jesus Christ, my Lord, and my Savior. It is because of Him that we’re here today.”

Mayor Molina said that he was familiar with the room where the event was taking place, and not only as a councilmember but as a police officer. “I stood on the back of this room just like the gentlemen who are here today. And I watched, and I observed elected officials making decisions that affected every one of us in Edinburg.” He said, “I wasn’t happy with what I was watching as it happened right before my very eyes. I bowed to another police officer in this room and looked at him, and I said one day I would run for mayor. He laughed and said, ‘Molina it will never happen.’”

Also, he said, that in 2013 when a council member vacated his seat, he was talking to his dad and brother in the living room of his house. The conversation was about whom they should support to run for that vacated seat. “My brother Ray tells me, ‘stop complaining and why don’t you run?’”

Mayor Molina and his brother drove to city hall as he said, ‘completely clueless’ about the process on how to file. He soon found out that dealing in this field is another world. “After the first week, in all honesty, I wanted to quit because of all the rejection that we received. But I had already swum too far into the ocean to head back to shore.” He continued, “We won against the odds. We won. We won then, and we won now. Not because of me but because of every one of you. I wanted to be your voice,” Mayor Molina said.

As he addresses his supporters, they became loud and louder especially when he said, “We had a record-breaking voter turnout for this election. The most votes in the history of Edinburg. We surpassed even the number of votes that are cast in larger cities like McAllen.” With a louder voice, he said, “That was you speaking out. That was you wanting something better. Let’s keep making history.”

One of his campaign promises was on term limits for public servants. He said, “No more career politicians in our city; and it begins with Richard Molina.”

Another promise is to separate the mayor’s job from being on that Economic Development Corp. He said, “No one person needs to have that much control over your tax dollars; that is on the agenda tonight by the way.”

As he continued, he reminded them that he was going to follow people’s concerns. “I heard you during this campaign, I heard your concerns, and I heard your stories. We’re going to tackle the things that matter to you; better streets, better lighting in your neighborhoods, fixing our never-ending drainage problems. We’re going to build parks for all children and families to enjoy. We have a lot of work to do, and we will get it done. Get ready for an Edinburg like you’ve never seen before and it starts tonight right after this ceremony.”

One thing where many politicians fail is to thank the people closest to them. Not Molina, he said, “I do need to take the time to thank some very special people; my wife Dalia, the amazing Wonder Woman, my partner in absolutely everything that I do; my children who have been the best sports about sharing daddy’s time during the campaign. Thank you, Vanessa, Richard, Kelley, and Diamond.”

Molina was completing his first term as a city council member when he decided to seek the office of mayor. Enríquez, who has previously served as an elected official on the Edinburg school district’s Board of Trustees; and Salinas, a political newcomer, were joined by incumbent Councilmember Homer Jasso, Jr. and Councilmember David Torres on the city’s elected-city governing body. TBB

Mayor-elect Richard Molina graduated from Edinburg North High school in 1996. He is a U.S. Army veteran who served in Operation Joint Forge-Bosnia and was honorably discharged. Molina was an employee of the Hidalgo County Sheriff’s Department and later served as an Edinburg Police Sergeant for 11 years. He is now the owner and manager of Molina Rental Properties in Edinburg. He has volunteered to sponsor and coach teams at the Edinburg Parks & Recreation Basketball League. He is also a current member of the Lions Noon club and the Edinburg Chamber of Commerce. He is married to Dalia Molina and they have four children, Vanessa, Richard Jr., and twin girls Kelley and Diamond.

John Duran – The Mayor Of West Hollywood Alleged Of Harassment, Asked To Step Down

Exclusive: New Leadership Wins And Takes Over In Edinburg