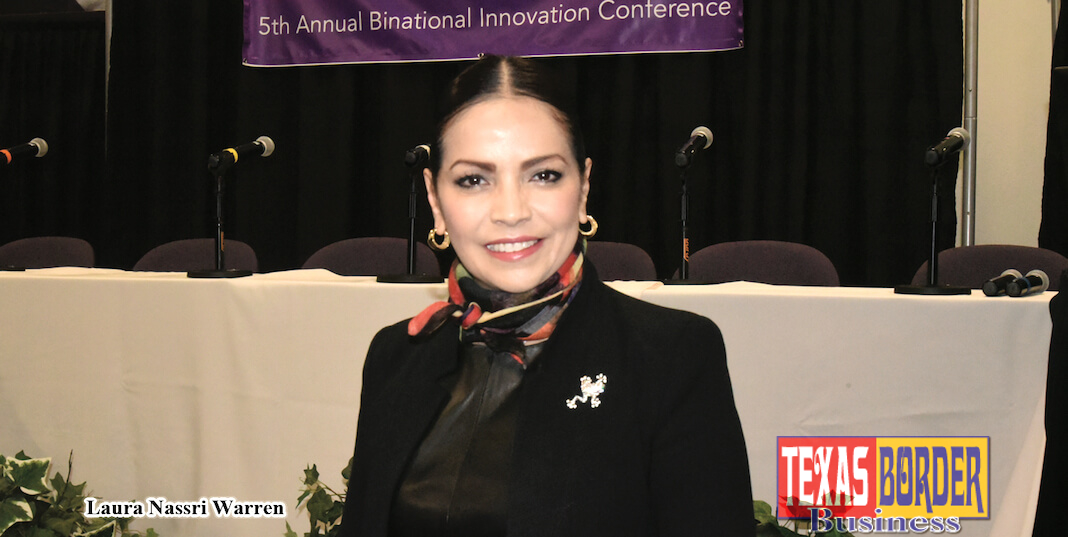 Laura Nassri Warren, AIA, of The Warren Group Architects Inc. (TWG). Warren said the Rio Grande Valley became her home since 1995. She recognizes she has met “wonderful leaders” at the McAllen Economic Development that showed her the great opportunities that she is now involved in the Rio Grande Valley.
She founded and established TWG in 2004 in McAllen, Texas and operates from two locations; McAllen and Austin, Texas. It is a service oriented architectural, planning, interior design and project management firm. Her firm has built a reputation by providing innovative and practical design solutions to her growing customer base worldwide.

how to improve vision in 7 days
Karen S. Wiesner, Tension and Twists,…
Wuzzuf’s Ameer Sherif Steps Down as C…
Afghanistan’s Pivot to Crypto: Will I…
Discover the Magic of Venice in Novem…

The audience sat quietly but very attentive to what they heard from Warren, a successful architect in South Texas who has the knowledge and the pulse of what happens in urban development on both sides of the U.S./Mexico border.

Her audience, a very distinguished group of people from a wide range of industries, economic development professionals, mega investors as well as industrialists from the region packed into STC’s Business and Technology Campus in McAllen. The INNO conference is one of the signature events offered by STC.

“It is an honor to be here as a speaker among such creative, talented and successful people,” she said as she began her presentation.

Even though her company was established 14 years ago, she has been in the planning, construction management, and proactive services for about 33 years. Currently, Warren is the new chairman of the board for McAllen Economic Development Corp.

One of her advantages in development is the experience and what she has learned of working with different ideologies and markets. “I have learned to identify different factors that make or break a development,” she told the audience. “We see large investments being placed and sometimes being abandoned, frankly, it is quite sad.”

According to Warren, exciting things in urban development still happen, as an example she pointed out the Tres Lagos Master Planned Community in McAllen and La Sienna in Edinburg.

She touted that the creation of the new university and the expansion of Texas A&M are also making these projects extremely palatable and added excitement in the development of others.

“So, what are those factors?” she asked. According to Warren, people who have been successful developers in her opinion have identified a market base or a land, for example College Station has become its own college town.

She said she can also see major hospital and medical developments through this region. “Several facilities well-known for cancer treatment in Houston and hopefully now in the Rio Grande Valley.”

Warren also said that if the region is having another mode of industry and base of development it is important to have the infrastructure to support it. She emphasized that utilities for immediate use and for future expansion. In addition, “Is also important to have access to rail, housing, roads, and labor.”

Highlighting the fact that skilled labor is extremely important for the manufacturing industry, governmental support, housing and community.

“We can no longer say that we are on an island and nothing affects us.” As she unfolds her message, people agree that no matter where you are the globalization of commerce makes us closer to one another. “Things that happen in China, or in the Middle East affect us greatly and quickly,” she said.

The fact that she worked with a large bi-national mixed-use development, the Santa Teresa and San Geronimo developments in El Paso and Juarez, Chihuahua, opened the doors for her locally. She was hired by Mr. Ray Hunt of the Hunt Development company.

As many of you know, the Hunts are big developers. They purchased about 6,000 acres along the border of Texas and Reynosa, Tamaulipas Mexico. The passing of NAFTA made this acquisition even more unique. The McAllen Economic Development Corp. has been paramount to the growth of the Maquila industry which stands at about 200 maquiladoras, employing over 87,000 people and growing; this according to Warren.

Warren also said that the creation of another bi-national development closer to us, took place after two giant businessmen met, Don Ramiro Garza Cantu from México and Ray Hunt from Houston.

Warren said that in the early 1990s, the idea was to create something bi-national with an international bridge in this region. According to Laura, this project was more successful than the one in El Paso/Juarez. The key, only two owners; one owner on each side of the border.  Mr. Ray Hunt on the U.S. side owning 6,000 acres and 17,000 acres by Don Ramiro Garza Cantu of Grupo Rio San Juan on the Mexico side.

The idea was to create a bi-national community, where people could work, eat and play on both sides of the border, with its own bridge. “Currently, there is some land still available for those developers, if interested,” said Warren.

Warren underlined that the investment for both developments was huge, respectively, and in order to make these two projects a reality, the developers were ready to keep investing. On the U.S. side, Ray Hunt donated 475 acres of land in Mission, Texas to help build and fund the Anzalduas bridge and highway. The bridge opened in January 11, 2010 and allows international traffic between Mexico and the United States. The 3.4-mile bridge, it’s the longest service international crossing that connects the two countries. For those who haven’t gone through the Anzalduas Bridge, you get on Bryan Rd. and it will connect you to Highway 69.

She said that the area is made up of different cultures and ways of living, and in the United States in order to make it attractive, and for people to buy homes it has to be near where they live. “The income field is different for people who are involved in the manufacturing industry.”

“When Ray Hunt had this vision, we made sure to have homes ranging from $65,000 to a million dollars.” She said, “This community now houses one Jr. High or middle school. It has two elementary schools, one church, and several amenities like a sports park, business center, and several trails that connect all the communities. Making it a very cohesive and successful development.”

Warren said that from an investor prospective, all the above is an attraction, especially for top companies like Black and Decker, Motorola, Corning, and Panasonic, among others.

Keith Patridge, the EDC president has also announced that there is interest from manufacturing companies wanting to move here. However, Warren said, “Again we’re out of space, so, if there’s a developer who’s interested in building something, Mr. Patridge welcomes them and is ready to discuss possibilities. Things have not slowed down.” 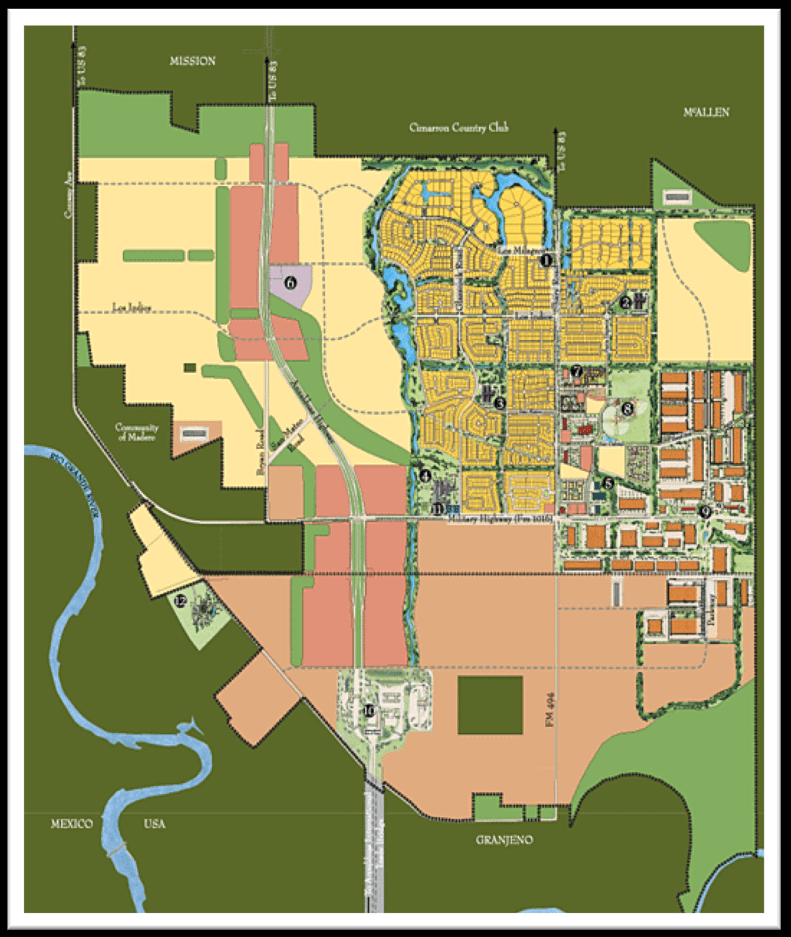 Warren said that Sharyland Plantation is one of the largest master-planned, mixed-use developments on the Texas-Mexico border and includes industrial, residential, commercial and recreational uses.

On the Mexico side, the development is Villa Florida Industrial, a 17,000-acre International Development located in Reynosa, Tamaulipas, Mexico. This community provides an affordable live/work environment for Top 100 companies and employees. More than 800 homes in 2 Master Planned neighborhoods. 4,500,000 SF of Class A industrial space (28 buildings) and 400,000 square feet of retail/commercial space exist within Villa Florida. 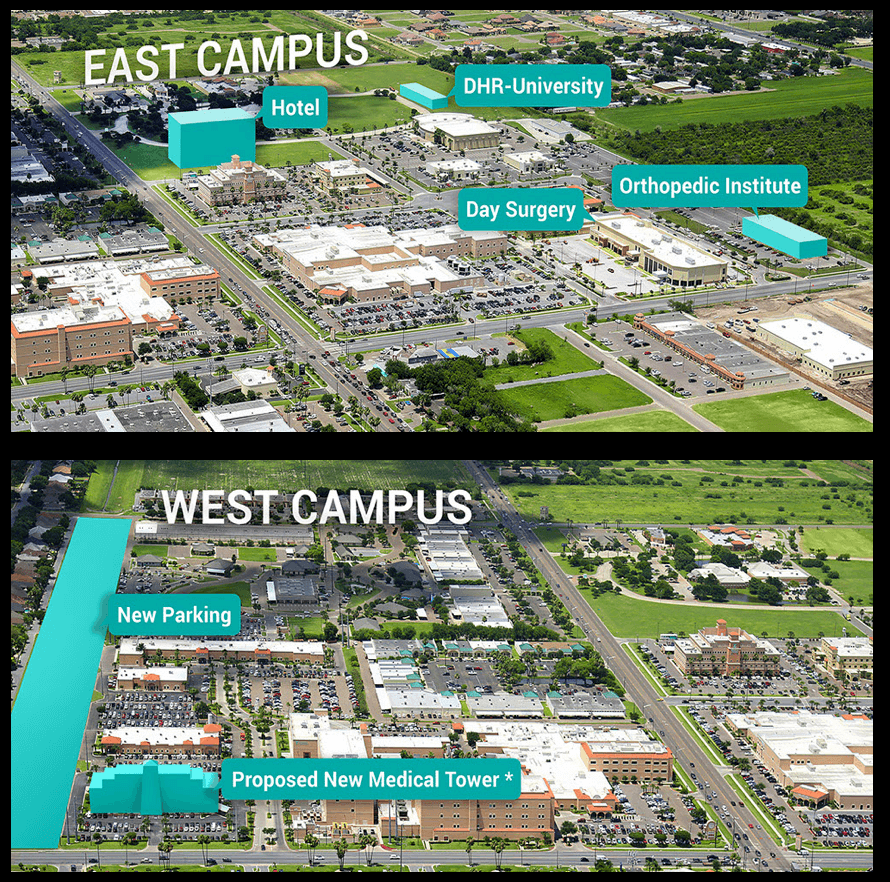 The medical industry is another major attraction in the region, Doctors Hospital At Renaissance has a 40-Acre Medical Development.

This medical development has been successful since the first day. Currently they operate with a 530-bed general acute care hospital. They offer over 70 specialties and sub-specialties with 650 practicing physicians, providing care to over 285,000 patients annually.

DHR operates one of the largest emergency rooms in Hidalgo County with 25 ER beds and 24/7 access to on-site physicians and on-call specialists.

DHR is home to the only exclusive Women’s Hospital in South Texas and a Level III-C Neonatal Intensive Care Unit that is ranked in the Top 5%, nationally and internationally, by the Vermont-Oxford Network for Exemplary Outcomes.

It is also the home to the highest nurse-to-patient ratio in South Texas. It is important to note that over the course of twelve months, they established and earned accreditation for four graduate medical education programs, which are: family medicine, general surgery, internal medicine, and obstetrics and gynecology – in collaboration with the University of Texas Rio Grande Valley. 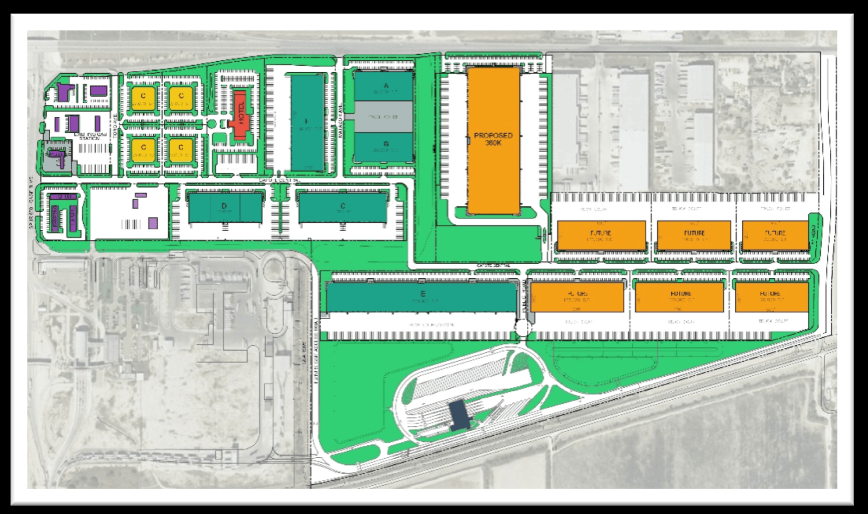 A 300-Acre Development located by the Pharr International Bridge. The Development is owned and operated by Capote Crossings L.L.C.

There are 800,000 SF of Class “A” Industrial buildings; the Industrial Development is completely leased at this time. The Development includes Commercial and Retail Space fronting U.S. Hwy 281.

This Development has been an attraction to top 100 Companies like Emerson, Black and Decker, Panalpina, among others. The Dyer Family worked with the City of Pharr in the sale of the land for the Construction of the Pharr International Bridge.  The new Border Safety Inspection Facility is located with the boundaries of this Development. 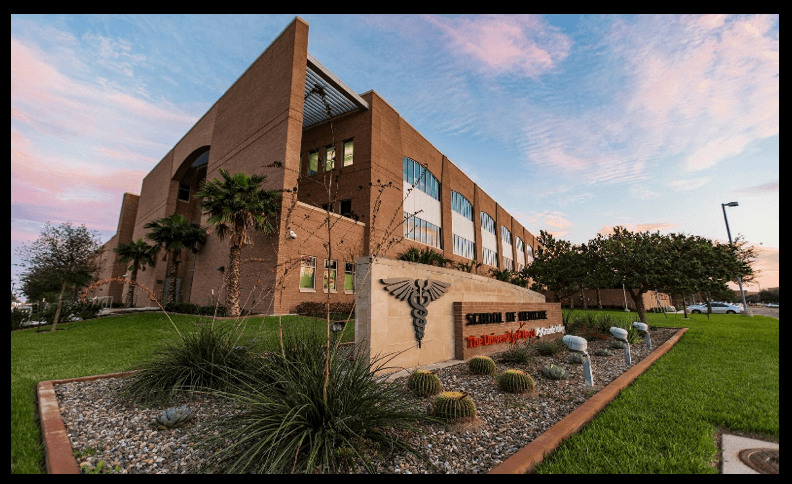 Yes, the School of Medicine started with 50 students in its inaugural class. UTRGV has partnered with DHR for Residency and Research Programs. Resident housing and multiple support facilities near partner hospitals were needed.

A 40-acre Development was proposed and built to deliver new needed Facilities for joint programs between DHR and UTRGV. A Public – Private Partnership agreement was executed to deliver the first of many Medical Research Facility. 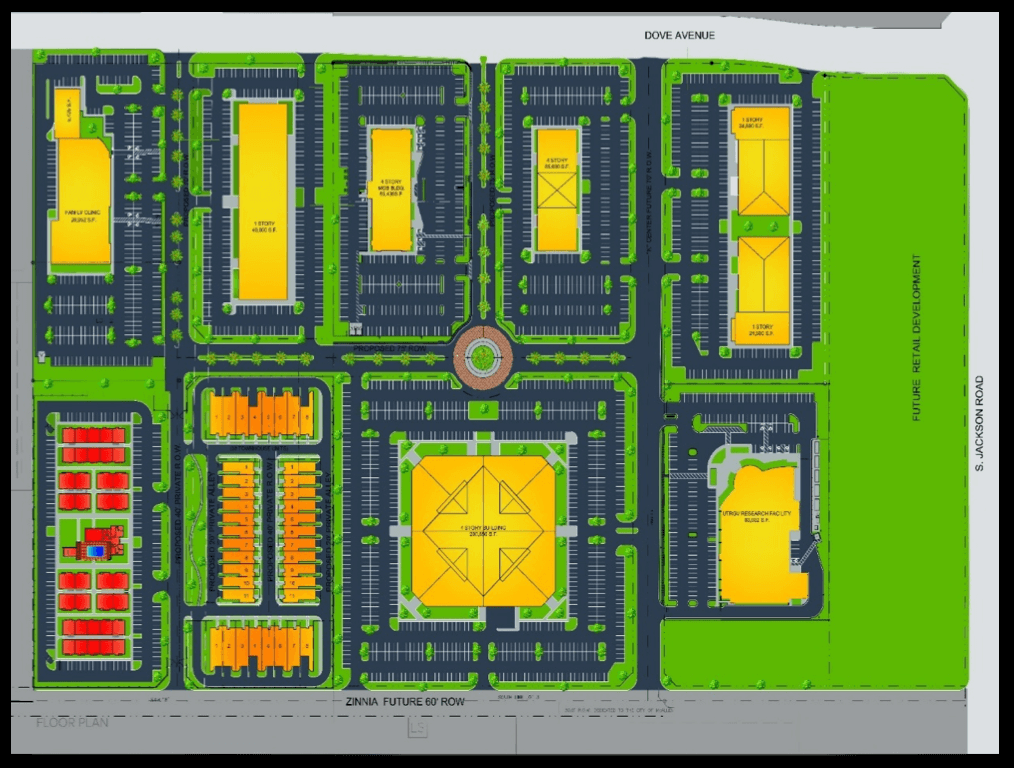 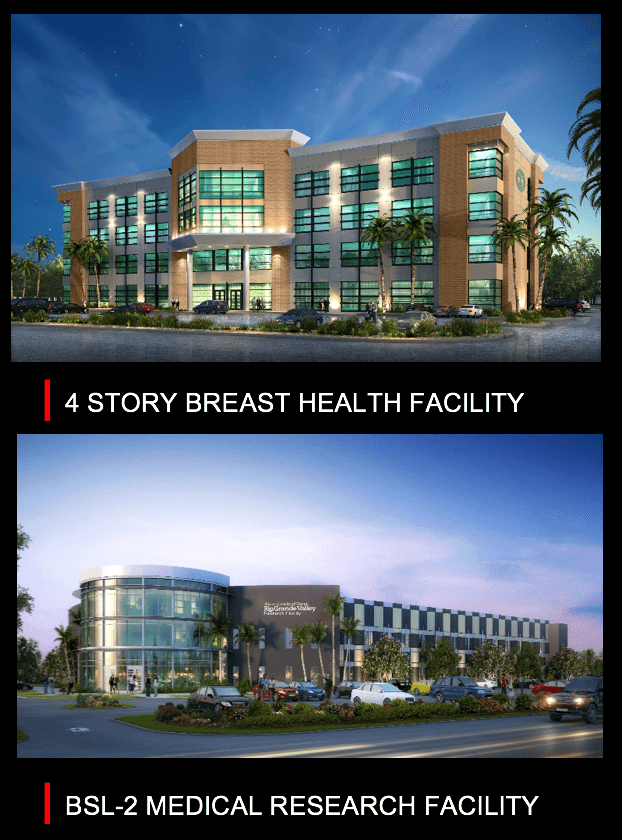 The Warren Group Architects Inc. is a company committed to excellence evidenced by the increasing number of repeat and referred customers seeking their service for all their planning needs.

Anyone who knows Laura Warren, easily identifies her dynamic spirit. She managed to establish an international reputation, recognized by satisfied clients and admired by colleagues in the industry. TBB

This post first appeared on Texas Border Business, please read the originial post: here
People also like
how to improve vision in 7 days
Karen S. Wiesner, Tension and Twists, Part 3 (Writer's Craft Article)
Wuzzuf’s Ameer Sherif Steps Down as CEO, Buckles Up for ITIDA
Afghanistan’s Pivot to Crypto: Will It Work?
Discover the Magic of Venice in November