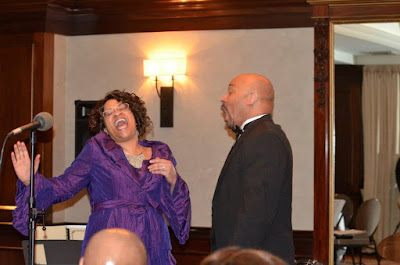 In the Old Testament the Levites is a family of priests and there are families of shepherds like Joseph and his brothers and there are families of fishermen like Andrew and Simon. In the Bible, occupations run in the family. That’s what I think about when I listen to Daryl Mims and his sister Ursula Mims Relaford sing. Music is a family vocation. In fact, Daryl and Ursula come from a musical family. When we were growing up, at Christmas the extended family would gather around the piano and it seemed like all of them (and they were a large family) could sing. Sure some played instruments like the piano, organ, guitar, drums and the clarinet. But the ten children in the generation that my mother grew up with and their children, including Daryl and Ursula, and now their children’s children were most often recognized as gifted vocalists.

As a small kid, Ursula was always singing. Perhaps she was emulating her mother, Annie Lois Mims. Mrs. Mims was my mother’s best friend. She and my mother were next door neighbors. When they became teenagers, they and several other women began singing together in the church choir. In those days, church lasted so long that they opened a restaurant in the adjoining building to keep folks from starving to death. They spent countless hours in church developing their skills. And Mrs. Mims became very skillful in the service of the Lord. When we were little, Mrs. Mims would line us up and teach us songs and I imagined that I could sing well. Ursula actually could.

Daryl would assign us parts, separating us into altos and sopranos, to sing “God Is”—Daryl serving as director. As a kid, he played several wind instruments and he could pick out things on the piano by ear. But he was a teenager before we ever heard him sing. I remember when it seemed like all of a sudden Daryl opened his mouth and sang for the first time. We were stunned. Someone said something like, “Boy you been holding that behind your teeth all this time?” He might have waited longer than his sister, but he’s been singing ever since.

We grew up as family. My father and Alonzo Mims served in the Navy together during Vietnam. My parents introduced Annie Lois to Alonzo, and the two couples eventually married. So it seemed natural for Daryl and Ursula to serenade my parents on the occasion of their fiftieth wedding anniversary. They sang Celine Dion and Andrea Bocelli’s “The Prayer.” Ursula’s devotion to the occasion was so great that she traveled by Greyhound from her home in Atlanta to meet her brother in Raleigh, NC. Then on the four and a half hour drive to the DMV, the siblings learned the song. They’re that good.