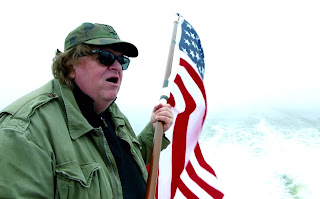 This is the canny Moore’s assessment of The Donald’s appeal to so many millions of American voters:

'Donald Trump came to the Detroit Economic Club and stood there in front of Ford Motor executives and said, "if you close these factories as you're planning to do in Detroit and build them in Mexico, I'm going to put a 35% tariff on those cars when you send them back and nobody's going to buy them."

It was an amazing thing to see. No politician, Republican or Democrat, had ever said anything like that to these executives, and it was music to the ears of people in Michigan and Ohio and Pennsylvania and Wisconsin -- the "Brexit" states.

You live here in Ohio, you know what I'm talking about. Whether Trump means it or not, is kind of irrelevant because he's saying the things to people who are hurting, and that's why every beaten-down, nameless, forgotten working stiff who used to be part of what was called the middle class loves Trump. He is the human molotov cocktail that they've been waiting for. The human hand grande that they can legally throw into the system that stole their lives from them.

And on November 8, Election Day, although they lost their jobs, although they've been foreclose on by the bank, and next came the divorce and now the wife and kids are gone, the car's been repoed, they haven't had a real vacation in years, they're stuck with the shitty Obamacare Bronze Plan where you can't even get a fucking percocet. They've essentially lost everything they had, except one thing -- the one thing that doesn't cost them a cent, and is guaranteed to them by the American constitution: the right to vote.

And there's more of the former middle class than there are in the millionaire class.

So on November 8, the dispossessed will walk into the voting booth, be handed a ballot, close the curtain, and take that lever or felt pen or touchscreen and put a big fucking X in the box by the name of the man who has threatened to upend and overturn the very system that has ruined their lives: Donald J. Trump.

Thank you media: the enemy of my enemy is who I'm voting for on November 8.

Yes, on November 8, you Joe Blow, Steve Blow, Bob Blow, Billy Blow, all the Blows get to go and blow up the whole goddamn system because it's your right. Trump's election is going to be the biggest fuck ever recorded in human history and it will feel good.

I think Moore’s analysis is spot on.