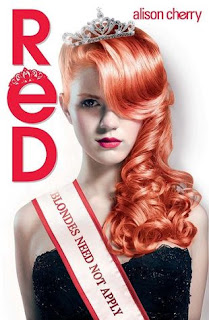 Felicity StJohn lives in Scarletville, a redhead sanctuary. But while it's a great place to be if you're a redhead, if you're not then life can get pretty tough. As the girl with the reddest hair in school, Felicity has it all; a popular boyfriend, great friends, and a shot at being Miss Scarlet, a highly coveted prize that only twelve girls from Felicity's year can participate in. Except that Felicity isn't a real redhead by Scarletville standards and has had her hair dyed to cover her true strawberry blonde colour ever since she was born...

I only just realised that Red was supposed to be a satire and that has made me feel a little silly. Going into it I kind of read it as across between a high school story and a slightly dystopian plot (because basically you're descriminated against if you're not a redhead) and honestly I do think that it works in that way. Probably better than it works as a satire.

There is the obvious theme throughout of being true to yourself and accepting who you are and what you look like, and these were done pretty well. I actually liked the fact that the ending was a little more realistic than some books would have it. *Slight spoiler alert in the next sentance* I was a little disappointed that Felicity didn't enter the pageant with her natural hair colour in the end, I was expecting something a little more Cady from Mean Girls from her.

I liked the budding romance between Felicity and Jonathan. As a non-redhead he did come across as a bit more real than several of the other characters and I felt that he and Felicity actually managed to build on more in common than some of the other characters. I'd go as far as saying that Jonathan is what saved Felicity from being a ridicolously shallow character. In contrast Felicity's jock boyfriend was incrediably annoying, and was basically a stereotype (which even she seemed to realise).

I will admit to still being a little confused about why Gabby was choosing to blackmail Felicity, especially as she said that it wasn't actually personal. Some of the things she got her to do didn't really seem to have the effect that she wanted them to. But at least it showed a character (albeit a brunette one) trying to rail against society.

I did enjoy Red, and I didn't ever feel like I should put it down, but I can't help but think that it could have been so much better!