Carmilla is a successfull vampire-lesbian Web Series that now is being developed as a feature-length movie. The release is scheduled for this fall.

“Carmilla the Movie” (working title) features the stars of the digital series, Elise Bauman and Natasha Negovanlis, who return for the supernatural spinoff film. (...)
Both the movie and the web series are based on the 19th-century cult-classic gothic vampire novella of the same name by Joseph Sheridan Le Fanu.
In “Carmilla the Movie,” it has been five years since Laura (Bauman) and Carmilla (Negovanlis) vanquished the apocalypse and Carmilla became a bonafide mortal human. They have settled in to a cozy apartment in downtown Toronto; Laura continues to hone her journalism skills while Carmilla adjusts to a non-vampire lifestyle. Their domestic bliss is suddenly ruptured when Carmilla begins to show signs of “re-vamping” – from a fondness for bloody treats to accidental biting – while Laura has started having bizarre, ghostly dreams. The couple must now enlist their old friends from Silas University to uncover the unknown supernatural threat and save humanity – including Carmilla’s. (Todd Spangler in Variety)

It seems that somehow, two Brontë sisters will be featured in the production: Cara Gee (Drummer in The Expanse) plays Emily Brontë and Grace Lynn Kung incarnates Charlotte Brontë. 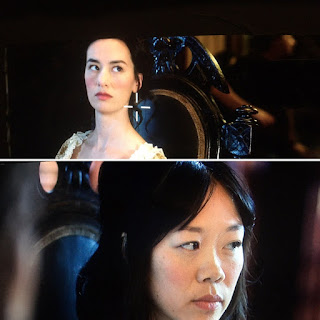