Cabin Fervor: a new short story about hunky Broadway dancers who escape to the woods 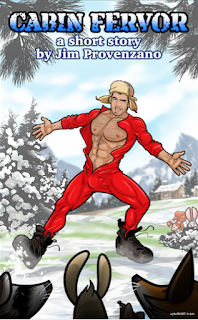 Wild animals in cities, Broadway Dancers, OnlyFans and the pandemic might seem like unlikely story ideas, together at least. But these four topics blended together in an inspired writing spell, so I cranked out a fun tale called "Cabin Fervor."

The Best Private Dining Rooms in New …
Badshah – Genda Phool | JacquelineFer…
What’s the Success Mantra in Business…
8 Places to Drink Coffee in KC that …
Keith Carter and the Cloud of Mercy, …

While there are some serious issues taking place now, some are able to see a hint of, yes, humor in it. The very cute cover art is by illustrator and author David Cantero.

First; the COVID-19 pandemic is not funny. The heinous mismanagement of the pandemic by the inept and corrupt previous administration is obvious. Yet somehow, people have been able to find hope and a bit of dark humor to get through it. And as in the story, I do have some old New York City pals who've decided to temporarily leave the city. Reuters reports that it's effected NYC's economy to more than a billion dollars in losses.

Second; wild animals roaming through cities. Long before the pandemic, I longed to write a story about what I wrongly termed "bioconvergence."

This PopSci article explores the phenomenon. Animal wildlife's habitats have long been decimated by human populations. What happens when they in turn, invade, or –more accurately– reclaim human spaces? Treehugger explores the days when animals roamed urban streets while humans huddled indoors.

"Animals are not dramatically rebounding in the absence of humans, but they are timidly pushing their boundaries, with sika deer showing up outside their normal habitat in the park in Nara, Japan, wild turkeys showing up in a park in Oakland, California, and orcas venturing farther up Vancouver's Burrell Inlet than they typically do."

So when a common occurrence we've seen in countless YouTube videos temporarily becomes a 12 Monkeys norm, we take notice. When a fiction idea becomes a greater reality, it's time to get writing.

But wait (third and fourth); what about Broadway dancers and OnlyFans? Let's just say that I may follow a few hunky Broadway male dancer-actor-singers on social media. Being trained exhibitionists, they're performed a few times in Broadway Bares fundraisers. But under lockdown, they miss work, of course, but also their inner exhibitionism's quite inhibited!

Let's also assume that I may have visited a few gay adult websites that revealed a few racy photos and videos of a few male performers who, facing a complete shutdown of their performing opportunities, chose to 'pivot' into personalized adult entertainment (NSFW!).  Some celebs are using it in less adult ways, too.

"I'm somebody who stresses about a lot of things," says David Pevsner in an interview with the Hollywood Reporter.

The actor who has appeared on Silicon Valley and Modern Family. Thanks in large part to OnlyFans, where he's been posting X-rated content for his subscribers since 2018, he says, "Right now money is not stressing me out."

Put them all together, and you've got an oddly funny, sometimes sad, very sexy, and very contemporary tale.

Enjoy "Cabin Fervor." You can get it on (the evil, but whaddaya gonna do?) Amazon.

Wear your mask, make your own entertainment, as I did, and stay safe.

What’s the Success Mantra in Business?

Keith Carter and the Cloud of Mercy, Part 1

Cabin Fervor: a new short story about hunky Broadway dancers who escape to the woods