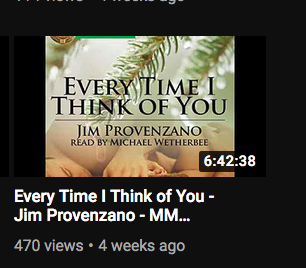 This is how I single-handedly shut down two thieving audiobook pirates on Youtube. Yes, thousands of illegally shared audiobooks are still on YouTube, converted to mp4s. If you're a fan of stolen property, piss off. If, however, you are an author, narrator, or a fan who respects artists, read on.

I've written about piracy before, of ebooks, back in 2013, after my fourth novel, Every Time I Think of You, had received a good amount of sales and publicity. It was also the time when I converted all four of my books published at the time, to ebooks for sale on various websites.

But I hadn't known, or forgotten, that hundreds, if not thousands, of audiobooks, converted to 'videos' with just the cover as a visual, are all over YouTube.

While looking up any posts about my seventh novel, Finding Tulsa, I checked for any mentions of the audiobook adaptations of Every Time I Think of You and its sequel, Message of Love, which I coproduced with talented voiceover actor Michael Wetherbee. Co-producing means we split the profits.

Imagine my surprise when I found a 'video' of Every Time... on YouTube! Wow, thanks. No, wait, it's not a review, but the complete seven-hour audiobook converted into a movie! WTF? 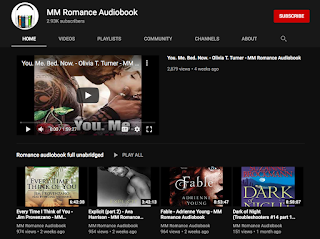 After saving link, making screencaps, and clearing the smoke blowing out of my ears, I reported it to YouTube. After only a few hours, it had been deleted. Then I found another copy on a different account with about 1500 other M/M (code word for 'gay' in the romance book world. Don't get started on that again). I reported that one, too, and noticed several others in the pirate's playlist/uploads had also been deleted. So at least a few other authors are aware of this problem.

Then I thought to contact a few other authors, but the list was too long. I posted a short account of the situation on a private writers' support Facebook group; no replies. Fine. You don't care, but I do.

So I went deep. I found contact emails for Amazon, Audible, ACX (the Audible program for creating audiobooks) and YouTube. Amazon's legal department replied within an hour. YouTube's autoreply was that they could only delete specific copyright claims from individuals.

Anyway, someone took this seriously, and the two YouTube accounts that had uploaded my audiobooks were completely deleted.

In the words of Joan Crawford, "Don't fuck with me, fellas. This isn't my first time at the rodeo."

Get my money back
So, why did I go to all this trouble? Because I spent years writing these books, and worked for months with my narrators to complete these projects. And in the two weeks the pirated version of Every Time... was on YouTube, I noticed a sharp drop in sales of that title. 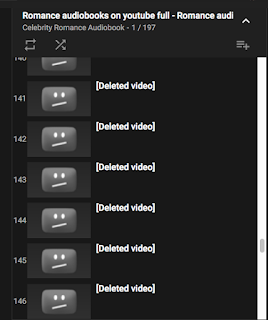 Further, if you count the 450 (one YouTube account) and 900 views on another, add about $5 to each view (our split royalty), that's $6,750. That is how much potential income we may have lost because of the scum that uploaded my one audiobook.

Consider the multiple other authors, most of whom sell ten times more than mine, and it could be in the hundred-thousands. While it's impossible to track down the actual users, suing the creeps is still a hope.

The inane argument for condoning piracy is that it's 'good publicity,' it's 'good exposure.' That's baloney. I do marketing, I'm quite 'exposed,' literary-ily speaking (not in a Chris Evans way!).

For Finding Tulsa, I got a discount entry to the pricey NetGalley, where readers can get free copies of ebook editions, in exchange for reviews on GoodReads and/or Amazon.com. I also took up a request from Erie Gay News to give away audiobook access to my paired romance novels, and ebooks of Finding Tulsa.

The result was underwhelming in terms of reviews. Not only did I not get a single Thank You email from the winners, but perhaps two reviews resulted from the contest so far. The NetGalley deal got me six reviews so far.

This is all part of experiments I toy with for every book I publish, by myself or with small presses. In times like these, it's nearly impossible to get press, and being a member of the press, I know. At my job as an arts editor, I get more press release emails than ever before, with artists and producers in all genres desperate for attention. Some of them are offering free shows, readings and talks online. Others charge admission, an option they should have. 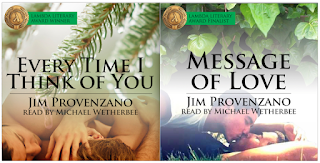 Writers who are indifferent to loss of sales from piracy must not be like most artists these days, who are unemployed or underemployed.

But even if an author has, perhaps, a partner to support them, or they're so darn successful they don't care about losing a few hundred or a few thousand dollars a year from piracy, they should show support for fellow authors and narrators by sending complaints to the corporations, who sometimes respond and act swiftly.

So, here's the deal. Buy the damn audiobooks. Buy the books in whichever format you prefer. Buy them through Bookshop.org, and then post your reviews on (evil) Amazon, Goodreads and Barnes & Noble.

If you're a fan, but money is tight, ask for promo codes for any or each of my three audiobooks and I'll send them to you. In exchange, please post a review on Audible and/or Amazon.com. That's only fair.