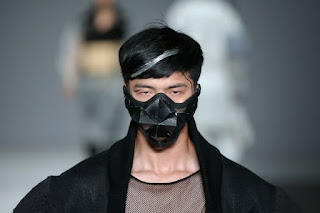 My son hits me up to tell me about a black smog in China. He don't really text me like that these days. His dad is another country not working for the U.S. Government or the military at the peak of his adolescence years. Yeah, he's a teenager, so the distance is to be expected. I guess even if it wasn't six thousand miles, in homes across the world,the space between kids and parents feels that big.

I am excited to hear from him on the random. Trumps's election challenges the American view of the environment, a dawn Americans know whatever we are, no matter how much blood we've spilled in the plains over our short history, we are not China. Really, I am like what is a black smog? Honestly, it sounds like something out of the all too popular Marvel craze. I ain't watch Luke Cage, but my Facebook feed said it was like that. A bulletproof hero to capture our minds at the perfect time, when we imagine more than ever we need to be bulletproof. Black smog sounds like a villain trying to wreak havoc on metropolis and extort funds from mofos. I figure he seen a T.V show or a news program that says China's air pollution has reached dramatic levels.

Maybe that's the reason for the random text.

I look out the window.

It's a beautiful ass day.

We are just after the solstice, so I guess it is winter. It's only gotten really cold here once; but it rains a lot, which makes the cold colder. It can be dreary here. Your shoes get wet walking the streets and when it rains, the dull background of pollution in the air seems to mask everything even more.

But today is a beautiful day. I'd say maybe fifty degrees, and the sun is pretty bright. The dullness today I give to the heart of winter. Who knows, maybe I am wrong.

But I sure as hell don't see no black smog.

First time I came in 2010, as we flew into Bejing I saw a strange haze fill the air. It wasn't black though, more an orange, but I didn't spend no real time in Beijing, so can't really say I know how bad it is. Though I do know there are upwards of twenty million folks in that city, which fascinates and scares me at the same time. I've seen some dusty looking streets with pictures of folks wearing what look like medical masks. I've seen that too here in Wuhan, but not so much.

My man here takes me to climb a mountain near this spot called Moshan Park near East Lake on the edge of Wuhan. It's not really a mountain, but big enough to give us a majestic view of the city's surroundings here. We reach the top. As we climb, we don't really breathe too hard and it only takes about thirty minutes. All walking, no real climb. When we get to the top, you can see water for about two hundred and seventy degrees around the hill, and though the hills are developed, the park maintains the scenic view. I could be wrong, but the scenic view seems to be a Chinese thing. Again, the first time I was here, I visited a city people recommended for its Amusement Park. I was thinking King's Dominion or Six Flags, but when I got there I found lakes with temples constructed at odd angles of sight surrounded by lotus ponds. Apparently, amusement was a pastime of the Emperor. I guess that is what was done before iPods and gadgets. As I traveled the park then, I imagined an emperor with me, riding on his boat gazing and contemplating. I felt both a strange privilege and democracy at the same time. Though things were refined, it was as much nature as human's shaping and trimming.

Moshan Hill is the same way. The privilege comes from the height. When you look out and see Wuhan, you imagine you possess something the hill itself gives.

But the day I went to the hill there was a strange haze that seemed to cover everything. The city appeared to be slightly out of focus even though the sky seemed clear, and the sun had a second ring around it and appeared dim. Obviously things weren't clear. The air is supposed to be invisible, but had added weight. Far off in the distance on one side you could see smoke bellowing from giant tubes--stacks of factories rising into the sky.

Wuhan is in the gut of China with at least ten million people. It is full of construction, and reminds me of the last decade or so of D.C. as it gentrified itself and changed right before my eyes. But D.C. is what they would call a small town in China. In the same way America's population is small for all the land it has. The explanation is colonialism, and the perspective becomes clearer in relationship to China. Imagine the way heat, plastic, and industrial functions would tax America if the population was five times the size? The Chinese environment problem is a people problem. Who knows what Africa would be without colonialism in terms of population? Go back and read How Europe Underdeveloped Africa by Walter Rodney.

The American mind, in spite of the death of the buffalo at our hands, can imagine it treats the environment in ways the Chinese do not, but it seems to me, America is something Europe has gnawed on since the invasion that established the country. Think about what Native Americans would say if they commented on the treatment of the environment since the arrival of the settlers.

People wear the mask here in China. My statement is literal. I was at a hip hop night, and a dude came in with his mask on, and I almost took it as a fashion statement. Shit looked sort of cool, cuz he had a high end one on, not the usual disposable medical room kind.

It made me think of dudes in Raphael Edmonds's D.C. who used to be on goretex jackets made for subpolar weather. There is a place where fashion in America is as impractical as having enough pairs of shoes to wear one everyday out of the year and never really wearing them all. Big ass houses that eat up enough heat to pay some poor person's rent or mortgage. American colonialism and manifest destiny is about space and conquest. Big ass Texas shit. I am not sure the Chinese have such luxuries. They may drive towards what we have but it is hard to eat so many natural resources like America does.

But some of that stuff that makes smoke I am sure is being shipped to America. It may surprise some that in my limited time here, it seems to be a common topic and concern. The masks says that. It is undeniable. I am working at a university, and during a speech contest, one of the topics discussed was environmental concerns.

They seem to be on it, too; there are just so many people. Recently, as we talked about migration, someone shared that over six hundred million Chinese people will move to the cities in the next few decades. The number could be true given the population of at least 1.3 billion. It is less than half, but also almost twice the size of America. For city planners, energy workers and country administration the problem must feel overwhelming at times. America literally can't have that problem. Education is literally a two child rule for much of the middle class, and the population is dramatically smaller. Indeed, we can afford more space and more waste.

Our consumerism is profound waste masked by the seizure of a land mass as large as China itself. When people wear the mask here in Wuhan, Beijing, or one of the many cities big as New York, it is practical. China is simply a different country.


This post first appeared on Free Black Space, please read the originial post: here
People also like
The Mysterious and Majestic Atacama Desert: A Guide to Visiting this Unforgettable Place
Vigilante: The spiritual successor to Kung-Fu Master
What would happen to a modern-day Moses in America?
Newchic – Up to 20% off Men’s Spring-Summer Fashion
Crime Tourism: Bringing Burglary Crews From South America To Affluent California Communities
List of 10 Fastest-Growing Stocks under $5 Dollars 2022