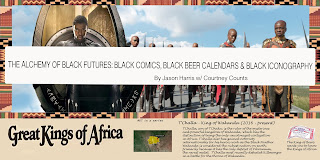 THE ALCHEMY OF BLACK FUTURES: BLACK COMICS, BLACK BEER CALENDARS & BLACK ICONOGRAPHY
As the information age gives way to the age of reckoning, where the dictates of nature will take precedence over the ‘needs’ of the market (and the pockets that control it), finding the spark of innovation in popular culture seems anachronistic. Yet, given how popular media is one of the primary vehicles for acculturation in the west, an event such as the release of Marvel’s ‘Black Panther’ Film provides an opportunity for paradigm shifts that extend beyond casting in Hollywood. ‘Black Panther’ gives us a cinematic take on a Black Utopia, and in doing so, allows us to cast reflection on mechanisms and hierarchies with which the Black diaspora is currently struggling. In light of this moment in which we are struggling to find answers to a gaggle of issues that threaten humanity, could there not be a better time to fantasize about a place that has it figured out?