Intelleftualism and Brief Meditation on the Typo 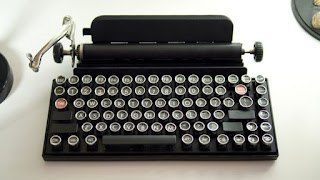 Brief Meditation on the Typo


Is a typo like a tomato stain on a white shirt?  Maybe ring around the collar?

Without a doubt it is blemish.   What does a blemish indicate?

Is it scar or fresh wound?

My mother taught business administration for years; and I have to thank her for learning how to type as youngster.  There were four bedrooms in our house.  She had one. I had one.  My sister had one.  In the tiny hallway between our rooms and hers there was a third bedroom where the typewriter  sat.

There was rather large window there that mostly faced our neighbors house, but also caught slivers of the street.  I would meditate (though I didn't have the word for it then) often in that room, and read the World Book Encyclopedias which were shelved there.

It was there in the upstairs study of sorts that my mother  demanded that we learn how to type at a very young age.  IN many ways she is a master teacher with the right combination of discipline and hover over you to make sure you get it right.  In those days, typing was a more select skill.  The world then was not full of keyboards.  Typing was vocational; still she insisted though she sent us to the private schools where we would get the other, and I guess more important, fundamentals of an education.  We must have been nine or ten when she gave us some incentive to begin going through the books, which always had a binding on the top and were like large tablets.

There was talk of reach.  Words Per Minute.

One day I say an African American on T.V. who was touted to be the fastest typist in the world.  I can't remember how many words per minute it was; but it seemed like it was more than a hundred.

Nevertheless, the typo has become a different thing now.  Now we simply use delete or backspace.  In the old days it was correction tape.

When I went off to college at the New School for Social Research knowing among other things that I wanted to write, I had a heavy weight Toshiba laptop, one of the first generations and a portable typewriter.  Both machines would make today's consumers shirk.  It was less than thirty years ago.  In retrospect the idea of a portable typewriter is almost crazy.

When my mother came to live with me, she would still type some forms of correspondence on an old IBM wheelwriter, that operated almost like a laptop.  She would often save documents in it, and it could record the keystrokes and reproduce.

I guess the last thing about a typo and what I forgot about delete and backspace is the way in which an error gives rise to some thing you would not have consciously done.  It is a sort of exploration.  My how things have changed.  Auto-correct on one level makes a typo much more negligent.  Yet, in the days of the typists they provided a service that helped eliminate errors for those they worked for.  Now we all are the typists.  It seems to be one of the first casualties of the new technology.  Typing is no longer really a skill, but at the least a necessity.  Everybody has to be able to do a little bit of it.

Auto-correct is swallowing up the universe's anomolies and our journey into the unknown via new and unique words.


So I am typing on my keyboard and hit the wrong stroke.  I got to type intellectualism but accidentally hit the f key instead of the t. It seems like someone else must have made this error before.  The keys are right next to each other (actually diagonally adjacent.)

I look at the word and then think this is saying something that I've thought about lately.  Especially in regards to the lost election and the Trump rise.  I've said something that could be labeled intelleftualism many times here on Free Black Space, but was struggling to articulate the idea.

But there it is.   Intelleftualism.

Intelleftualism:  intellectual discourse on the left that suggests scholarship, rigor, craft, objectivity, and transcendence, but in reality operates within the limited bandwidth of the ideas already endorsed, proved, and already deemed to be correct by the left.

Intelleftualism and Brief Meditation on the Typo