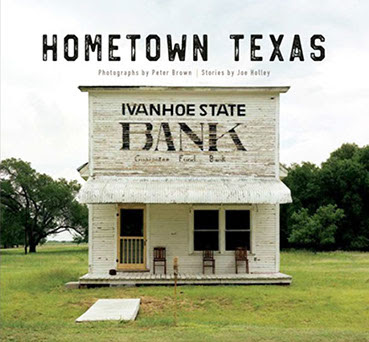 I reviewed Hometown Texas (Maverick Books) by Joe Holley and Peter Brown for Lone Star Literary Life. This is a handsome volume of essays and photography exploring Texas's small towns. “There is much to be seen, heard, and appreciated in these little towns,” Brown writes, “there are creative and energetic people working with good ideas that they apply locally, and their stories are worth passing on and celebrating.” Indeed.

The datelines are Mobeetie and the Boquillas Crossing, Cotulla and Paducah, Comfort and Aurora (the Roswell of Texas), Bigfoot (named for Bigfoot Wallace) and Indianola, Canton and Hawkins. The subjects are as disparate as Temple Lea Houston, Italian prisoners of World War II, water witches, and aliens. There is cowboy poetry in Alpine, Chataqua in Waxahachie, the Sanctified Sisters of Belton (a commune whose book collection became the Belton Public Library), the world’s only beauty salon/bookstore (Beauty and the Book), man-heads buried in Malakoff, Port Arthur trying to talk Hollywood into blowing up its downtown, and that time the Marx brothers were arrested for playing cards on Sunday in Nacogdoches.

Hometown Texas is a handsome new volume of essays and photography from Trinity University Press’s Maverick Books. The essays are reproduced from the Houston Chronicle’s “Native Texan” column written by Pulitzer Prize finalist Joe Holley, an author, a former editor, a former staff writer for the Washington Post and a regular contributor to Texas Monthly and the Columbia Journalism Review, among other outlets. The photography is courtesy of Peter Brown, an award-winning photographer who teaches at the Glasscock School at Rice University, whose work has been collected by the Menil Collection, MoMA New York, and the Getty Museum, among others.

The Texas Holley wants us to appreciate is “rural, small-town, and slower-paced … intimately connected to [our] frontier heritage … beyond the metropolitan areas spreading amoeba-like into the surrounding countryside.” Three things draw Holley to these places: “intriguing people, the pervasive influence of place, and the enduring significance of the past on present-day lives.” Holley knows that “towns, like people, are intelligible. They have distinctive personalities.” Muleshoe is not like Valentine, which is not like Llano, which is not like Smithville, which is not like Gladewater.

Brown states in his introduction that he didn’t try to summarize the whole of Texas in a documentary style, but rather uses “lyric documentary style,” defined by Brown as “descriptive and personal, more fictional or poetic than photojournalistic.” Hometown Texas is divided into five geographical regions: West, North, Central, South, and East Texas. Brown provides an “impressionistic” set of photographs, basically his artistic responses to each of these five regions.

Hometown Texas brings home the daily relevance of history, and the truism that truth is stranger than fiction. I’d use this book as a travel guide, and a primer on how small towns survive, thrive, or don’t. “There is much to be seen, heard, and appreciated in these little towns,” Brown writes, “there are creative and energetic people working with good ideas that they apply locally, and that their stories are worth passing on and celebrating.” Indeed.