Historically, Native people have been silenced and their stories set aside, hidden, or drowned out. The #NoDAPL movement and the fight against racist portrayals for sports mascots  brought Native American voices to the forefront of the news last year, but the issues that the community still have to deal with shouldn’t be brushed aside. This is why it’s especially important to continue to read stories about Native characters, by Native voices which brings us to some exciting news: last month, we brought back to print a special 40th Anniversary  edition of Simon J. Ortiz’s beloved children’s book The People Shall Continue, which traces the history of Native and Indigenous people in North America. It includes updated illustrations by Sharol Graves and a new afterword by the author. It’s also available in a Spanish translation which you can purchase here. 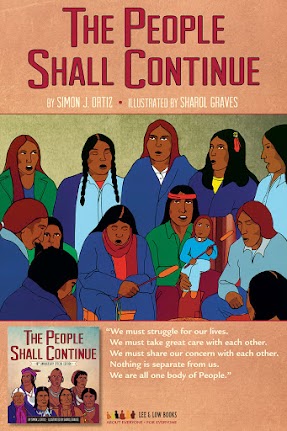 Also check out the book trailer below:

Filling in More of the Story: Modern-Day Narratives of Native Americans

The Miseducation of Native American Students

Classroom lessons from the National Museum of the American Indian