Review: The Burning by Laura Bates 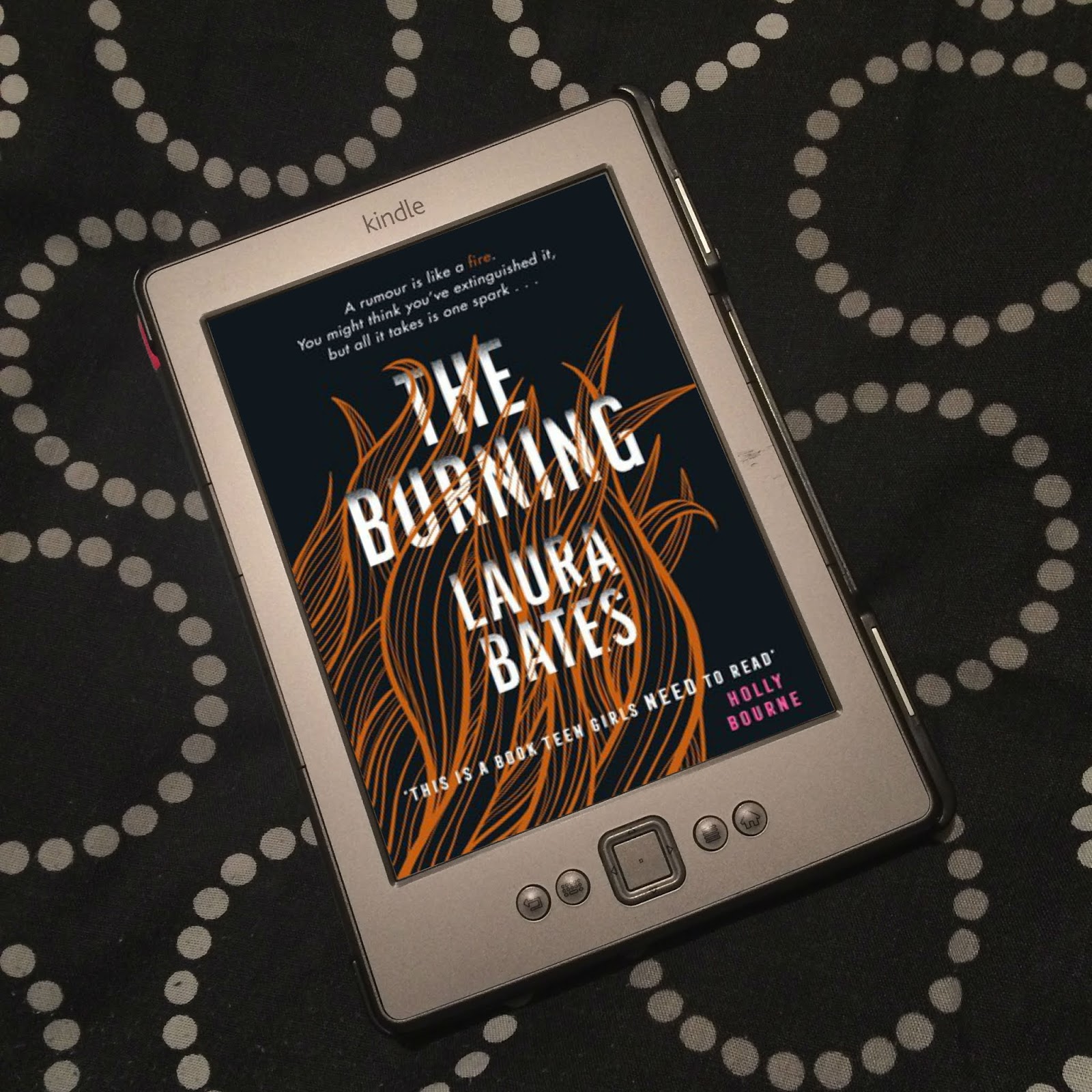 The Burning by Laura Bates

Fire is like a rumour. You might think you’ve extinguished it but one creeping, red tendril, one single wisp of smoke is enough to let it leap back into life again. Especially if someone is watching, waiting to fan the flames ...

There’s nothing to trace Anna back to her old life. Nothing to link her to the ‘incident’.

At least that’s what she thinks … until the whispers start up again. As time begins to run out on her secrets, Anna finds herself irresistibly drawn to the tale of Maggie, a local girl accused of witchcraft centuries earlier. A girl whose story has terrifying parallels to Anna’s own…

The compelling YA debut from Laura Bates, founder of the Everyday Sexism Project and bestselling author of Girl Up. From Goodreads.

I received this eProof for free from Simon & Schuster Children's Books via NetGalley for the purposes of providing an honest review.
Trigger Warnings: This book features rape, non-consensual  pornography, sex shaming, victim blaming, bullying, discussion of abuse due to abortion, and discussion of death from cancer.

When I first heard Laura Bates was writing a YA novel, I was so excited to read it. I loved her feminist non-fiction books, Everyday Sexism and Girl Up, and I was sure The Burning was going to be incredible, too! Unfortunately, it left me a little disappointed.

When Anna moves from Birmingham to St. Monans in Scotland, she hopes it will be a fresh start. She's left her past behind, and is ready to begin anew. She's just starting to settle, to find her feet, and has made some good friends, when her past finds her, and everyone knows what she ran from. As she struggles with the abuse and bullying, and the sudden loss of her friends, her history project keeps her going. She must research the life of a local person, and has discovered that in the 17th Century, a teenage girl, Maggie, was executed as a witch. The more she discovers, the more she finds she relates to the girl whose whole town turns on her because of something someone else did - and that the world is not so different now as it was then, with girls getting blamed for what boys do to them.

I really, really wanted to love this story, but there were a number of things that just left me wanting more, sadly. From Bates' Author Note, we know that the things that happen to Anna are based on the experiences of girls and young women she has been told about when she's visited schools. In that regard, The Burning is a really important story. What Anna goes through is horrific, and it's harrowing to read. Imagining that happening to real girls and young women, today, in schools across the country, is really difficult to swallow. The Burning is going to be a great conversation starter, a way for people to face the truth of what's happening, but also how others, those in authority, react and try to deal with things. What happens in this book probably isn't going to be much of a surprise to those in schools. They will recognise this story. They probably know someone who experienced some of what Anna does, or have themselves. With The Burning, they will feel seen and understood, and that they are not alone, and the powerful effect of that can't be understated.

Because of the previous books Bates has written, I'm pretty sure her adult readers and supporters will pick this up, too, and in that case, I think it will have a massive impact. London Live tweeted a brilliant video interview with Laura Bates, and in it she discusses how teens today have parents who didn't have the pressures or the consequences that came with social media, and how there is a divide between what they experienced and what their children are now experiencing, and how she hopes The Burning will help to close that gap, to help them understand. And this is another reason this book is going to be so important, and so powerful.

But as a story, I did find it kind of lacking in areas. Once Anna's past has caught up with her and everyone at school knows about it, it's awful. The bullying and abuse she suffers is, as I've said, horrific. I really felt for her in her fear, her shame, her desperate desire to escape, to hide. But from that point on, that's pretty much all that happens to her; she is bullied and abused, and she hides it from her mum and from the teachers, and so nothing happens. It escalates at times, but otherwise, there's no change. And while it's awful, the story kind of plateaus there. So you're just reading more of the same for most of the book. I was expecting a book that would be of a girl fighting against sexism, because of Bates' previous books, and while I understand why she wrote this book, and the impact it will have, I wish there was some kind of change.

So I was more interested in the story of Maggie. Researching Maggie's life is the only thing that's different in Anna's story. I was really interested in the excerpts Anna read from non-fic books on witch hunts and trials, and the punishments for women who didn't behave the way men expected. So much so, I've started looking up non-fic on witch hunts / trials through a feminist lens, or their links to sexism. But there wasn't a huge deal of that research in the end. It was more a combination of conversations with an old local historian, Glenn, who is helping her, and him telling her what he's discovered, and then the dreams Anna experiences after finding a necklace hidden in her attic; she starts to dream of Maggie's life, and what she experienced. I was much more interested in the actual research than the conversations and the dreams. I was hoping Glenn would actually show her what he had found, rather than just tell her, and with the dreams, they were only snap shots of Maggie's life leading up to her death, and while what happened to her was disgusting and horrific, there wasn't enough of her to become as invested as I would have liked. I feel I would have been more invested if there were more excerpts about her life than dream visions. I also felt her story in those dream visions ended quite abruptly. I knew what was coming, but I expected more from that last dream vision, and it fell a little flat for me.

And then there's the fact that we don't really know much about any of the characters. Anna likes to swim, and was on her swim team at her previous school. Cat, one of Anna's new friends, is really into photography, and wants to be a photography. Alisha is super smart, hard working, and always gets top grades. Robin is a carer for his disabled mum. That's as much as we find out about them. No other hobbies or interests to fully flesh them out. I mean, they do have distinctive personalities and voices, but I can't tell you much about who they are, because we're not told.

I wasn't so keen on the ending, either, unfortunately. It's more that I didn't find the reaction to what Anna does quite believable, I just don't think it would have happened like that. Maybe it's end the story on a hopeful note, but I had various question marks over it - would Anna have actually have done that? Would she have said what she said? - and it just felt a little unrealistic? But maybe that's just me.

So yeah, I was pretty disappointed with The Burning. But a lot of other people have really enjoyed it, so do read some other reviews before deciding whether or not to read it.

benefits of dark chocolate
What to wear: outfit ideas for Christ…
Online Massage Therapy Courses, are y…
Karen Wiesner: I Have Dreamed a Littl…
Barracuda beach Lagos: Fun things to …
--
If you enjoyed this review,
please consider buying the book using my affiliate links, and following / supporting me:
Bloglovin' | Twitter | Goodreads | Ko-Fi

Review: The Burning by Laura Bates