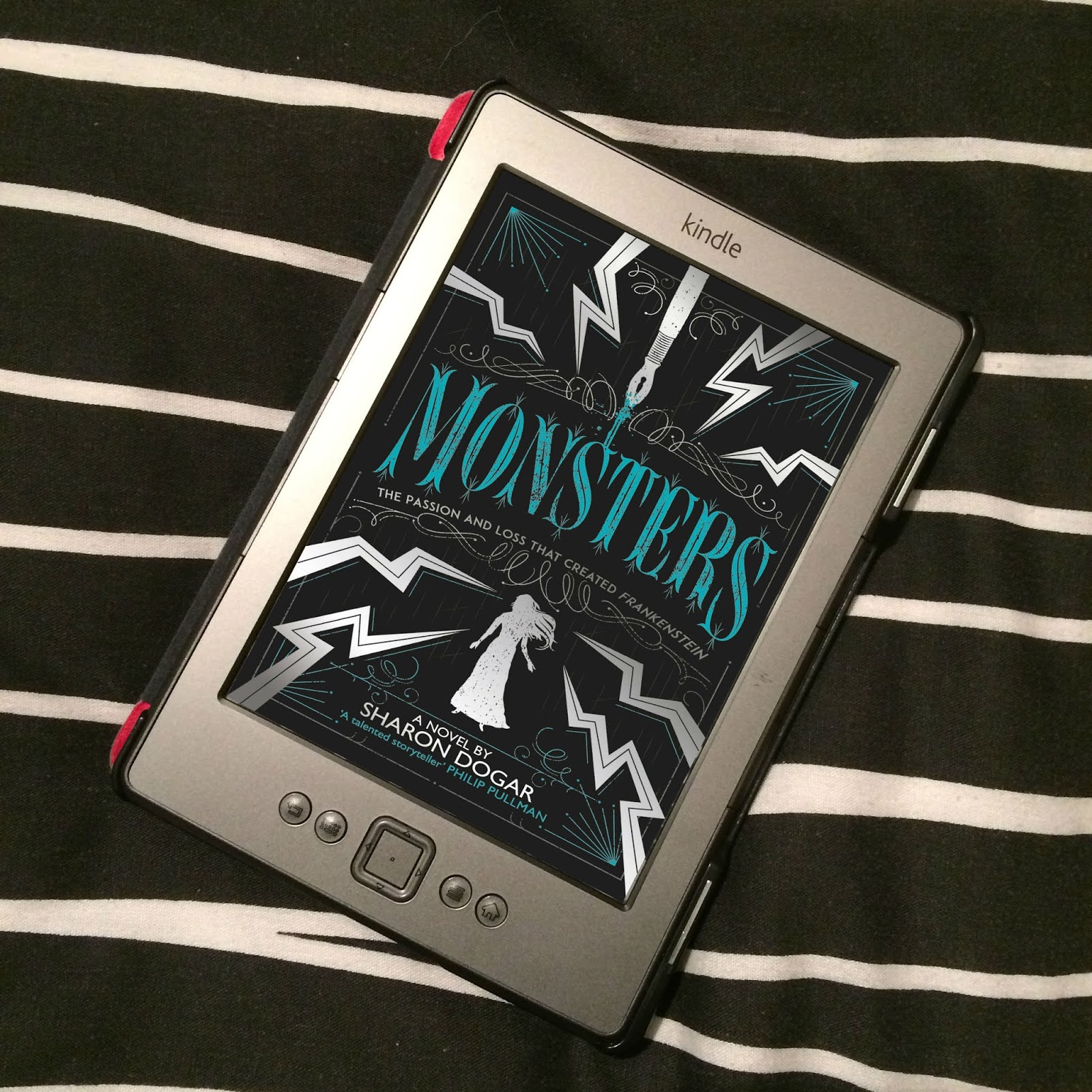 1814: Mary Godwin, the sixteen-year-old daughter of radical socialist and feminist writers, runs away with a dangerously charming young poet - Percy Bysshe Shelley. From there, the two young lovers travel a Europe in the throes of revolutionary change, through high and low society, tragedy and passion, where they will be drawn into the orbit of the mad and bad Lord Byron.
But Mary and Percy are not alone: they bring Jane, Mary's young step-sister. And she knows the biggest secrets of them all . . .

Told from Mary and Jane's perspectives, Monsters is a novel about radical ideas, rule-breaking love, dangerous Romantics, and the creation of the greatest Gothic novel of them all: Frankenstein From Goodreads.

I received this eProof for free from Andersen Press via NetGalley for the puposes of providing an honest review.
Trigger Warning: This book features infant death and suicide.

I was a little nervous going in to read Monster by Sharon Dogar. While it's a retelling of Mary Shelley's life, I was super excited, but as a historical novel, I was wary. I'm not generally a fan of historical, I tend not to enjoy it. But I shouldn't have worried; Monsters is absolutely incredible!

I originally thought that Monsters was going to focus on Mary's writing of Frankenstein, and while we do see her write it, it's not the focus. Monsters is the story of Mary, and her step-sister Jane - who later changed her name to Claire, which I will call her from now on - when they eloped with the poet Percy Bysshe Shelley in 1814, and what follows. It's a story of love and passion, but also one of rejection, hardship and heartbreak.

Shelley has big, radical ideas. He is an atheist, anti-marriage, and believes in free love - not the free love I immediately thought of, the 70s version that meant having sex with whoever you like, but free love; being free to love more than one person. Basically, Shelley is polyamorous. When Mary and her sisters meet Shelley, introduced to him by her father, they all become enamoured by this beautiful man with big ideas that lend to equality for women. Mary's father, William Godwin, was a radical philosopher, and her mother, Mary Wollstonecraft, was a radical feminist who didn't believe in marriage. Her father brought Mary up with his and her mother's teachings and ideas, so when she meets Shelley, she's not too far off his own thinking. The two fall madly in love, but despite his teachings, Godwin is completely against their relationship, and so, with the aid of Claire, they elope to France.

And what follows is a story that is full of suffering as it is love. The idea of eloping, and building a community of people with the same principles of free love is romanticised in their heads, but for Mary, the reality is quite different. Shelley is still married to his first wife, Harriet, and so, not only is she rejected by her father, they are ostracised by society. There are very few people who will help and support them. Money is always tight. They flit from place to place, leaving without paying rent, avoiding bailiffs, and, at one point, literally starve to a dangerous point. When Mary becomes pregnant, she realises that what Harriet warned her about - how he loses interest once you're pregnant and looks elsewhere - might be coming true. He's spending more and more time alone with Claire, while practically forcing her to spend time alone with his good friend Hogg, who is in love with her. The idea of free love is one thing, but seeing her sister mosey in on her man is difficult for her to deal with.

Claire, on the other hand, has no problem with free love. She loves Shelley, too, and is quite happy to share him, and has no problem doing so. Apart from the jealousy she feels - that she's felt her entire life - because she and her older step-sister Fanny are always ignored when Mary is around, which was the case when Shelley met Mary days after meeting the other two, and then proceeding to practically forget they existed, Claire really doesn't mind sharing Shelley. She does know, however, that Mary is struggling, and though she justifies her actions by thinking that this is what they signed up for when we eloped, and she isn't doing anything wrong, she knows how it would hurt Mary when she finds out.

I don't want to talk too much more about what happens, because it's best discovered as you read, but it's such a heartbreaking but beautiful story. It's told in present tense, with a third person omnipresent narrator, which flits from character to character, but it's mostly from the perspective of Mary and Claire. It's such a feminist story, and I couldn't help but admire these people who felt so strongly about their principles that they would live how they choose and just deal with the hardship is brought. You'd think the ideas and principles that Mary and Shelley have might possibly be a bit heavy and difficult to understand, but Dogar has written their story in such an accessible way, it's easy to follow. And to be honest, some of the stigma they faced isn't too different from what we see today. Sex shaming is sex shaming, no matter what time in history.

But I have to say, I wasn't really a fan of Shelley. No small amount of the narration is from his perspective, so while I understood where he was coming from, I found him to be, at times, quite selfish and uncompassionate, inconsiderate and unthinking. He is genuinely polyamorous, he loves both Mary and Claire, but he doesn't really see why Mary would have a problem, and doesn't deal with it. Yet he's also not that great to Claire, he says he'll support and look after her, but when Mary puts her foot down, he isn't so good to her. He is also impulsive and thoughtless, and a lot of the hardship they face is down to him and his lack of care with money. But I was also really mad at Godwin. He brought Mary up with her mother's teachings, her principles, and yet when she acts on them, he cuts her out of his life completely. She is allowed to live a radical life, but only in the ways he deems acceptable. There is so much talk about women being free to choose the lifes they lead, to be free to love, free from marriage, and so on, yet both Shelley and Godwin are only really happy for women to lives their lives in how they see fit. Mary should embrace free love, allow Shelley to love who he does, and for her to love others, especially Hogg. Mary should come home, have nothing to do with Shelley, and marry an appropriate man. She has more freedom with Shelley, but when does she actually get to make choices for herself? The book is called Monsters, and while almost everyone in this book has their monstrous moments - including Mary, at times she is unbelievably cruel - for me, the men are the monsters for trying to bend the women to their vision.

I've barely scratched the surface with Monsters, but I am telling you, this book is absolutely incredible! Despite it's hardship and suffering, I loved it, and I found Mary Shelley to be quite inspiring. She fights for the freedom to make her own choices, and live her life as she sees fit. And at such a young age! In a world that is disgusted by her. She's remarkable and wonderful, and I'm pretty in awe of her. It's still pretty early into the year, but I'll say it right now: Monsters is a strong contender for one of my favourite books of the year.

Thank you to Andersen Press via NetGalley for the eProof.

types of schizophrenia - negative sym…
30,000 Miles: Our USA Travels With Th…
What to wear: outfit ideas for Christ…
Karen Wiesner: I Have Dreamed a Littl…
Dacryphilia: The things you need to k…
--
If you enjoyed this post, feel free to follow me on:
Bloglovin' | Twitter | Goodreads


This post first appeared on Once Upon A Bookcase, please read the originial post: here
People also like
types of schizophrenia - negative symptoms of schizophrenia
30,000 Miles: Our USA Travels With The Napier Truck Tent
What to wear: outfit ideas for Christmas & summer
Karen Wiesner: I Have Dreamed a Little Dream (Authors and Dream Inspiration), Part 2
Dacryphilia: The things you need to know right now
Review: ‘Trouble’ Scott Van Zen
Discover the Magic of Venice in November