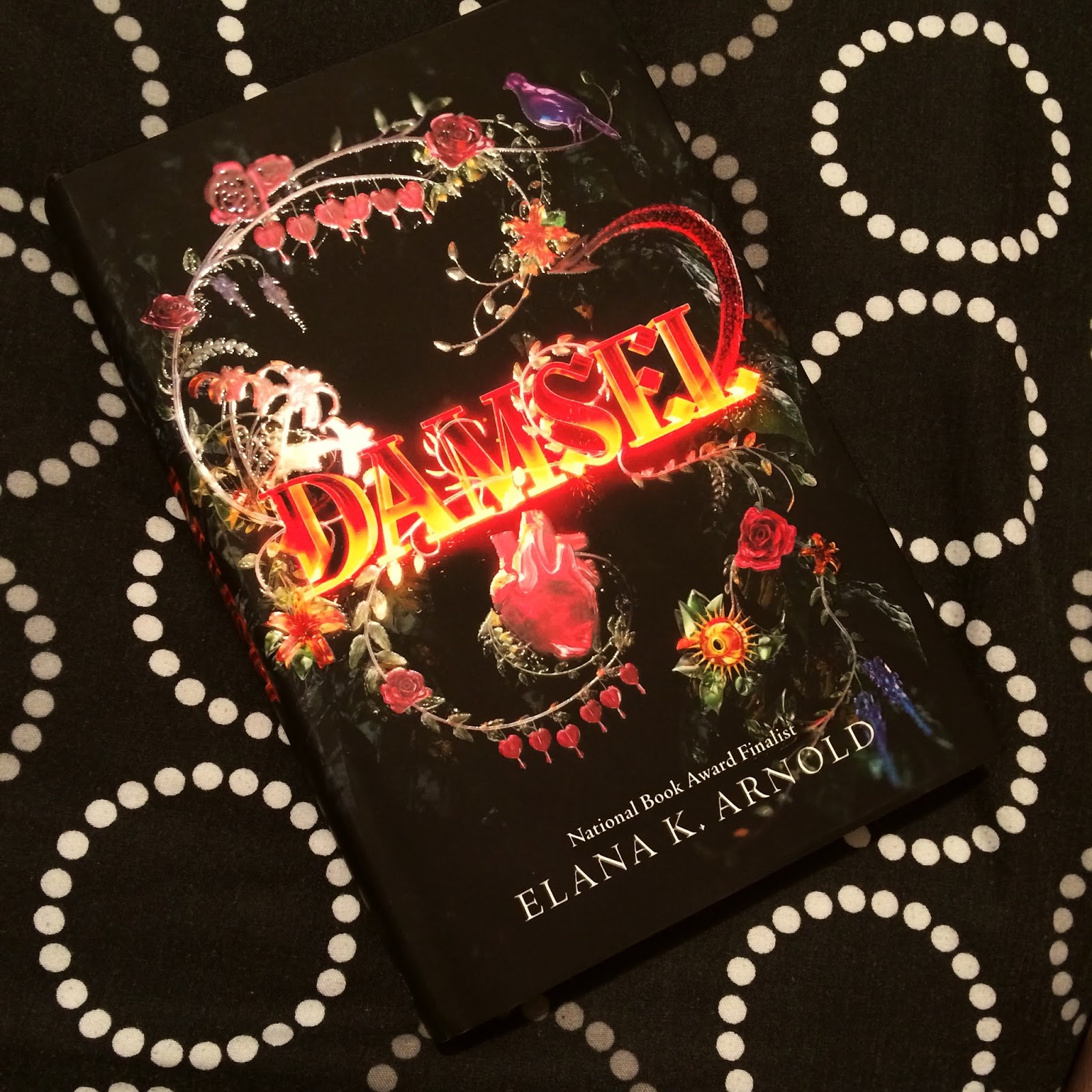 The rite has existed for as long as anyone can remember: when the prince-who-will-be-king comes of age, he must venture out into the gray lands, slay a fierce dragon, and rescue a damsel to be his bride. This is the way things have always been.

When Ama wakes in the arms of Prince Emory, however, she knows none of this. She has no memory of what came before she was captured by the dragon, or what horrors she has faced in its lair. She knows only this handsome prince, the story he tells of her rescue, and her destiny to sit on the throne beside him. Ama comes with Emory back to the kingdom of Harding, hailed as the new princess, welcomed to the court.

However, as soon as her first night falls, she begins to realize that not all is as it seems, that there is more to the legends of the dragons and the damsels than anyone knows–and that the greatest threats to her life may not be behind her, but here, in front of her. From Goodreads.

I've wanted to read Damsel by Elana K. Arnold since I first heard of it. A feminist story that takes fairy tale tropes and turn them on their head? A story that makes us question damsels and heroic princes, and the life that comes after. But while Damsel is a powerful and thought-provoking story, I was a little disappointed.

The young woman wakes up in Prince Emory's arms, naked, with no memory of anything that came before. Prince Emory tells her that she is a damsel, who was held captive by a dragon, and he has rescued her. As far back as anyone can remember, this is how it has always been: for a prince to become king, he must rescue a damsel from a dragon, and then she will become his wife, his queen. He gives the girl a name - Ama, he gives her a home, he gives her clothes, he gives her servants, and a life of luxury. But who is she? She has no recollection of anything, but discovers quickly what is expected of her. Emory prefers it when she is docile and submissive, when she asks for his permission, when she says "please", when she is need of his rescue. She is not allowed to do as she wishes, she is not supposed to want anything. But she does want - or rather, she doesn't want this life. She is isolated, friendless and alone in a palace surrounded by servants. But every now and then, she will have a flicker of memory; colour, heat, something, and she knows there has to be more to her and why she was being held captive by the dragon than anyone is telling her. But she is just a damsel, to become just a queen, and it is not her place to question.

'"It is a king's world in which we find ourselves, Ama. A woman, you see, is a vessel. And it is a vessel's duty to be filled. What is a cup without wine? What is a vase without flowers?"' (p176)
As I've said, Damsel is very powerful and thought-provoking. It takes what we know of fairy tales, and makes us question everything. Does a damsel really need rescuing? Why does she have to marry her rescuer? What is her life like after she has been rescued? Does she get a say in any of it at all? Damsel is a story that will make you so very angry as you watch Emory control Ama, and watch Ama bend and fold herself in order to please him, just so that she has an easier life.

'"That is the way of being a woman, to carve away at herself , to fit herself to the task, but, also, to be able to carve herself in a different way, when a different shape is needed."' (p173)
This is not an easy book to read. Ama is trapped in the life that has been forced upon her, and has no say in anything, and you can feel it with her. What is so startling is how it is written; it's written just like a fairy tale, enchanting and captivating, and then you'll have the prince's attitude towards women, or a lesson taught by a servant to Ama about the role of women strike you like a punch in the gut. In this fairy tale, told in a way that seems magical and lovely, we get a story that is a lot more likely.

'"You see, Ama, it is for men to create. It is for men to decide. It is for men to speak. It is your place to listen, and follow, and gestate. And those are no small things! For without women to listen, how would men's words be heard? Without your fertile womb, how could my son hope to grow? You are important, Ama. Desperately important. But do not overreach."' (p303)
'Fabiana blinked at her. "Lady," she said finally, "you are greatly mistaken if you think it matters one whit whether I find pleasure or pain with my king's yard, or, for that matter, whether or not you do. What matters, only, is my king's pleasure. You, and I, and whichever other girls take his fancy, we are all servants to that."' (p167)
'"And that is the way it has always been," the queen mother said again. "And if something is the way it has always been, who are we to wish it otherwise? Who are we to want anything at all? Who are we to desire?"' (p292)
There are moments of completely casual sexism, and then there are terrible, horrifying moments that made me feel sick. This book really is staggering. What I found interesting was how the life of the lynx cub Ama's rescues and makes a pet, Sorrow, is almost a mirror of her own.

'If Sorrow were to be allowed to stay, there were certain things that she would need to be trained away from doing, and Ama knew it. The lynx must not bite, or claw, or growl--most especially, she must not menace Emory. She must be tamed. She must be controllable. She must learn to submit to the powers greater than she, if Ama were to protect her.' (p223)
'What was wrong with this animal? Did she not know that her very ability to stay at the castle depended on Ama's ability to bring her to heel? Did she not understand that it was her duty to submit to Ama, just as it was Ama's duty to submit to Emory? And why should Sorrow feel as though she had any right to an opinion, or a preference, or a desire at all, for that matter?' (p271)
The last quote makes it sound like Ama treats her lynx cruelly, but it's coming from frustration. She loves Sorrow, and is desperate to keep her safe, because Emory has threatened to kill her several times. If Ama cannot train her, he will kill her. And there's the frustration that she has to bend to the will of others herself, and how trapped she feels. And that she is being told the only way to train the lynx is to make her fear her as well as respect her, and she is being told to strike her, and she desperately doesn't want to. Everything is coming to ahead, and Ama is struggling to cope.

As powerful and thought-provoking as Damsel it, I was disappointed in how very little happens. I get the story is about Ama's life at the castle, the treatment from Emory, the expectations of and attitudes towards women, and in a sense, that's why nothing happens, because that is her life... but there were quite a number of times when I was just waiting for more. The big moments were at the beginning and the end, with a smaller one in the middle, but otherwise, it's just normal, everyday, oppressive life.

I was also disappointed that I actually worked out the mystery behind Ama's life before she was rescued very early on. I don't know if I just figured it out, or if it was obvious, but it did bother me that Ama was questioning her past, and I knew from the offset. I would have liked the hints to be a little more subtle. And the ending, where Ama discovers the truth, and the consequences of that just happened so fast. It was a matter of pages, and it was over. I would have preferred that to be drawn out longer, and had some more questions answered. We find out what Emory did to conquer the dragon, (and what his third weapon - on top of his sword and his brain - was, which I found very interesting), but not the reason behind why what he did worked, or what exactly happened. Nor how the very end of the story happens, either. Those are details I feel are needed to make the story a little more believable.

Damsel is an important story, and one everyone should read, but I also expected more. So I'm left with mixed feelings. As long as you don't expect much once Ama has been rescued, I think Damsel will be an enjoyable - though rage-inducing - read.

Karen Wiesner: I Have Dreamed a Littl…
5 things to look for when shopping fo…
Top Back-To-School Preparation Tips &…
Blues Guitar Legend ‘The Jimmie Vaugh…
The Sign of Four
--
If you enjoyed this post, feel free to follow me on:
Bloglovin' | Twitter | Goodreads


This post first appeared on Once Upon A Bookcase, please read the originial post: here
People also like
Karen Wiesner: I Have Dreamed a Little Dream (Authors and Dream Inspiration), Part 2
5 things to look for when shopping for Australian jewellery
Top Back-To-School Preparation Tips & Activities
Blues Guitar Legend ‘The Jimmie Vaughan Story’ Set To Release September 17
The Sign of Four