Review: Father Christmas and Me by Matt Haig 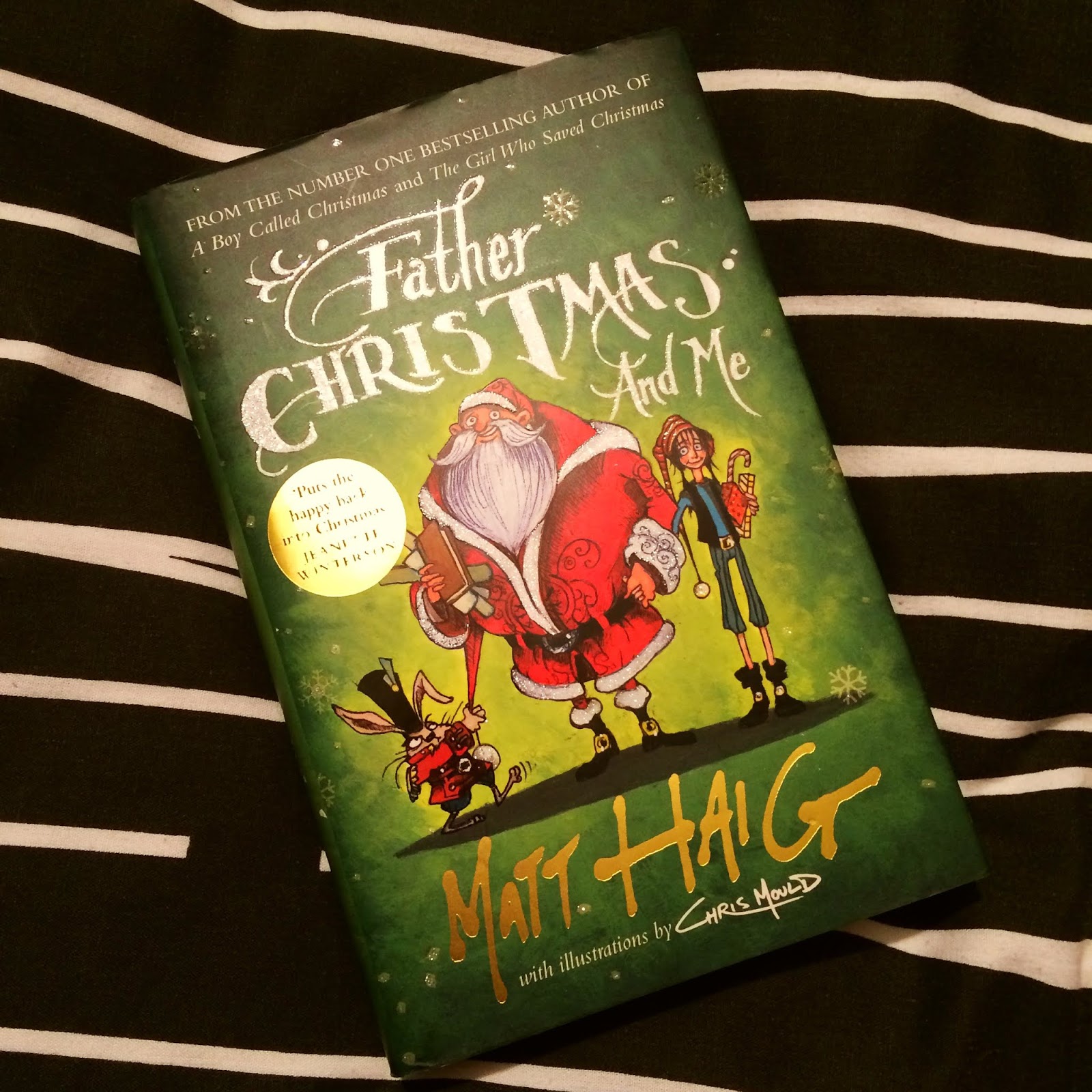 Father Christmas and Me by Matt Haig

It isn't always easy, growing up as a human in Elfhelm, even if your adoptive parents are the newly married Father Christmas and Mary Christmas.

For one thing, Elf School can be annoying when you have to sing Christmas songs everyday - even in July - and when you fail all your toy-making tests. Also it can get very, very cold.

But when the jealous Easter Bunny and his rabbit army launch an attack to stop Christmas, it's up to Amelia, her new family and the elves to keep Christmas alive. Before it's too late... From Goodreads.

WARNING! I cannot review this book without spoiling the others in the series. Read no further if you're planning on reading this series and don't want it spoilt for you.

I don't know what it is, but there is something so absolutely charming about children's books to do with Christmas. Maybe it's the magic that they're about, but they just seem so magical to me. You don't really get more magical than Father Christmas. And as someone who has the fondest of memories of Christmas as a child - who would get so excited on Christmas Eve, leaving out a glass of milk and a mince pie for Father Christmas and a carrot for Rudolph, after going to the cinema to see a Christmas movie that normally starred Father Christmas (followed by a drive around the West End to see all the Christmas lights), to then wake up the next day and be amazed to see a pillow case full of pressies from Father Christmas - any stories to do with that jolly old man in the red suit feel so nostalgic to me, and take me right back to that type when Christmas was all magic and joy. And Father Christmas and Me is no different.

In this, the final book in the Christmas trilogy, we see Amelia's first year in Elfhelm, after helping to save Christmas in the previous book. Being human, and also being particularly tall for her 11 years, Amelia sticks out like a saw thumb, and doesn't really fit in. She's finding going to Elf School really difficult, because Elf lessons aren't like human lessons. She hasn't been drimwicked, so she has no magic like the other elves, and therefore can't spickledance properly, as she can't levitate. Elf maths is a lot different from human maths, and doesn't make any sense. Geography is only concerned with Elfhelm and it's history. She's not doing well, and the elves talk about her and laugh at her. The only things she's really good at are writing and flying the sleigh - but the first time she's actually allowed to fly a sleigh in Sleigh Craft, things go horribly, horribly wrong. Which others will use to their advantage to try and rid Elfhelm of humans once and for all.

'"Books," said Father Christmas, "are the greatest gifts of all. Nothing else comes close."' (p115)

Father Christmas and Me is such a charming story, and while this one is slightly a little less about Christmas itself, it's still, at it's core, about the magic and joy of Christmas, and the hope it brings - because again, Christmas is in danger of not happening. But it's also so funny! I absolutely love the Truth Pixie her straight-talking inability to not say what's on her mind has her coming out with the funniest things! And her not being human, she sometimes gets things a little wrong - like when she thought Captain Soot, Amelia's cat, was a horse. She just cracks me up, and I love her.

But as well as being funny, and about the magic of Christmas, Father Christmas and Me also touches on broader themes. With how Amelia is struggling to fit in, and the way she's treated, it touches subtly on themes of treating people badly because they're different from you, so hints at racism. And with the Truth Pixie having fallen in love with someone who isn't also a pixie, it also points out that it's ok to love someone who isn't the person most people would expect you to love - the Truth Pixie even says, "Love is love is love." (p94)

Father Christmas and Me is another charming story and the perfect conclusion to this wonderful trilogy. The ending was just gorgeous! And even though it's for even younger readers, I'm really looking forward to reading the companion story, The Truth Pixie, as it's about one of my favourite characters!

I can't recommend this wonderful trilogy enough! It will charm and delight children and grown-ups alike!

Review: Father Christmas and Me by Matt Haig