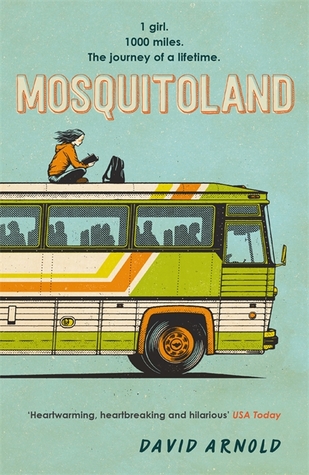 Mosquitoland by David Arnold (review copy) - When her parents unexpectedly divorce, Mim Malone is dragged from her beloved home in Ohio to the 'wastelands' of Mississippi, where she lives in a haze of medication with her dad and new (almost certainly evil) stepmom.

But when Mim learns her real mother is ill back home, she escapes her new life and embarks on a rescue mission aboard a Greyhound bus, meeting an assortment of quirky characters along the way. And when her thousand-mile journey takes a few turns she could never see coming, Mim must confront her own demons, redefining her notions of love, loyalty, and what it means to be sane. From Goodreads.

Trigger Warning: This book features sexual assault, suicide, forced treatment by father of a mental illness the main character doesn't seem to have, very negative stereotype of a person with what I believe to be Schizophrenia, an intersex slur, and likening a person with Down's Syndrome with a pet.

Mosquitoland by David Arnold sounds like such a fantastic story, but unfortunately, I finished it not knowing what to think.

Mim - Mary Iris Malone - has been living in Mississippi with her dad and stepmum for three months, after her parents quickly and unexpectedly divorce. When Mim overhears her dad and stepmum talking to her principle and mention that her mum is very ill, Mim decides to sneak off with her stepmum's savings, and letters her mum sent her stepmum about wanting contact with Mim, and get a bus to travel the 1000 miles back home to her mum. But things are not completely what they seem.

I have no idea what the point of this book was. Mim wants to see her mum, so she goes on this road trip, and it ends once she finds out some stuff. As she's travelling, a number of things happen, but for what purpose, I don't know. Some of them are just completely random; yes, let's have Mim end up in the company of a guy who "has emptiness in his eyes", who it turns out has a mental illness when she discovers him talking to himself in two different voices, where's he's planning to kill her and their other companion. Because why not? And why not perpetuate a really problematic stereotype of mental illness while we're at it? And then let's have that situation resolve and move on. Or meet the nice old lady on the bus who wants to take a box to her nephew, and then end up with Mim trying to deliver it for her, and then she delivers it, and move on. It's full of random happenings that seem so completely pointless, and don't really make any difference to the story. I finished the book thinking why? Why did all those things happen on the journey? In my opinion, it was all so pointless it could have all been cut out, and just have her arrive at her destination a few days later and continue the story there - and then make a full length story. Though how I don't know, because I was really disappointed in the ending, too. After that long journey, and all those random things, that's how it ends? Really?

It was also written in a really strange way. I barely understood what Mim was on about half the time, when she's having her moments of introspection - and even when she wasn't. I don't know if it was Mim or if it was Arnold trying to be arty, but I didn't even know the bus was in the middle of a crash until after it had happened. The description is so odd. She's in the toilet, putting on her "war paint" - drawing on her face with lipstick - and she seems to be having some kind of weird moment with herself:

'I star at my reflection in the shaking mirror, clutching the sink for balance. I am blind and wet, and my name is Mary, not Mim, and I've never been in a fight, never been on a boat, never quit a job, never been to Venice, never, never, never . . .
The bottom drops out, and I'm down, on my side, floating in a strange sudden weightlessness, as if in water or out of space. From far away--one, two, a thousand pleas for mercy, animal-like screams, rabid and seething for survival. A minute, an hour, a lifetime--there is no time, there are no Things. I have no more Things. I have only scraping metal, screaming voices, and death.' (p58)

That first paragraph is her in the bathroom, thinking weird things like she does, but the second paragraph is the bus crashing. But when she thinks and talks the way she does, I had no idea the bus was crashing, I thought that was ore of her strange thoughts as she's staring into the mirror, because she thinks in metaphors and strange ideas. And it's like that all the way through. There was a lot that just didn't make any sense to me.

A thread that weaves it's way throughout the story is Mim's mental health. Through flashbacks, we know her dad seems to think she has a mental illness, or is scared that she does, like his sister, Isabel. Because of this, and not wanting her to end up like Isabel, she has seen various doctors. One who Mim quite liked, and then another who just dosed her up on pills, after her dad read a book and decided pills is what she needs and not talking. But there isn't a single moment throughout the book - in the flashbacks, in the present, or in the things she writes in her journal - that points to a mental illness. Her dad believes she has psychosis, which means she would have either hallucinations or delusions. Only at the end does she wonder if some people she has been travelling with were actually real or not, but then there's proof that they do actually exist. Otherwise, there are no signs of hallucinations or delusions, no specific signs of any mental illness I could see. And the book metions towards the end that her dad could even be wrong about her having a mental illness. So not only am I not seeing any signs, Mim thinks she may not have one herself. It's just her dad being over protective and scared, and forcing her to see doctors and take pills she probably doesn't need, and oh my god, what the hell?! Is that not child abuse?! Please explain to me how this is ok?! And how it would actually happen? I mean, doctors wouldn't prescribe pills unless they were needed, right? So how comes, not once during any appointment we see do Mim and her doctors ever talk about the symptoms of her mental illness? Even with nice Dr. Makundi, who Mim likes, and doesn't prescribe her anything? So not only am I mad, I'm also confused as to how this even happened?

But it's not just a story that seems to have no purpose, or the child abuse, or features a problematic stereotype of a person with mental illness. There are also things that Mim says and thinks that are problematic. At one point she describes someone as a "debauched he-she in cowboy (cowgirl?) chaps" (p179) - which is obviously not ok! I can't believe that even needs to be said! I can't believe it made it through editing. Later in the book, she ends up in the company of a college guy, Beck, and a boy about her own age with Down's Syndrome, Walt. Walt ends up getting really ill, and they need to take him to a doctor, but all clinics are closed for the Labor Day weekend - the only place open is a vets. It sucks, but he needs help, what else can they do? So they take him, and he gets some help. But then this:

Are you serious?! Really?! Mim really just said a boy with Down's Syndrome is their pet?! I have no words. I mean, that's just so god-damned offensive! How did this get through?! Sure, it's probably realistic for who Mim is, because she's not the nicest of people, but to not have it challenged? Tohave Beck laugh along with her? To make it seem like what she just said is ok? So wrong. So goddamned wrong!

Mosquitoland wasn't for me. I didn't enjoy it, I didn't see the point of it, and there was just far too much about it that was just so wrong, in my opinion. I didn't like this book, and I wouldn't recommend it. However, there are a lot of people who loved this book, so do read some other reviews before deciding whether or not to read it.

Thank you to Headline for the review copy.


This post first appeared on Once Upon A Bookcase, please read the originial post: here
People also like
how to improve vision in 7 days
Shen Men Piercing: Does it work for Anxiety and Depression?
On the Inherent Ableism in Thinking You’re a Good Teacher
Mental Slot Review and Playtest (NoLimit City)
How to Price Your Craft & Design (part 1)
Attracting Healthcare Talent in the Post COVID Market
The 11 best tips to become a massage therapist!
Why Furries Make Excellent Hackers
Teen Depression: Essential Signs & How Parents Can Help