Discussion: My Thoughts on Sensitivity Readers and the Censorship Argument 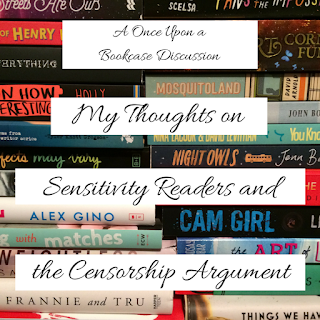 On Christmas Eve,  an article went up on the New York Times, 'In an Era of Online Outrage, Do Sensitivity Readers Result in Better Books, or Censorship?' There was a lot of anger at this article as a number of those who were interviewed for it in favour of sensitivity readers had a lot of what they said cut short. The major points they had to say were left out. Then, on Christmas Day, author Joyce Carol Oates, in a quote tweet to Dhonielle Clayton (YA author of upcoming The Belles) - who was tweeting about how she was angry with the article, that not everything she had to say in the interview was included, and that she would like to write about the reason sensitivity readers are needed is because publishing favours the privileged over the marginalised -  spewed a lot of racist tweets about how if people don't like the stories, don't read them, and they should start their own publishing houses to get their books published. As you can imagine, that really didn't go down well with anyone, and a lot of people hit back hard.

Yesterday, Vulture published a fantastic interview with Dhonielle Clayton, 'What the Job of a Sensitivity Reader is Really Like', which goes into what sensitivity readers actually do, why they are important, but also why there is a need for sensitivity readers - namely, because publishers are publishing books by privileged authors writing about the marginalised over books by the marginalised. Clayton makes some really important points about how sensitivity readers aren't really the answer to the problem that people of colour are being shut out of publishing, how white authors writing about people of colour - who think they're helping - are taking a place away from an an author of colour, because publishers have turned down manuscripts about people of colour when they already have one on their list. It's a really, really important article, and I urge you all to read it. I know some people will think that privileged authors can't do right for doing wrong; if they stay in their own lane and don't write diverse books, they get flack, but now if they try to write diverse books, they're taking a spot away from someone else. However, that's a conversation for another time - but for my two penneth worth, privileged authors have always had the monopoly on publishing; I don't think they get to complain about how difficult it is when marginalised authors have been practically ignored or dismissed for this entire time. They don't know what difficult is.

What I want to talk about is another reason why I think sensitivity readers are also important. I want to talk about this in relation to mental health, though I think my points will work for some other marginalised groups, too. I am not an author, but if I was, I don't think I could write a story about a character with anxiety. Not only would it feel personal, exposing, but it would be difficult, upsetting, to write. I know there are authors who steer clear from writing about the marginalised groups they belong to for this very reason. Authors don't have to declare their marginalisations, nor do they have to write about them if doing so would be detrimental for them. And yes, there are some authors who are writing #OwnVoices books featuring characters with mental illness, like Louise Gornall and Adam Silvera, but of course we need more, and if other authors with mental illnesses don't want to for whatever reason, then authors without a mental illness can fill that gap.

But representation matters. A book doesn't have to be #OwnVoices to have good rep, and this is where sensitivity readers come in. So much harm can be done with bad representation. Not only can it be offensive and upsetting to those from the marginalised group, it can be harmful and perpetuate stereotypes and ideas about a marginalised group that are just plain wrong. For example, I read a book featuring a character who had anxiety, and there was a lot the book got right - the character's experiences of anxiety and panic attacks felt very similar to my own. But then, how the characters got past their panic attack so quickly, and then was able to deal with the trigger of their panic attack pretty soon after without a worry seemed highly unrealistic to me. Now, I don't know if the author of this book sought out sensitivity readers, maybe they did. Maybe there are people who have anxiety who can get past a panic attack quickly, and then no longer have a problem with their trigger. But in my experience, and having talking to other people with anxiety, this doesn't feel like the case. Now, it didn't upset me or offend me, but it can do harm. If a person who doesn't have anxiety reads that book, sees the character get over their panic attack quite quickly, they may assume it's not actually a big deal. And if it's not a big deal, then when the readers is around someone who has a panic attack, and they're not getting over it quickly? How is that reader going to react? Will they think they're attention seeking, or making a big deal out of nothing? That they should just get over it and pull themselves together? Because they know it's pretty easy to get over a panic attack, they know it's easy to get past issues with a trigger. This attitude is harmful, and this book could perpetuate it.

In similar circumstances, a sensitivity reader may have picked up on how the character recovers from their panic attack and seems to have no real problem with their trigger afterwards. They could have told the author that this isn't how things are, and the stigma of mental illness it upholds. The author could have worked on their story more and made it better.

As I said, I don't know if the author had sensitivity readers or not, and maybe I'm wrong, and some people have an easier time with their anxiety. This is just an example of how sensitivity readers could - and do - make a huge difference. They're needed. It's not censorship to expect good representation, and for an author to do all possible to make sure that the representation is so. Readers, especially child and teenage readers, need authors to make sure their book is the best book it could possibly be, because once that book is published, it's not theirs any more. And if they hurt or offend their readers, because they didn't want to fix their story because it was too inconvenient, or it would mean changing a lot of their story, or they were indignant at the thought that they could possibly have got something wrong, then their readers don't matter to them at all. It seems to me they care more about themselves, the story they want to write rather than writing an accurate story, and to hell with how readers from the marginalised group they're writing about feel about it. And if that's the case, I really don't think they have have any place writing at all.

Discussion: My Thoughts on Sensitivity Readers and the Censorship Argument