Review: A Fierce and Subtle Poison by Samantha Mabry 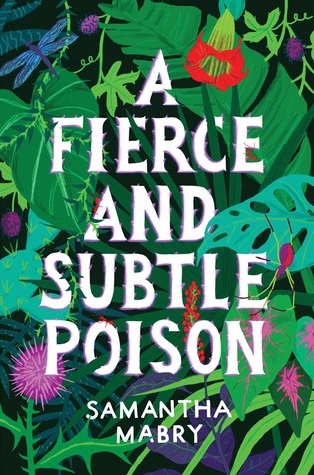 A Fierce and Subtle Poison by Samantha Mabry (eProof) - Everyone knows the legends about the cursed girl--Isabel, the one the señoras whisper about. They say she has green skin and grass for hair, and she feeds on the poisonous plants that fill her family’s Caribbean island garden. Some say she can grant wishes; some say her touch can kill.

Seventeen-year-old Lucas lives on the mainland most of the year but spends summers with his hotel-developer father in Puerto Rico. He’s grown up hearing stories about the cursed girl, and he wants to believe in Isabel and her magic. When letters from Isabel begin mysteriously appearing in his room the same day his new girlfriend disappears, Lucas turns to Isabel for answers--and finds himself lured into her strange and enchanted world. But time is running out for the girl filled with poison, and the more entangled Lucas becomes with Isabel, the less certain he is of escaping with his own life. From Goodreads.

A Fierce and Subtle Poison by Samantha Mabry sounded like such an incredible read, and while I did enjoy it, I was so very disappointed.

The description is very misleading. The description gives the idea that some magical creature lives on the island. And to an extent, that's kind of true, in that she is an impossibility, but she is not a girl with green skin and grass for hair, who can grant wishes, or has magic. She is a girl whose touch could kill, but only because she has poison running through her veins due to a family curse - poison that is slowly killing her. Otherwise, there's nothing special about her. That sounds awful, but I just expected so much from Isabel, and she's not what anyone believes. It's funny because the description talks about "legends", it's not saying it's true - but when it comes to fantasy, the legends normally turn out to be true. Just not all of them in this case.

A Fierce and Subtle Poison is pretty much a magical realism and mystery mash up. In Puerto Rico, where Lucas spends his Summers with his father at the hotel his father's company owns, girls are going missing, but then their bodies wash up against the shore a few days later. Marisol, a girl Lucas has just started seeing, is the latest girl to be found washed up on the shore. The same day she goes missing, Lucas receives a note from the cursed girl living in the house at the end of the road underneath his door; he knows it's from her, because it's on the paper Marisol had written her wish on before throwing it over the girl's wall, on it saying she can't grant Marisol's wish. On the day Marisol's body is discovered, another note is pushed under Lucas' door, this time written on a wish he threw over the girl's wall a number of years ago. This one saying she knows something about what happened to Marisol. But then Lucas finds out the girl is just Isabel, a girl who is dying from the poison in her veins, a girl who's only survived this long because of the poison plants in her garden which absorb her power, but it's not going to work always. There doesn't seem to really be any link between the missing girls and Isabel - Isabel was just annoyed that people were throwing things over her wall, and jealous of the life they could live. Lucas wants to work out the mystery of Marisol's death, but he's now also drawn to Isabel, and wants to help her survive.

It just wasn't the magical story I was expecting. Isabel is more ordinary than I was led to believed, even if she's not that ordinary. I was expecting something much more magical. And although it's a mystery that is interesting and keeps you reading, it's also a pretty predictable one, and I figured out pretty early on what was happening.

However, I did love the magical realism aspects of the story; why Isabel had poison in her body, the curse on her family, and if she would survive, but there isn't much of a focus on that part. It's almost second to the mystery. But I did love how things just were; Isabel is poisonous because of a curse, but there's no explanation as to how the poison got there, or how the curse worked. It just is, and you have to accept it. And I love that about magical realism, how, if it's done right, you don't even question it.

I also loved that the book was set in Puerto Rico - the descriptions of the place were just so gorgeous - and how almost every character bar Lucas, his father, and Isabel's father, are Latinx (which you would expect, right? But I have previously read a book that was set in a different country, and yet all the named characters were from the US or the UK, so this seems like something to point out as a good thing). Well, I think Lucas is white; he's called a "gringo" like his father, and he looks white. There is a conversation between Isabel and Lucas about his ethnicity, because his mum was from the Dominican Republic - Isabel says that she wouldn't have thought he was half Dominican, but Lucas replies that if she met his mum, she'd think he looked just like her, because she had blonde hair and blue eyes. She was adopted in the Dominican Republic by a white couple, and she was brought up there, but Lucas doesn't know anything about her biological parents. So she may be white? The blonde hair and blue eyes seem to indicate that, but I know not only white people have blue eyes, and I'm sure not only white people have blonde hair. So it's a possibility she's not white, but it's just not known, because she never knew anything about her biological parents.

Thank you Algonquin Young Readers via NetGalley for the eProof.


This post first appeared on Once Upon A Bookcase, please read the originial post: here
People also like
How to Get Rid of Mice – 5 Methods
Philippine government pressed to put policies to bring GM crops like Vitamin A-rich rice to help solve worsening global hunger, malnutrition
Decade Defining Rap Songs Of The 2010s [2010 – 2019]
The Best Books For Kids About Racism For All ages
Thor, the archetype of the epic hero in comics.
Exhibit B: Talking food and family with Sufiya Abdur-Rahman
Case Study: Helping an Automotive Oil Company Grow their Sales Reach
Journaling to Enhance Productivity and Well-Being
Justin Sun’s Charity Lunch with Buffet Could Have A Big Guest – The POTUS
Hot Platters: Chris Whitley - Living With The Law (Columbia Records, 1991)
Threadbare
International YA Translated into English
Days Gone Review

Review: A Fierce and Subtle Poison by Samantha Mabry