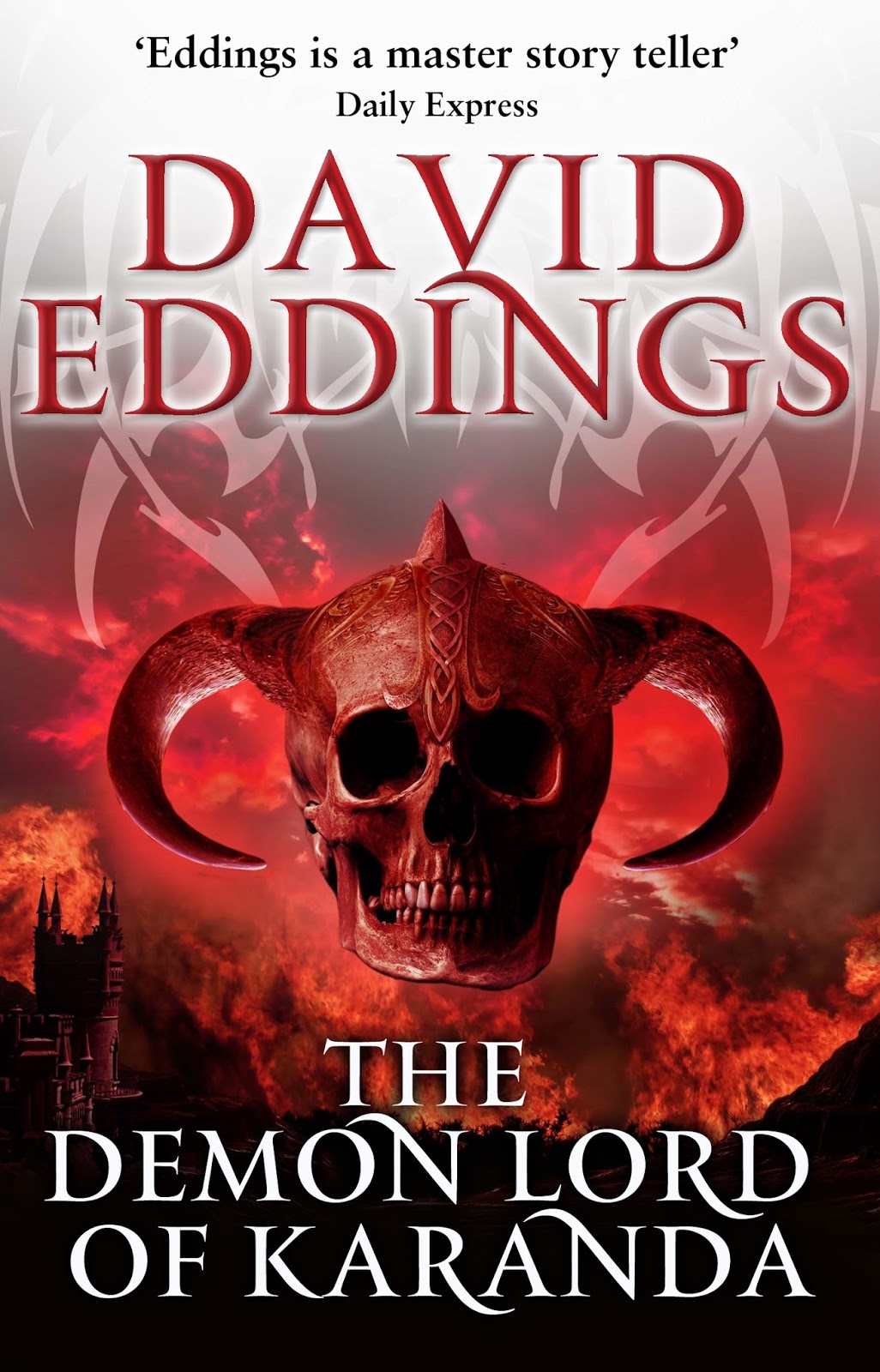 Demon Lord of Karanda by David Eddings (Borrowed) - WARNING! I cannot review this book without spoiling the others in the series. Read no further if you're planning on reading this series and don't want it spoilt for you.

In this third book of The Malloreon, Garion, Belgarath and their friends follow the quest begun in Guardians of the West and continued in King of the Murgos. It will lead them further into the dark designs of Zandramas and the strange ways of demons...

The company now knows that Garion's baby son has been kidnapped by Zandramas and is to be used in a terrible ritual which will make the Dark Destiny supreme. The group, however, has been detained by Zakath, Emperor of all Mallorea, and taken to Mal Zeth, the largest city in the world.

When a dire plague strikes, they manage to escape and, as prophesied by the Seeress of Kell, travel on to Ashaba - but, although they find Urvon, mad disciple of the evil god Torak, and the Demon Lord Nahaz, Zandramas is gone. In a desperate race against time, the company turn east once more to follow her spoor... From Goodreads.

David Eddings' Mallorean series gets even more exciting in the third book, Demon Lord of Karanda. This book involves a lot more intrigue and manoeuvring in order for Garion and his companions to get away from Zakath. Zakath and Garion have become friends, and although he's not exactly keeping them prisoner, he's adamant that no-one leave Mal Zeth - as he intends to accompany them - until his armies arrive from Cthol Murgos to deal with the troubles in the north. Mengha, a Karand, has been raising demons and taking control of the Kingdoms of Karanda, with an ever growing following building up on his way. Zakath's armies won't make it back from Cthol Murgos for three months, however, and Garion simply can't wait that long. He has orders from Cyradis, the Seeress from Kell that he must be in Ashaba at a certain time, lest his quest fail. So Silk, Velvet and Sadi have to come up with a plot that will get them out of Mal Zeth without Zakath's men following behind.

There are quite a few things that happen in this book, and it's still just as captivating as it first was. I am finding that I'm missing the characters that accompanied Garion in the Belgariad; Barak, Hettar, and Mandorallen. They're just such great characters, and I am missing them. However, Sadi, the former Chief Eunuch of Queen Salmisra in Nyissa, and Velvet, a member of the Drasnian Intelligence, are great characters themselves, and I'm enjoying seeing them add to the story. I wish there was more of Toth, though. Toth is a gentle giant who is normally the guide of Cyradis, but he is needed on Garion's quest. Toth is mute, however, and it appears, because of this, he's often overlooked in the plot. He has a way of communicating with Durnik through hand gestures, hi sown kind of sign language, I guess, but no-one else can understand him, so there are a lot of times where he's simply in the background but not doing much. Having read the series before, and knowing where Toth's story will lead, it's really annoying me that Eddings' didn't give him more page time. He deserves more. Why can't more characters have understood him? Why are his thoughts and opinions not asked for? It's like everyone forgets he's there, and they only remember when he knows something that could help them, and makes himself heard. This makes me really uncomfortable. This is a character with a disability, and it's because of his disability that he is often neglected in the story. It also means we don't get to know him, really. He's pushed into the background, and, just as I'm writing this, it's just occurred to me, the way his story goes is extremely problematic. It's actually not ok, and has made me pretty angry. I love these books, but Eddings' treatment of Toth, of a disabled character, is not ok.

What I didn't mention in my review of King of the Murgos, when talking about how the sexism and misogyny in the series is made to make a joke out of the men who have such sexist views, is how Eddings writes very strong female characters. Polgara and Ce'Nedra, we already know how incredible they are from the first series. Polgara is the most powerful woman in the world, being a sorceress, but she also stands her ground with her father when they disagree, and is a character who can solve problems when others can't, through her own ideas. Ce'Nedra is tiny, but she is fierce, and will not be treated like a fragile little girl. And in the Mallorean, we meet Liselle, also known as Velvet, who is also a strong, feisty lady.

'[Zakath] sighed with mock regret. "Where were you when I needed a wife?"
"Probably in my cradle, your Majesty," [Liselle] replied innocently.
He winced. "That was unkind," he accused.
"Yes," she agreed. "True, though," she added clinically.
He laughed again and looked at Polgara. "I'm going to steal her from you, my Lady," he declared.
"To be your court jester, Kaz Zakath?" Liselle asked, her face no longer lightly amused. "To entertain you with clever insults and banter? Ah, no, I don't think so. There's another side to me that I don't think you'd like very much. They call me 'Velvet' and think of me as a soft-winged butterfly, but this particular butterfly has a poisoned sting--as several people have discovered after it was too late."' (p120)

Sadly, in Demon Lord of Karanda, there were a few moments of sexism that weren't meant to make a fool of men. They were meant to be funny, however, and it really wound me up when characters disrespect for women for their own amusement.

'About halfway to the imperial platform, however, a blond Melcene girl in a low-cut gown caught [Belgarath's] eye. She stood stricken with awe, unable to curtsy or even to move as the most famous man in all the world approached her. Belgarath stopped and looked her up and down quite slowly and deliberately, noting with appreciation just how revealing her gown was. A slow, insinuating smile crept across his face, and his blue eyes twinkled outrageously.
"Nice dress," he told her.
She blushed furiously.
He laughed, reached out, and patted her cheek. "There's a good girl," he said.
"Father," Polgara said firmly.
"Coming, Pol." He chuckled and moved along the carpet towards the table. The pretty Melcene girl looked after him, her eyes wide ad her hand pressed to the cheek he had touched.
"Isn't he disgusting?" Ce'Nedra muttered.
"It's just the way he is, dear," Garion disagreed. "He doesn't pretend to be anything else. He doesn't have to." (p 131-132)

Considering what's happening in the world today, I'm really not happy with a man of power and authority treating women with such disrespect simply because he can. It's disgusting, and I was so disappointed with Eddings reading this, so angry with Belgarath, and at Garion for defending him. Just the way he is? So we let him get away with it? I am fuming.

In a conversation between Zakath and Garion about Sadi selling drugs and poisons to Zakath's people, with Zakath asking Garion to tell Sadi not to sell poisons anymore, we get this little gem.

'"I'll have a talk with him," Garion promised.
"I'd appreciate it, Garion." The Emperor's eyes grew sly. "Just the poisons, though. I find the effects of some of his other compounds rather amusing. Just yesterday, I saw an eighty-five-year-old general in hot pursuit of a young chambermaid. The old fool hasn't had those kind of thoughts for a quarter of a century."' (p157)

I'm sorry, but what is so funny about attempted sexual assault/rape? This woman is being chased, she is trying to get away, and he finds it funny?! No. I just can't with how disgusting this is. I am so angry, and so disappointed. This is just not ok.

And it's hard. Because I do love these books, I love Eddings, it was his books that got me into reading. And to discover now that these books are actually really problematic? It's upsetting. It's really, really upsetting. I just hope this is the last of it I see as I move on to the fourth book in the series, Sorceress of Darshiva.