Review: T is for Tree by Greg Fowler 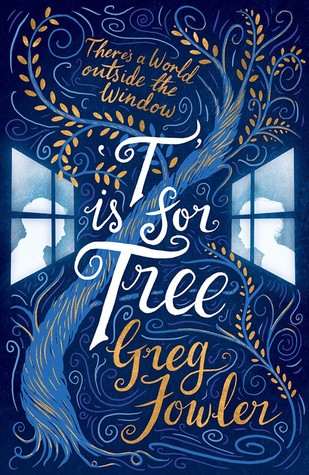 Abandoned by his mother and kept locked away by his grandmother, Eddy must spend his life watching the world go by from his bedroom window. Until Reagan Crowe moves in next door and everything starts to change. She’s kind, funny, beautiful, and most importantly, she’s Eddy’s first friend. Over time, Reagan introduces Eddy to the strange and wonderful world outside his bedroom: maths, jam, love.

But growing up isn’t that simple for either of them. And Eddy has a secret. The tree that’s slowly creeping in through his window from the garden is no ordinary tree. But then again, Eddy’s no ordinary boy. He’s special...

Set over the course of five years, T is for Tree is moving, life-affirming, and shows that we can all find greatness in the small things. From Goodreads.

Before I start this review, I must warn you that it will be full of spoilers. This is because I feel this is an incredibly problematic and harmful book, and I need to explain my reasons why.

T is for Tree by Greg Fowler is about a boy, Eddy, who has Down's Syndrome. I don't know this because it tells us in the book - all the book tells us is that Eddy is different, and that his face isn't like other people's faces. From what we're told, I assumed he may have Down's Syndrome, but this is never confirmed in the book. The only reason I know for sure that Eddy has Down's Syndrome is because T is for Tree was originally self-published as Jam Sandwiches, and it says so in the blurb for that book.

I should point out before I go any further that I don't know anyone with Down's Syndrome, nor do I know much about it at all. However, pretty much the whole way through reading this book, I was distinctly uncomfortable about the representation. First, there is the tree. A branch from the tree next door to Eddy's house has started growing through one of his bedroom windows, a tree that vibrates when he touches it, a tree that makes him see colours - none of which is explained. But the tree also seems to change Eddy. The tree doesn't "cure" Eddy of his Down's Syndrome, but it does make him "better", or "smarter". Eddy ends up smart enough to take six GCSEs and get A*s in all of them. Simply by reading text books, at home, without a teacher. Sure, he has Reagan, his friend from next door, who will explain things he doesn't quite get every now and again, but mostly it's just through reading on his own. I don't know whether or not it's possible for someone with Down's Syndrome to to get A*s in their GCSEs, but the story puts it down to the tree. Not only does this whole thing make me uncomfortable, it also seems far fetched; five years previously, Eddy didn't know his alphabet or what letters words started with. "B is for tree" he said at one point, during a visit from Mrs Stanford, who I assume is from Social Services, but is never said. Now, five years on, because of the tree, Eddy now has six A*s. I couldn't tell in what subjects though, the book is pretty vague on specific details such as the subjects he was studying, or why exactly Mrs Stanford thought Eddy was now capable of taking his GCSEs. He just is, because he's smarter now.

To add to this, as the story goes on, the narration gets confusing. It's told in third person from Eddy's perspective, but sometimes I thought it might be told from some omnipresent unknown narrator because of the distinct change in language, but as I read on, it was clear this was all from Eddy's perspective. I am aware that not all people with Down's Syndrome have the same learning disabilities, that the learning disabilities can range from mild to moderate, but the language used in the narration is not something I would expect from someone with Down's Syndrome. To be honest, it's not the sort of language I would expect from most people. For example:

'For him at least, the feast of knowledge had a limited menu, and the most important answer of them all right now wasn't even on the page.' (p346)*

It just doesn't ring true to me. Even with Eddy being magically smarter, I can't see him thinking like that.

Then there's Eddy's Grandma Daisy. For the first 15 years of Eddy's life, Grandma Daisy has abused him. She keeps him in his bedroom, only allowed to leave to use the bathroom. She verbally abuses him and criticises him all the time. He's stupid, he's "dumb" (a word which is used so often, along with "retard", used by Eddy when he is assuming what others think of him). She is constantly looking for something to have a go at him about. She is supposed to be homeschooling him, but she isn't. She pretends that she does to Mrs Stanford, and makes Eddy lie about it too with threats of being taken away to a boarding school where they will hurt him everyday, just so she can get the benefit for homeschooling. Until Reagan moves next door, Eddy is friendless, and knows no-one except Grandma Daisy. He doesn't know love or kindness. He is bullied by his neighbours. His childhood is a living hell. But this all changes when, once the tree has grown a significant way into Eddy's bedroom, it blooms beautiful pink flowers, in the wrong season, and somehow this does something to Grandma Daisy. She turns a new leaf, full of guilt and apologies, and stops abusing Eddy. There are absolutely no repercussions at all for how Grandma Daisy treated Eddy. Nothing. Sure, she feels guilty, but she gets away with it. She doesn't suffer the consequences. Eddy forgives, and that's it. No. No way. That absolutely does not sit right with me at all. Not only is it disgusting, but it send the awful message that we should just forgive abusers, or that they will simply stop one day. This is terrible and so harmful! It's irresponsible and so appalling.

Then there's the ending. Reagan gets ill. She is ill for months, but doesn't see a doctor until she collapses. First of all, I cannot believe that she gets as ill as she does - tired and lethargic all the time with no energy, and completely not her bubbly, happy self - without her mother demanding that she go to the doctor. Oh, she and Eddy worry about Reagan, but no-one makes her go to see the doctor, because Reagan doesn't want to go. I'm sorry, it's obvious that there is something seriously wrong with Reagan, there is no-way her mother wouldn't take her to the doctor herself. It just wouldn't happen. But it does. She doesn't see a doctor until she collapses. Then they find out she has cancer, some form of leukemia - though we aren't told what form - as I said before, this book is kind of vague on the details. I'm not sure this element was researched well, if at all. When Reagan goes in for chemotherapy, she has radiation. I know a person with cancer can have both chemotherapy and radiation, but the story is written as if the process of having radiation is called chemotherapy, like the author doesn't that they are two separate treatments. She's on all kinds of drugs, though we're not told what, but in the end, the doctors can't help her, and she is taken home to die.

I am absolutely disgusted by this story. It is so harmful, and so offensive, and I can't stand it. I can't understand how this novel was picked up by a publisher. How they could read this book and think that it was ok. It's absolutely appalling. I will never read another book by Greg Fowler.

*This quote was taken from a proof, so may not be in the final draft.

Thank you to Ink Road Books for the bookseller's proof.

Review: T is for Tree by Greg Fowler