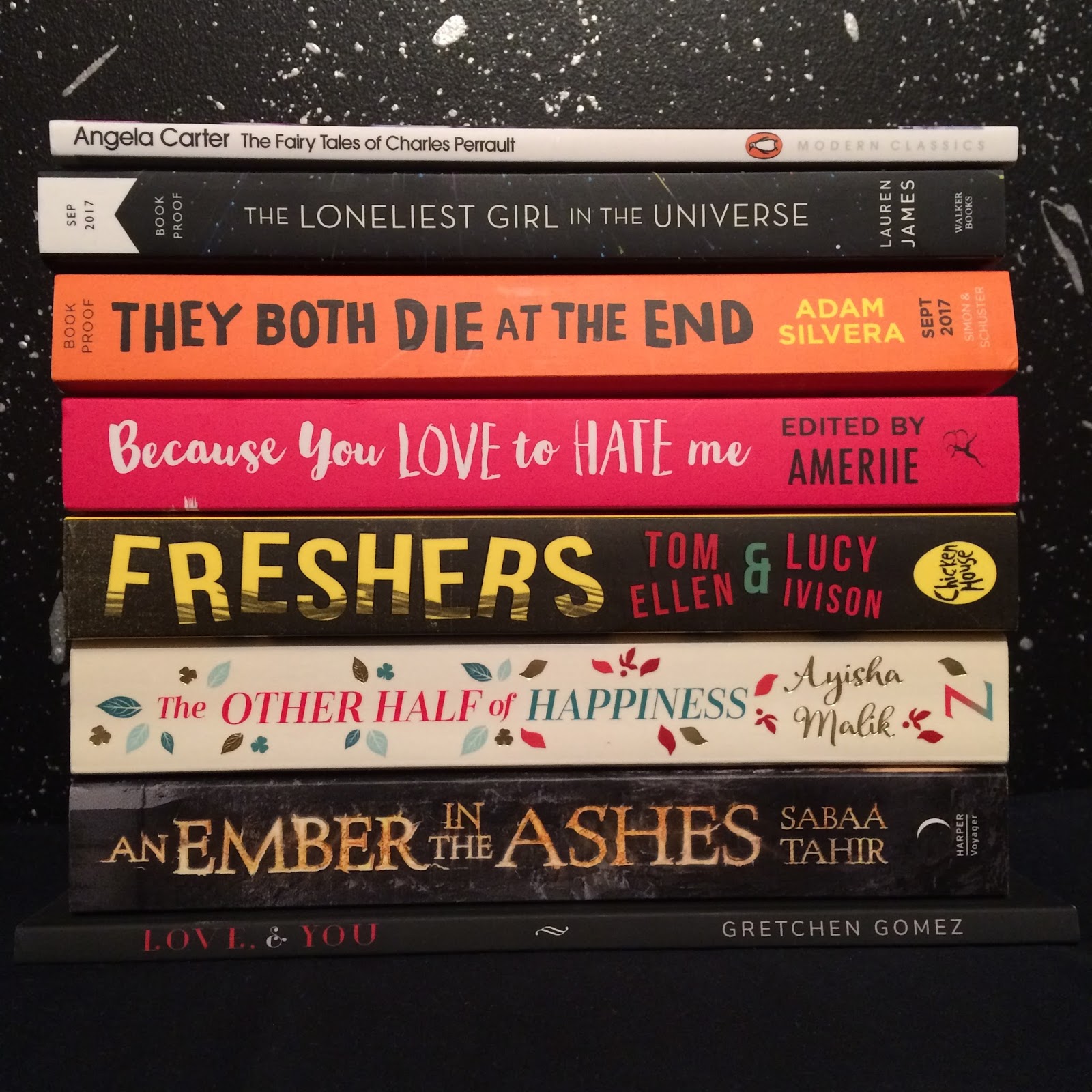 Love & You by Gretchen Gomez (4th April 2017)
I bought this after seeing Louise O'Neill recommending it on Twitter with extracts, and I just had to have me.

An Ember in the Ashes by Sabaa Tahir (11th August 2017)
I really enjoyed this book (review below) - so much I had to buy a finished copy! Comes with a map, that my proof was missing, so I'm happy.

The Other Half of Happiness by Ayisha Malik (6th April 2017)
The day I started Sofia Khan is Not Obliged, I was enjoying it so much, I decided to buy the sequel - before I was even half way through! It was SO good! See below for my review!

They Both Die at the End by Adam Silvera (7th Septmber 2017)
This book sounds incredible! And knowing Adam Silvera, it's going to be very emotional! Follows two guys who find out they only have a day left to live, and how they choose to spend that last day.

The Loneliest Girl in the Universe by Lauren James* (7th September 2017)
This sounds so intriguing! Romy, the only surviving crew member on a spaceship, who emails with J, the only crew memeber of a spaceship lightyears away. I'm hoping it's not going to be too spacey, as sci-fi isn't generally my bag. But it sounds really interesting!

Freshers by Tom Ellen & Lucy Ivison (3rd August 2017) UKYA
This sounds so good! A romance set during the first year of uni! Makes me think of Fangirl by Rainbow Rowell, but without the fanfiction. This is what I mean by New Adult. This sounds a lot better than young people having lots and lots of sex. And being by Ellen & Ivison, it's bound to be laugh-out-loud hilarious!

Because You Love to Hate Me, edited by Ameriie (13th July 2017)
I am SO HAPPY to have this book! An anthology of fairy tale retellings from the villains' point of views! And all the stories are based on challenges given to the authors by Booktubers, who also write their own story. I'm not so bothered by the Booktubers, because Booktubing just isn't my bag, but so excited for the authors stories!

The Fairy Tales of Charles Perrault by Angela Carter* (2nd October 2008)
I received this through work - if we wrote a staff pick for any title on a list of Penguin Modern Classics, we could get another title from the list for free. I wrote a pick for Charlie and the Chocolate Factory by Roald Dahl, and requested this as my freebie. So excited to read it!

Daughter of the Burning City by Amanda Moody (7th September 2017)
This sounds so good! A girl who has a circus, where she creates the illusions of people who perform - or so she thinks, until one is murdered. How awesome does that sound? I am so excited!

The Tiger's Daughter by K. Arsenault Rivera (3rd October 2017)
I have been on a serious high fantasy kick lately, and this sounds like another incredible one to add to the TBR. And it features queer protagonists! I'm really looking forward to this!

Darien: Empire of Salt by C. F. Iggulden (13th July 2017)
This sounds like a very epic high fantasy, and I'm so looking forward to it! There's going to be so much going on!

The Hundredth Queen by Emily R. King (1st June 2017)
A South Asian inspired high fantasy! Where a new queen must fight to the death for her place among 99 other wives!

Prisoner of Ice and Snow by Ruth Lauren (7th September 2017) 2017 UKMG/YA Debut
This sounds like a really cool high fantasy! A girl gets herself arrested so she can break her and her sister out. I think it's going to be really clever! Looking forward to it.

The Guggenheim Mystery by Robin Stevenson (August 2017) UKMG
This is a sequel to Siobhan Dowd's The London Eye Mystery. I want to read more middle grade, and these books feature an autistic main character, and the stories both sound so intriguing! so I'm going to give them a go. Will be getting the first book soon!

Things a Bright Girl Can Do by Sally Nicholls (7th September 2017) UKYA
This is about the suffragettes movement! It sounds incredible, and so feminist! I am so excited! And it features an f/f relationship!

A Change is Gonna Come Anthology (10th August 2017) UKYA
I can't tell you how excited I am for this book! It's just so important, and I am over the moon that Stripes Books helping support BAME authors and get their stories published. This is such a needed book, and I am so looking forward to reading!

Editing Emma by Chloe Seager (10th August 2017) 2017 UKYA Debut
This sounds like a really funny story! About a girl who decides to make positive changes in her life after she splits up with her boyfriend, and blog about them - but things don't always go wuite right. Looking forward to it.

The Court of Broken Knives by Anna Smith Spark (29th June 2017)
Another high fantasy! And it sounds so good! A group of people who go against their own decadent empire to try and prevent war - plus one in their midst who is trying to escape his past, but heading to their terrible destiny. I am so intrigued!

Bone by Yrsa Daley-Ward (26th September 2017)
I "bought" this as an eBook freebie a while back, but now it's being traditionally published as an expanded version. Really looking forward to reading this book of poetry!

The Love Letters of Abelard and Lily by Laura Creedle (26th December 2017)
This sounds so awesome! A love story between two neurodivergent teens; Lily who has ADHD, and Abelard, who has Asperger's. I am so looking forward to this, it sounds so cute and funny!

The Taste of Blue Light by Lydia Ruffles (7th September 2017) 2017 UKYA Debut
Oh my god, this book sounds really mysterious and dark! I feel it might be a difficult read, but it does sound really good! And it deals with mental illness and synesthaesia! I am so excited! (Not pictures as jacket art is not final.)

I did so well this month! I managed to read 13 books, which is ridiculous. Two of those were poetry books that I read in around an hour, but still, eleven books in a month is more than I can normally read. I'm normally lucky if I can manage eight, so this is pretty awesome. And almost all the books read were for the Ramadan Readathon!