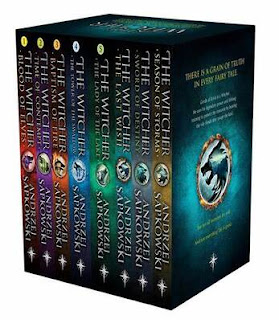 In this article series I'm calling "Fiction Series So Big, They Cross Multimedia Platforms", I plan to explore supernatural fiction series that sometimes had their beginnings as books but branched out into other types of mediums, like videogames, movies/TV series, board/card/role-playing games, and music. In each individual article that I hope will introduce entertainment connoisseurs to some incredible fiction or components of similar themed stories they might have otherwise missed, I'll discuss the origins of the series elements as well as my individual experience with the various types of media, which will be presented as a kind of review of the series. Let's start with a particular favorite of mine: Polish bestselling author Andrzej Sapkowski's The Witcher Series.

In Poland, The Witcher Series has a cult following and is so popular, a garden square in the author's hometown was renamed Witcher Square and a mural (the largest in Poland!) of the main character, Geralt, was painted on a local skyscraper. Americans didn't get translations of the book series for 17 years after the first story was published in Poland (and a couple of them still remain untranslated). The popularity of the videogames no doubt gave rise to interest in the books, which in turn incited the TV series that's become a favorite among fans of the supernatural.

Sapkowski's The Witcher book series has everything a lover of the supernatural could want with the cool twist of a "genetically engineered" hero designed to hunt monsters of lore using melee combat, alchemical potions and decoctions that would be poison to anyone without the witcher mutagen, and some magical abilities called signs. Geralt of Rivia is one of several other Witchers. In the past, the word "witcher" translated from the Polish was "hexer" or "spellmaker". Witchers are a dying breed, to be sure, in this series, and they're frequently aided by sorceresses like Yennefer of Vengerberg and Triss Merigold (male witches also exist in this world). Bards are popular in this world as well, whether a help or hindrance, especially Geralt's best friend, Dandelion (or Jaskier in Polish, which is what he's called in the Netflix series to much confusion for those who have read the English translated books or played the games).

The series is set on an unnamed continent settled thousands of years earlier by elves who came from overseas. War broke out between the elves and the dwarves who dwelled on the continent. Other beings existing at that time are gnomes, halflings, and dryads. Humans arrived after this time (500 years before the events of the series) and dominated all other races. Humans war amongst themselves as well. Like the author, the main character despises politics and tries to remain neutral, not always successfully. After a magical event called the Conjunction of the Spheres, werewolves, vampires, and a whole host of mystical creatures (taken from existing lore as well as unique creatures invented by the author, or hybrids thereof) spilled onto the continent.

Previously a traveling fur salesman with a degree in economics and a lover of fantasy, the Polish author wrote a short story called "The Witcher" that he entered in a competition held by a Polish sci-fi and fantasy magazine his son liked. Though he waited a year for the results (taking the 3rd place prize), readers of the magazine spurred the author to write more short stories with their approval. Positive reception quickly led him to undertaking a fantasy saga complete with novels. The Witcher Series was published in Poland between 1990 and 2013 while the first wasn't released until 2007 in the USA. Spin-offs include stories (written by other writers) set in the world of The Witcher featuring its characters. Comic books of The Witcher were published from 1993 to 2014.

Early screen adaptations were an overseas 2001 film and a 2002 TV series (titled The Hexer). Netflix adapted the series to television in 2019 along with an animated film in 2021 and a live-action prequel series is also in the works.

The first Witcher videogame was released in 2007, the second in 2011; and the third and final of the trilogy, in 2015. The games, particularly the latter, are bestsellers and have received countless awards. A remake of the first game is in the works, along with a second trilogy.

Soundtracks for the videogames contain breathtakingly beautiful music. A rock opera and a musical based on the series were produced by a Russian symphonic rock band between 2009 and 2012.

A Review of the Various Medium Components Available

I became intrigued with the Witcher Series when I watched my son playing The Witcher 3: Wild Hunt. I bought myself a copy, and my fascination with the series became absolute. I've played it countless times, many times a year, and the Blood and Wine DLC is some of the best bonus game material I've ever encountered. Every award this game won was well-deserved. This game is open-world and non-linear (you can do the quests in any order, for the most part), and much of the outcome is directly based on choices the player makes throughout, which is my favorite kind. As a gamer, I'm also a completionist, so I tend to do nearly every quest available (at least the first time), giving me a good two hundred hours of gameplay with this one. For the similarly obsessive type, I have an alphabetized, complete quest checklist uploaded here:  https://karenwiesner.weebly.com/uploads/2/3/5/5/23554234/witcher3questskarenwiesner.pdf.

After I played The Witcher 3 (and prior to playing The Witcher 2, which I'll talk about soon), I bought all Sapkowski's Witcher books and read them compulsively, more than once. They're phenomenal. Truly, some of the best books I've ever read. Below, you'll see the titles available in The Witcher Series (presented in chronological order--as they should be read--rather than in publication order):

Next, I played The Witcher 2: Assassins of Kings. The gameplay is a bit trickier than 3, requiring the player to be prepared and anticipate monster attacks in advance with oils for the sword and potions designed to aid defense and attack (death otherwise, meaning multiple saves are necessary in case you die and need to reload to a previous save state). I'm so glad they changed this in the third game! Witcher 2 also has the unfortunate annoyance of forcing the player to (somehow) know the exact order each quest must be played in order to avoid missing out on anything. I designed my own "ideal order of quests" checklist to ensure I don't miss anything important in the 25 hours plus of gameplay this installment boasts. Gamer completionists can find my fairly thorough console version walkthrough here: https://karenwiesner.weebly.com/uploads/2/3/5/5/23554234/witcher2walkthroughkarenwiesner.pdf.

I enjoy this game immensely, though not quite as much as The Witcher 3, in part because it's a hybrid between a linear and a non-linear game. You're forced to complete certain of the quests (i.e., main quests) at a certain time, usually advancing you to another location in the game. Once those major quests are completed in the order they're required, you can settle in for a bit and complete location questions in a more non-linear manner. Again, the player's ongoing decisions affect the outcome of the storyline.

I do own the videogame The Witcher 1 on Steam and computer disk. Though it was supposed to be released on console back in the day, it ended up available only on PC. I find it much harder to play anything but point and click games, like Nancy Drew, on PC. A complicated combat game like The Witcher works so much better, in my opinion, using a game controller instead of a keyboard. In any case, I'm hopeful I will get to play the remake of The Witcher 1 in the coming years, if the promise of it comes to fruition--and that it's available on PC andconsoles at the time of release.

Another media component of the videogames for this series are game soundtracks. I fell in love with the incredible soundtracks from each of the games, particularly the one for The Witcher 2. The gorgeous compositions created for the games have carried me through endless hours of writing sessions. Check them out here:

As if all this wasn't enough to embrace concerning a series with so many multimedia components, I love the mini-games that are played within each of the videogames. Specifically, Gwent in The Witcher 3 is a favorite card game of mine. I own all the physical decks along with an authentic game mat. I also enjoy Kings Dice from The Witcher 2. I've heard that in The Witcher 1, the player has the option of collecting "naughty" playing cards that are somehow related to Geralt's many sexual conquests. He must have a huge deck, if it's based on that, lol. This is one amorous hero, and the ladies (regardless of their race) love him.

I was thrilled when I heard about the Netflix adaptation of The Witcher Series, but I've found the results mixed, thus far. First, I strongly question the choices for some of the actors in the show, though they're growing on me, despite my qualms, a bit more after two seasons. Also, the first season whipsaws through time shifts so even a veteran reader of the books could easily become confused. The second season changes the series radically from the books with a new vision. I do admit, though, if I didn't consider the books canon, I might like the series more than I currently do. Those unhindered by the books will probably love the TV series.

Whether you're a supernatural book reader, gamer, lover of TV and movies and music, I highly recommend The Witcher Series in all its multimedia facets. They're worth whatever time and monetary investments you make on their behalf.

In the future, in random months between other topics, I plan to cover the following fiction series so big, they cross multimedia platforms: Dragon Age, Mass Effect, as well as a feature of RA Salvatore's multiplatform fantasy, among others to be announced.

Karen Wiesner is an award-winning, multi-genre author of over 150+ titles and 16 series. Visit her here: