This is the fourth of eight posts focusing on my Woodcutter's Grim Series and the stories behind classic fairy tales. 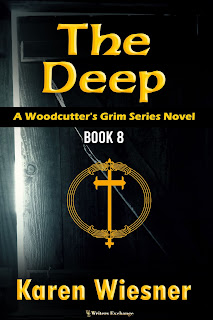 ** Very loosely based on “Metamorphoses: The Story of Pygmalion and the Statue” by Ovid. Cheyenne Welsh can't forget her past and the disappearance of her younger sister. When she returns to Woodcutter's Grim to sell the family property she grew up on, she's confronted with all the nightmare-realities of her childhood, still alive and well, still right where she left them--down in the darkness the Deep dwells inside. Her home... **

All of the novellas in the Woodcutter’s Grim Series thus far had been loosely based on popular, traditional fairy or folk tales, myths, fables, parables, nursery rhymes, poems, or some other literature. When I told my son I wouldn’t be following that theme for THE DEEP or any other Woodcutter’s Grim Series novels, he promptly insisted I was cheating and changing the rules midgame. I thought long and hard about that and ultimately worked like mad, pouring over all of the above to find something appropriate. I finally chose a loose interpretation of Metamorphoses: The Story of Pygmalion and the Statue by Ovid. Now I can’t imagine the story would have worked—or at least wouldn’t have been as effective—if I hadn’t followed my son’s advice.

The heroine’s father in THE DEEP had been introduced at the beginning of the Shaussegeny miniseries (WOODCUTTER'S GRIM SERIES, Volume II), so I was able to expand on his character as a professor of demon lore and introduce his penchant for fetish statues. If you’ve ever seen one and you know its purpose, you realize this is creepy stuff.

The title came about for the fetish statue that I created in the story, which has a name, Die diep (African for "The Deep"), and that statue has had a long, bloody, chilling history.

Writing this story gave me no end of trouble, requiring multiple revisions and overhauls, setting the book aside to brainstorm on ways to fix it, getting a critique partner involved so I could see what I was doing wrong… Well, eventually I did get the story to work.

The story behind Ovid's "Pygmalion and the Statue" was apparently inspired by the famous sculptor Praxiteles who created a statue modeled after his lover, a famous courtesan he'd seen rising naked from the sea like the goddess. He duly fell in love…or lust…or worship or whatever, lol. https://marcbarham.medium.com/pygmalion-and-galatea-the-metamorphosis-of-a-metamorphosis-myth-c8b93958f8e0

Reviews and Honors for THE DEEP:

I've always found African death masks and some of other tribal pieces, like fetishes statues, frightening. How about you? Leave a comment to tell me about it!