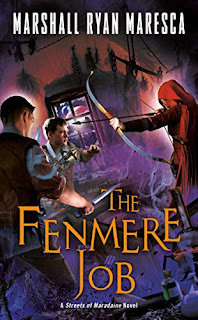 Reviews haven't been Indexed yet, and I often discuss other titles within posts about writing techniques illustrated by the novel.

This time, I'm looking at the Plot Structure of a Series of Series - intricate woven and braided plots spreading across different groups of Characters facing different challenges in different parts of one City - pretty much at the same time.

Maresca has created a World, yes, but so far he has only shown us one City - a big trading center sprawling across a navigable River.

Other "countries" trade through this City which is divided into "neighborhoods" some of which are controlled by organized Crime gangs or syndicates, or Mob Bosses.  An elaborate chain of command structure connects the Mob Boss with the street urchin.

All of this City has a feudal structure government tempered by an elected legislative body.

It is a rich, deep, broad and even sometimes plausible World, and the various Characters (laudable and deplorable both) would indeed be the sort of people who would be shaped by such a world.

One of the four series set in this City -- The Streets of Maradaine Novel -- is The Fenmere Job.  Fenmere is a district, and readers of previous novels in the other series (trilogies, to date, but that could expand as all the Characters are worth their own novels) will immediately recognize the word FENMERE and grab the book.

It's worth grabbing, too.

Keep in mind, these novels are not ROMANCE GENRE, per se, but they are good examples of character-driven-plotting.  More than that, they are grand examples of World Building.

In THE FENMERE JOB, the envelope plot connecting all 4 trilogies, begins to come together.  Two Heroes, male and female, fighting the drug traffickers independently finally meet.

And their destinies seem to begin to intertwine.  The male hero is about to graduate from University with a degree in Magic, and the female is beginning first year after a crash course in making up the basics of education.  She has been a street urchin, rose to command a group of urchins, and become semi-adopted into a group of families connected to the Constabulary.

Yes, it is all very British flavored.  But also the World Building takes us to some vaguely alternate Earth that developed differently.  There is little clue as to where and when this Setting exists, which in my mind makes it Fantasy, but there are broad hints it is connected to our mundane here-and-now world.  The characters in the story don't seem to know that.

Magic, per se, doesn't make a world into a Fantasy Genre setting, for me. To get to Fantasy, the fictional world has to have no apparent connection to here-and-now.

In 2020, that kind of "elsewhere/when" entertainment is mentally therapeutic!

I have mentioned other novels in this series:

https://aliendjinnromances.blogspot.com/2019/06/reviews-46-police-family-love-by.html - which is actually titled Reviews 47 which is correct.

I have read all the other books in this series, and look forward to more.

Yes, I love series, but only if they hang together, and piece by piece paint a coherent big picture that wouldn't fit into a single volume.

I much prefer single POV novels, but when it comes to a duel of wits, or a Romance fabricating itself before our eyes, I'll happily go for dual point of view.

Maresca makes the focus character of each novel the character whose story is being told, which gives the sprawling vision a coherence, a sense of a Big Picture emerging.

Fighting drug traffickers is, I think, a device to generate fight-scenes (most of which I can do without, but I love the ones using magical implements).

Many of Maresca's magic tricks (like a rope that lasso's people, a sword, illusions) are pretty standard fare in fantasy novels, not original or thought-provoking.  This keeps the magic from overshadowing the real substance, the original work done on the World Building.

These people belong in this fantasy world.

The point that I see emerging is a discussion of Nature vs Nurture.  All these Characters are human, but of different cultures and races.  They are denizens of different levels of their City's society, and in this novel we begin to see a second Character change social levels.  Or maybe a third, if you count Lady Henterman.

And we see these two socially mobile Characters teaming up in a way that could indelibly stamp their World with a new way to regard people.