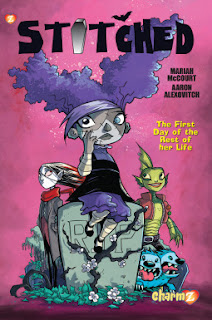 Terror Dome: A Short Story (Part 4)
Hampton Cannabis Expo Founder Gary Bi…
Vehicle Preparedness – Preparing for …
6 things you should not be wearing in…
22 Sexy White Boy Haircuts: Hot Style…
Crimson Volania Mulch has a problem; she just woke up in a crypt and, besides her name, has no idea of who, where, or what she is. Welcome to the Cemetery of Assumptions, a vast landscape of stones, mausoleums, and secrets. Home to monsters and mayhem, it may also hold the answers to her unknown parentage.
Crimson is a resourceful patchwork girl and determined to find them. Along the way, she meets the mysterious Wisteria, who has a tendency to change and a witch named Parameter whose spells tend to go awry. And two boys, Simon and Quinton, who make her feel something besides lost and confused. She must battle ghosts, zombies, and monsters in order to learn where she came from and who her real "mother" is. But will she do it alone, or will she have help from her new friends and unexpected crushes?
Let's meet the characters!

Crimson Volania Mulch
Brand-new and brimming with curiosity, Crimson is a mystery even to herself. Made up of different girls, she doesn't know who she was, so how can she decide who she should be? Waking up in Assumption Cemetery is only the beginning, but she knows at least four things already: she has great hair, she loves animals, vampire boys are seriously pretty, and she definitely needs to fin her selves. Whoever they were.

Wisteria Smials
A shy werewolf who paints, Wisteria is a loyal friend with a soft, kind heart...but watch out. If you threaten those close to her or waste time bickering, Wisteria's inner wolf will come out. And it is not to be messed with. No one knows where she lives, which is a bit curious, even for Assumption. 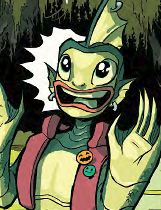 Simon
A swamp boy with a bioluminescent personality, Simon likes snacks, swimming, and Crimson. A lot. He lives in Assumption's swampy bayou and has no trouble saying what he thinks. He's determined and a bit overly confident, but he'll always be there for a friend.

Quinton
Assumption's resident vampire boy, he's pretty, he's properly brooding, and he's more than a little stuck up. He's older that even he can remember and doesn't let much touch his undead heart. Until he meets Crimson and has to face a past he's not quite ready to deal with. 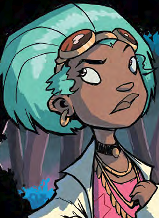 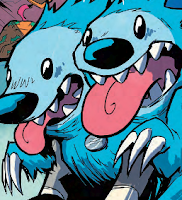 Crust
half badger, half hedgehog, all cute. Crust is the perfect pet for Crimson and the most adorable undead companion ever made. Was she a gift from Crimson's mom? Does she like cupcakes? All she knows is that she loves Crimson and will follow her anywhere.

Review
This is the most adorable graphic novel I've ever seen! And it was its colorful cover that drew me into reading what it was about. Although middle-grade is not my usual choice, I though this looked like a fresh and cute Story. It totally was!
In terms of story, and although I understand this is targeted towards a younger audience, I felt it lacked something. It felt really simple. I don't know why authors underestimate children. They smarter than we think. It's okay to throw in some more mature content, they will understand it. Other than that, I truly enjoyed the story. I liked how this is, in some way, a story of diversity and acceptance. And I'm sure those topics will be further addressed in the next issues.
The artwork. Oh, dear. It's fantastic. I love the brightness of it all even when we're surrounded by a creepy environment. The characters' colors complement their personalities perfectly. My only complaint is that some pages were a little too packed and may confuse the readers.
Overall, I found this to be a fantastic, fun and Cute Story with just enough action. Both adults and children will enjoy this.
Rating

4 out of 5 stars
Rating System
Do you enjoy middle-grade? Would you like to have a half badger/half hedgehog pet? Let me know!