Hello, dear readers. Today on the blog I am hosting the wonderful Eric Schumacher with a fascinating guest post as part of his War King Blog Tour! We also have a chance for you to win an eBook!

Christianity, Hakon and the Viking Age

A blogger recently asked me about the role of faith in my novels. It's an interesting question, and one I wanted to give some attention to here.

To answer the question simply and directly, faith plays a major role in my novels, not because I am particularly religious, but because in the Viking Age, religion, faith and life were entwined.

In Germanic and Scandinavian culture, gods and spirits played an integral part of life. They were everywhere. They were the reason for the landscape and geography. They controlled the weather, the seas, the crops. Appeasing or pleasing those gods and spirits was a daily occurrence. Though it took a vastly different form, it could also be said that Christianity and “God” were ever-present in the mind of those living in Christianized parts of the world.

The period after the fall of the Roman Empire and up through the Middle Ages was a time of religious change and upheaval. By the beginning of the fourth century, persecution of Christians had ended in the Roman Empire, and support for the religion was spreading. There was a Christian presence in Ireland by the year 400, and Clovis I, ruler of the Franks, was baptized on Christmas Day, 496. However, Christianity's spread was not without difficulties. The old gods were still a strong force in parts of England, Saxony, Scandinavian and other regions; while Islam was sweeping into the fallen Roman empire from the east.

In 793, the Vikings arrive in dramatic fashion. "In this year dire forewarnings came over the land of the Northumbrians, and miserably terrified the people; these were extraordinary whirlwinds and lightenings, and fiery dragons were seen flying in the air. A great famine soon followed these omens; and soon after that, in the same year, the havoc of heathen men miserably destroyed God’s church on Lindisfarne. . .” (Anglo-Saxon Chronicle).

At first, the raiders targeted churches and monasteries, which were, for the most part, unprotected and rich in gold, silver, and slaves. It is not hard to see how the Christian priests, and through them, the people, must have thought the raiders who killed, pillaged and burned these centers of faith were godless men and (pun intended) hell bent on destroying the church. 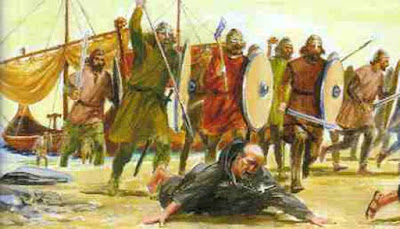 While the Vikings must have known of Christianity and heard of its spread, their attack on churches did not seem to be motivated by a desire to destroy the Christian faith. The raids seemed more practical than that. The churches and their unprotected wealth were easy prey. Moreover, there is evidence to suggest that the raiders were even willing to adopt the new faith if it could help them in some way, such as get them safely across an ocean, or earn them victory in battle, or, as with some of their leaders, earn them riches in land and gold through alliances.

Given all of this, to exclude faith from my novels would be to paint an inaccurate picture of the Viking Age. Only I took it a step further. I chose Hakon Haraldsson as my protagonist. Why? Because in many ways, Hakon is the embodiment of the religious struggles of the time. He is a boy raised in a heathen home until he was eight, then shipped off to the Christian court of Wessex to be fostered, then brought back to the North to fight his pagan brother alongside his pagan people for the High Seat of the land. Can religion, faith, and plot get any more entwined than that? Ok, maybe they can, but you get the point.

The tricky bit was determining just how religious to make Hakon, and what I eventually landed on was a character whose faith would evolve. In the first novel, God's Hammer, Hakon practices much of the teachings of modern Christianity, particularly “love thy brother” and "love thy enemy". In the Viking Age, there is no indication that kings adhered to this teaching, and plenty of evidence to suggest the opposite. Yet, Hakon was young and untested, so I chose to make him a naïve idealist driven by a singular mission to become the first Christian king of the North, a mission planted in his impressionable mind by his powerful foster father, King Athelstan. I did this because I wanted to pit Hakon against Erik and through that rivalry, point to the larger theme of good versus evil that was the backdrop of that time. 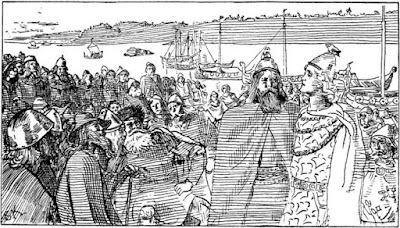 In Raven's Feast (the second novel), life’s harsh realities test Hakon spiritual resolve at every turn. Those tests leave him with a singular choice to make: stand fast in the face of the challenges or give into the demands of his people.

With War King, we see Hakon as a middle-aged man. Like a stone that has long been smoothed by the flow of water, so too has Hakon’s rough edges softened with the passage of time. But does he ultimately crack under the strain? You will need to read the novel to find out. It is 954 A.D. and a tempest is brewing in the North. Twenty summers before, Hakon Haraldsson wrested Norway’s throne from his murderous brother, Erik Bloodaxe, but he failed to rid himself of Erik’s family. Now the sons of Erik have come to reclaim Erik’s realm and avenge the wrong done to their father and their kin.

They do not come alone. With them marches an army of sword-Danes sent by the Danish King, Harald Bluetooth, whose desire to expand his realm is as powerful as the lust for vengeance that pulses in the veins of Erik’s brood.

Like storm-driven waves, the opposing forces collide in War King, the action-packed sequel to God’s Hammer and Raven’s Feast.

Praise for the Hakon's Saga

"I was swept up in the action and enthralled by the descriptions of Hakon’s struggle." -Roundtable Reviews

"I highly recommend this historical fiction novel, both for its entertaining story and historical information." -Historical Fiction Review-

"A story of war, family, sacrifice, honor ... one that keeps your blood pumping and your fingers turning pages rapidly. I can't wait to dig into the next." -Goodreads Review

Eric Schumacher was born in Los Angeles in 1968 and currently resides in Santa Barbara, CA with his wife, two children and dog. He is the author of two historical fiction novels, God’s Hammer and its sequel, Raven’s Feast. Both tell the story of the first Christian king of Viking Norway, Hakon Haraldsson, and his struggles to gain and hold the High Seat of his realm.

More information on Eric and his Hakon Sagas can be found on his website. You can also connect with Eric on Twitter, Facebook, Goodreads, and AuthorsDB.

Wednesday, October 17
Excerpt at Passages to the Past

Monday, October 22
Guest Post at Passages to the Past

Thursday, October 25
Interview at Maiden of the Pages

During the Blog Tour we will be giving away ten copies of War King (ebooks and paperbacks)! To enter, please enter via the Gleam form below.

– Giveaway ends at 11:59pm EST on November 6th. You must be 18 or older to enter.
– Giveaway is open to readers in North America and Western Europe.
– Only one entry per household.
– All giveaway entrants agree to be honest and not cheat the systems; any suspect of fraud is decided upon by blog/site owner and the sponsor, and entrants may be disqualified at our discretion.
– Winner has 48 hours to claim prize or new winner is chosen