IS SITTING DOWN THE NEW STANDING UP? 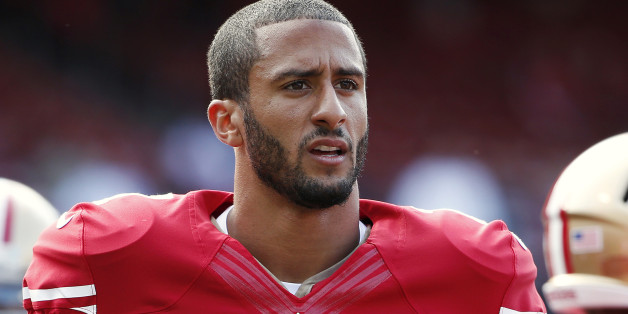 I understand white America's need to assassinate Colin Kaepernick's character calling him a unappreciative, unpatriotic spoiled millionaire athlete. Some are even showing pictures of U.S. Vets with no legs standing up for the national anthem. I understand because i realize that you don"t know anything about real American history.  You Don't know anything about Frances Scott Key the author of the Star Spangled Banner...You Don"t know anything about the early Europeans. You don"t know that England sent its prisoners and insane asylum patients to the new world as the first Americans. (Read a book by Anthony Vaver called  Bound with an Iron Chain) You Don"t know anything about what really happened at thanksgiving. How the pilgrims MURDERED AND RAPED  the same Indians that helped them survive the brutal winters. If you knew real American history you would respect this man's decision not to stand....This country's premise was built on the fact that we could disagree on certain things but it's our right and privilege to express our own opinion's whether popular or not....Muhammad Ali took a stand back in the early 60's and was publicly vilified for not wanting to fight in the Vietnam war..Now as years go by he was respected and honored for his brave decision..THIS COUNTRY"S GREATNESS LIES IN THE FACT THAT SOMEONE CAN SAY AND THINK WHATEVER THEY WANT...ISN'T IT ????   PLEASE REMEMBER THAT THIS COUNTRY WAS FOUGHT OVER WITH THE BRITISH TO FREE PEOPLE IN AN OPPRESSIVE SYSTEM. But this country's history was written by whites who knew of their horrific crimes but decided to change and omit certain facts to make themselves look and feel good..Even FRANCIS SCOTT KEY the author of the national anthem is embedded in racism..TIME FOR A REAL HISTORY LESSON !!....Frances Scott key was a prosecutor in DC and a lieutenant in the army who thought Blacks were mentally inferior to whites. But he found out the hard way that was not the case. He ran into the Colonial Marines a battalion of runaway slaves who joined the British army in exchange for their FREEDOM ....August 24th 1815 at the battle of Bladensburg , Key and his battalion were beaten to a pulp and forced to run and hide. Key was pissed to say the least at the fact he got his ass kicked by black soldiers....Sept. 13th 1815 he observed the battle of Ft McHenry in Baltimore from a ship. America fought hard in that battle and this inspired Key to write the star spangled banner. Its funny to me that no one seems to remember the third stanza he wrote that has been omitted..Key wrote in so many words that the blood of the slaves on the battlefield will wash away the pollution of the British invaders. Key wrote this still upset he got his ass kicked by a black battalion a few weeks earlier..So this anthem was really a diss track to blacks who had the audacity to fight for their freedom.....If you want more history on the on the star spangled banner there is a 15 minute documentary by  Morgan State Students.(google it )........Colin Kapernick decision is HIS decision. He will probably lose his job with the NFL over time but he stood up for what he thought was right and that's to sit during the national anthem. His decision has unleashed more racist rhetoric like blacks are supposed to be grateful to be here. Its always if you are not appreciative ....'Go back to Africa Nigger',..... But this is our country also , built on the backs of our ancestors for free (REMEMBER?)   If you are white and you are disgusted with Kaepernick and you hate Obama ,despise Black Lives Matter, then I would say...OK I UNDERSTAND ....  DON'T TAKE THIS SHIT FROM THESE DISRESPECTFUL NIGGERS....MOVE BACK TO EUROPE TO THE PLACE YOU ARE FROM..PLEASE MOVE BACK SO YOU DON'T HAVE TO  BE AROUND THESE UNGRATEFUL NIGGERS. ( THAT'S WHAT IT SOUNDS LIKE WHEN YOU TELL US TO GO BACK TO AFRICA )....Always remember the reason you fought the English.  THE RIGHT OF FREEDOM OF SPEECH, RELIGION AND THE RIGHT TO PEACEFULLY ASSEMBLE.    Colin Kapernick is not disrespecting the U.S. military if anything he is saluting them for fighting for HIS RIGHT NOT TO STAND....Being a former U.S. Air Force Vet I am honored by his decision . So if you never served or you were not born here or you know little about American history you should do your research before you speak to make sure you are not speaking out of ignorance..You also have the RIGHT NOT TO LIKE what Kaepernick did....... BUT HE HAS THE RIGHT TO DO IT....IS THE CONSTITUTION FOR EVERYONE ?  OR IS IT LIKE RAPPER ICE T ONCE SAID....YOU HAVE FREEDOM OF SPEECH BLACK MAN JUST WATCH WHAT YOU SAY !!!

IS SITTING DOWN THE NEW STANDING UP?