Trump: Michael Wolff book on administration is 'full of lies' 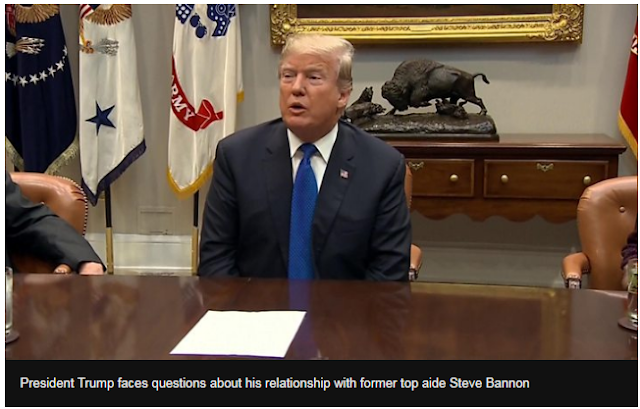 Donald Trump says a book containing damaging allegations about his administration is "full of lies".
The book cites former top aide Steve Bannon as describing a meeting with a group of Russians at which Mr Trump's son was present as "treasonous".

What's in the book?

Mr Wolff's book makes many claims, including that:
The book is reportedly based on more than 200 interviews but some of the book's excerpts have already been criticised and questioned.
Still, even if only half of what the book contains is true, it paints a damning portrait of a paranoid president and a chaotic White House, BBC North America editor Jon Sopel says.
Mr Bannon also reportedly said, referring to a Trump Tower meeting between top campaign officials and Russia: "They're going to crack Don Junior like an egg on national TV."
The meeting, which involved Mr Trump's eldest child Donald Trump Jr, is being investigated by Special Counsel Robert Mueller as part of his inquiry into possible collusion between Trump campaign officials and Russia to win the election.
Mr Trump strongly denies any collusion took place.

What's been the reaction?

Mr Trump said he had not given Mr Wolff access to the White House nor spoken to him for the book, which he said was "full of lies, misrepresentations and sources that don't exist".
Skip Twitter post by @realDonaldTrump
Report
End of Twitter post by @realDonaldTrump
He had earlier said Mr Bannon - who was sacked in August - had "lost his mind" after losing his White House position. 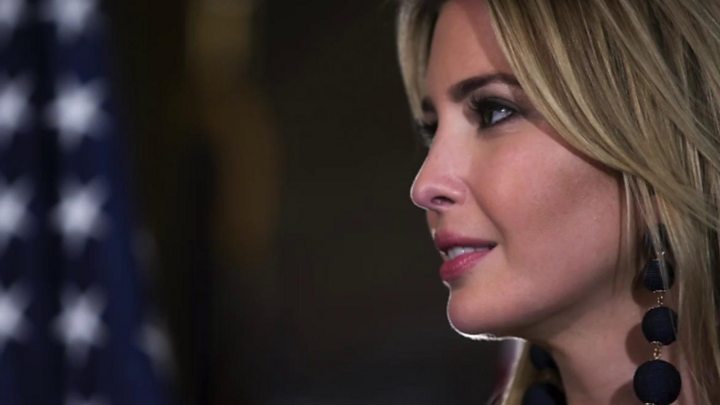 Media caption
Ivanka Trump allegedly struck a deal that she might run for president in the future
On his Breitbart radio show on Wednesday, Mr Bannon responded to the president's criticism by saying he was a "great man" and that he supported him "day in and day out".
After the president met Republican senators on Thursday, a reporter asked Mr Trump if his former strategist had betrayed him.
He responded: "I don't know, he called me a great man last night so he obviously changed his tune pretty quick."
Mr Bannon has also been criticised by another former associate, Republican party donor Rebekah Mercer - who has also invested in Breitbart, where Mr Bannon is chairman.
In other reaction:

What did Mr Trump's lawyers argue

The legal notice, which has been published by the Washington Post, demanded that Mr Wolff and the book's publisher "immediately cease and desist from any further publication, release or dissemination of the book".
It accused Wolff of making "numerous false and/or baseless statements" about Mr Trump and said lawyers were considering pursuing libel charges.
Attorney Charles J Harder also sent a cease-and-desist letter to Mr Bannon on Wednesday, saying he had violated a non-disclosure agreement.
The book was due out on Tuesday but publication was advanced following the legal moves.

You can't buy this kind of publicity

Analysis by Anthony Zurcher, BBC News North America reporter
Donald Trump might want to familiarise himself with the so-called Streisand Effect. The lesson, most prominently learned by singer Barbra Streisand when she tried to quash photographs of her home that appeared on an obscure website, is that the more you fight against undesirable news, the more you call attention to it.
Thanks to his lawyer's "cease and desist" letter, Mr Trump is giving Michael Wolff and his explosive book the kind of massive publicity boost money alone can't buy.
The highly critical allegations are leading every news programme and newspaper front page (and burying the latest round of glowing US economic news that might otherwise garner attention).
Threatening lawsuits is a common tactic for Mr Trump, dating back to his days as a New York real estate mogul. Very seldom does he follow up with actual court action. In this case, such a move would be particularly risky.
To meet the "actual malice" requirement of US libel law, the president would open himself up to investigation from opposing lawyers seeking to prove that Mr Wolff's allegations had substance - or, at the very least - that he had reason to believe they did.
Source: BBCNews

Trump: Michael Wolff book on administration is 'full of lies'