The first of more than 200 abducted Chibok schoolgirls to be rescued from Boko Haram after two years in captivity in northeast Nigeria said on Tuesday that she just wants to go home. 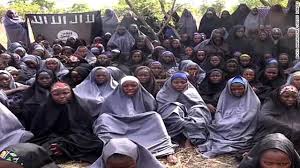 In her first interview, Amina Ali spoke to the Thomson Reuters Foundation in the capital of Abuja, where she and her baby daughter have been held by since her rescue in May for what the government has called a "restoration process".
Ali said was not sure whether she would return to education and that she did not know when she would be able to go home.
Here are 10 key facts about the Chibok schoolgirls and the Islamist militant group Boko Haram:
Since 2009, Boko Haram has waged an insurgency to carve out an Islamic state in northeast Nigeria that has killed some 15,000 people and displaced more than two million.
The most high-profile attack took place on April 14, 2014, when Boko Haram kidnapped 276 school girls, from a secondary school in Chibok in northeast Borno state. About 50 of the girls escaped in the initial melee but 219 were captured.
Nigeria's government and military, then under the command of former president Goodluck Jonathan, faced heavy criticism for their handling of the incident, with towns and cities across the nation witnessing protests.
The kidnappings prompted a strong social media reaction, with the phrase #bringbackourgirls tweeted around 3.3 million times by mid-May 2014, and the campaign which followed backed by U.S. First Lady Michelle Obama.
Hope for the girls was briefly raised in April 2015 when the Nigerian military announced it had rescued 200 girls and 93 women from the Sambisa forest, northeast of Chibok. It was later revealed that the Chibok girls were not among them.
One of the Chibok girls, Amina Ali, was rescued in May. Held for months by the Nigerian government, she told her mother that the girls were starved and resorted to eating raw maize, and that some had died in captivity, suffered broken legs or gone deaf after being too close to explosions.
Boko Haram on Sunday published a video apparently showing recent footage of dozens of the Chibok girls, and a masked man saying some of their classmates had been killed in air strikes. In the video, unidentified bodies could be seen on the ground.
About 2,000 girls and boys have been kidnapped by Boko Haram since the beginning of 2014, according to Amnesty International, which says they are used as cooks, sex slaves, fighters and even suicide bombers.
Boko Haram used 44 children to carry out suicide attacks in West Africa last year, up from four in 2014, with some as young as eight, mostly girls, detonating bombs in schools and markets, according to the U.N. children's agency UNICEF.
Boko Haram, which last year pledged allegiance to Islamic State, controlled a swathe of land in northeast Nigeria, around the size of Belgium, at the start of 2015 but was pushed out by Nigerian and regional troops, which are now in a final push to defeat the militants.
(Writing By Kieran Guilbert, Editing by Katie Nguyen.; Please credit the Thomson Reuters Foundation, the charitable arm of Thomson Reuters, that covers humanitarian news, women's rights, trafficking, corruption and climate change. Visit news.trust.org)