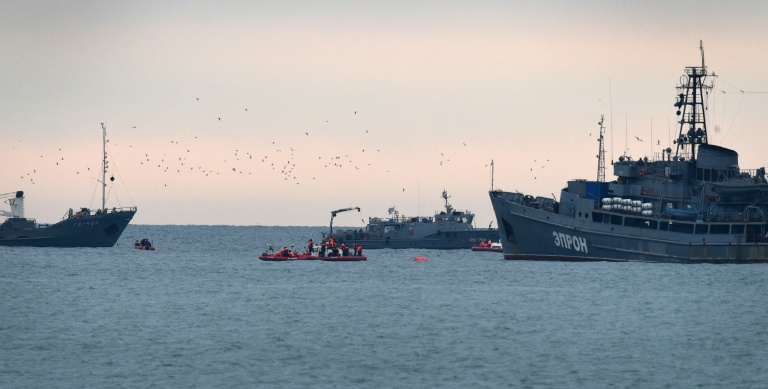 Rescue vessels search the Black Sea near Sochi after a military Plane crashed killing 92 people, including dozens of members of the Red Army Choir


Russian rescuers working round the clock have found the main black box from the Syria-bound military plane that crashed into the Black Sea with 92 people on board, authorities said.

The defence ministry said the box, which could provide vital clues as to why the Tu-154 jet crashed, was discovered early Tuesday only 1,600 metres from the shore and 17 metres under the surface and was in "satisfactory condition".

Investigators were also looking at a witness video of the abortive flight and the plane's plunge into the sea.

The Tu-154 jet, whose passengers included more than 60 members of the internationally renowned Red Army Choir, was heading to Russia's military airbase in Syria on Sunday when it went down off the coast of Sochi shortly after take-off from a refuelling stop at the airport. 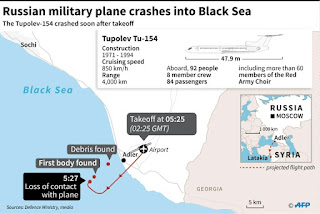 Investigators said they have sorted and documented thousands of passengers' personal items and identification documents, questioned locals and are checking the fuel equipment at the airport.

One witness "filmed the takeoff, flight and fall of the plane into the sea," the Investigative Committee said in a statement.

The discovery of the black box comes as searchers scramble to recover bodies and remaining debris from the aircraft in an operation involving divers, deepwater machines, helicopters and drones.

The defence ministry said that five plane fragments, including part of the fuselage and engine, were found overnight 30 metres (98 feet) underwater at around 1,700 metres from the shore.

Searchers later found an additional three fragments, including landing gear and a portion of the engine, the ministry said.

Russia's federal security service has said it is looking into four suspected causes of the crash, namely pilot error, technical failure, faulty fuel and an object in the engine. 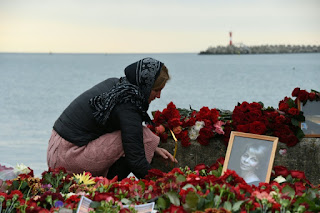 A woman lights a candle at a memorial to one of the victims, famous Russian charity activist and founder of the Voters' League Yelizaveta Glinka, on the shores of the Black Sea in Sochi

The defence ministry said a total of 12 bodies and 156 body fragments had been recovered from the sea since the crash, all of which are being sent to Moscow for DNA identification.

The Kommersant daily newspaper reported that investigators are relying on a witness statement by a coastguard member who saw the plane in its final moments descending towards the sea with its nose tilted sharply upward.

Authorities have not said how long it would take to decipher the black box.

The defence ministry also said the plane's fragments had dispersed over a 500-metre radius.

More than 3,500 people, 45 boats, 15 submersibles, 12 planes, five helicopters and several drones have been mobilised to aid in the rescue effort, officials said.

- Choir to be restored -

The Tu-154 jet went down on Sunday morning minutes after taking off at 5:25 am (0225 GMT) from Sochi's airport, where it had stopped to refuel after flying out from the Chkalovsky military aerodrome in the Moscow region. 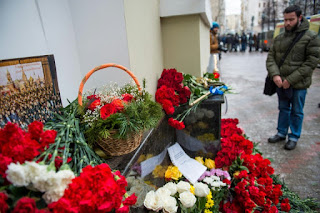 A man stands next to a memorial outside the home of the Alexandrov Ensemble (The Red Army Choir), in Moscow

Onboard were 64 members of the Alexandrov Ensemble -- the army's official musical group, also known as the Red Army Choir -- and their conductor Valery Khalilov.

The choir was set to perform for Russian troops at the Hmeimim airbase in Syria, which has been used to launch air strikes in support of Moscow's ally President Bashar al-Assad.

Defence minister Sergei Shoigu has pledged to restore the choir "in the nearest future."

Other passengers included military officers, journalists and popular charity worker Yelizaveta Glinka, affectionately known as "Doctor Liza", who was bringing medical supplies to a hospital in the coastal Syrian city of Latakia.

Russia observed a day of mourning Monday and Sochi's administration announced Tuesday that it is cancelling the New Year's Eve celebration on its main square due to the tragedy.

People have been bringing flowers to improvised memorials at the port in central Sochi and the city's airport, as well as to the Moscow headquarters of the Red Army Choir and the office of Fair Aid, the NGO that Glinka headed, which primarily worked with Moscow's homeless.

Tu-154 aircraft have been involved in a number of accidents in the past, including the April 2010 crash killing then-Polish president Lech Kaczynski and his delegation. They are no longer used by commercial airlines in Russia.

Asked whether all Tu-154 planes would be grounded, Kremlin spokesman Dmitry Peskov referred journalists to the transportation ministry, while Transport Minister Maksim Sokolov called the model "rather reliable".