June 7th 2006
View original
Intolerance is now a major issue and a topic for debate for people in India. Intolerance, basically meaning unwilling to accept views or beliefs differing own views, has gained attention all over the country.
It all started with the incident of mob lynching in Dadri, Uttar Pradesh. On september 28, a public announcement system of the temple was used to spread a rumour about a cow being killed by Mohammed Akhlaq. Following which,  people armed with sticks and bricks arrived at the 52 year old Mohammed Akhlaq Saifi's residence. The mob entered the house and found some meat in the refrigerator. They insisted that it was mutton but the mob refused to listen to them. The mob dragged them outside beat up Akhlaq and his son with sticks and bricks. They also attacked Akhlaq's mother and his wife. The local police was informed and investigation started. First the temple priest and then son of a local BJP leader were arrested for questioning. This incident sparked a sense of intolerance among the activists and many renowned personalities. 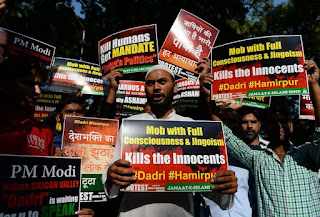 Another incident adding to the intolerance issue was the murder of Dr. M.M. Kalburgi. He was a renowned Kannada writer, scholar and rationalist. He had authored over a 100 books in kannada. He belonged the the Lingayat community propagated by Basavanna. Basavanna opposed religion, religious practises and brahminical rituals and so was he. He would often give speeches on such sensitive topics which sparked anger and criticism by a section of the society. He often criticised idol worship which which invited people pelting stones and bottles at his residence. A complain was filed against him few months back for the same issue. He continued to his thoughts not fearing the people. Few days back, two youths visited his residence as his students and shot him on his forehead twice. That lead to protests against the murder. 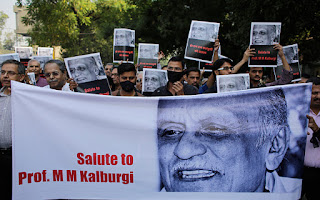 The above incident can be related to a murder in 2013 of Mr.Dabholkar, a rationalist and author. He was against superstition and black magic. He made several failed attempts to get the anti-superstition law enacted in the state of Maharashtra. He was the founder of Maharashtra Andhashradha Nirmoolan Samiti (MANS). MANS, under his supervision, drafted the Anti-jaadu tona bill. He was often threatened for his views since 1983. He was shot dead on 20th August by two youths near Omkareshwar temple, Pune.
The rising incidents of murders due to a difference of opinion and views has got the activists and socialists awaken. Unhappy with the government's response to rising intolerance, many writers, poets, authors and activists decided to take a stand against a rising issue. People decided on a all new way to protest against the intolerance. Mr.Uday Prakash, a Hindi writer was the first among them to return his award from Sahitya Akademi. He renounced his award to protest against the killing of Mr. M.M. Kalburgi. others who returned their awards were Nayantara Sahgal, a writer, My Ashok Vajpeyi, a poet, Ghulam Nabi Khayal, Gurbachan singh Bhullar and many more personalities. twelve filmmakers including Dibakar Banerjee and Anand Patwardhan returned their awards. Started with actual protest, the return of awards has become a way to come in the highlight and has increased due to political interests of some people.
Increased intolerance also invited comments from various film stars. Actor Shahrukh Khan joined the chorus of growing intolerance. He said, ''religious intolerance and not being secular is the worst thing you can do as a patriot''. Salman Khan had few points on the intolerance issue. He said that he doesn't believe in judging people on the basis of where they come or what their religion is.
Aamir Khan, another film star came into a controversy with his answer on growing intolerance at the RNG awards. He said that his wife fears the intolerance environment in the country and fears for their son and even asks to leave the country. Many people slammed this statement and asked him to leave the country as his wife suggested. His comments also invited criticism from his colleagues on social networking sites. A case was registered against him in Delhi by a short-film director and his posters were burned in several cities as a way of protest against his comments.
On the contrary, some celebs also feel that returning national awards is a gesture of disrespect towards oneself and the country. The debate still continues as on why is the environment in India growing intolerant and what are the causes. The people of the country has a major role to play in this issue. It all depends on how they react to a particular issue. By returning awards or by acting in such a way that the issue does not arise again in the future.