Tags: port special economic zone
September 14th 2015
View original
*As the author of this blog I disclose that I do hold  in my investment portfolio. 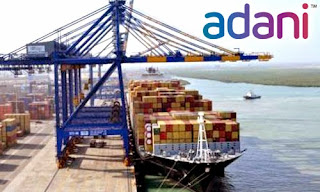 Scrip Code: 532921 / ADANIPORTS
CMP:  Rs. 325.00; Market Cap: Rs. 67,305.93 Cr; 52 Week High/Low: Rs. 357.95 / Rs. 244.10
Total Shares: 207,09,51,761 shares; Promoters : 116,51,78,474 shares –56.26 %; Total Public holding : 90,57,73,287 shares – 43.74 %; Book Value: Rs. 55.63; Face Value: Rs. 2.00; EPS: Rs. 10.54; Dividend: 50.00 % ; P/E: 30.83 times; Ind. P/E: 29.95; EV/EBITDA: 17.86.
Total Debt: Rs. 15,155.33 Cr; Enterprise Value: Rs. 81,978.58 Cr.
Adani Port and Special Economic Zone LTD: The Company was incorporated in 1998 and is based in Ahmedabad, Gujarat- India. It was earlier known as Gujarat Adani Port Limited and was set up as a Special Economic Zone at Mundra. Gujarat Adani Port Ltd was then merged with Mundra Special Economic Zone Ltd in April 2006 and the company was renamed as Mundra Port and Special Economic Zone Limited, to reflect the nature of business. In January 2012 the company board renamed the company as Adani Port and Special Economic Zone LTD. Adani Port and Special Economic Zone Ltd is a subsidiary of Adani Enterprises Limited from September 2010. The company engages in the development, operations and maintenance of multi product special economic zone and related infrastructure in India. The came with an IPO on November, 1st 2007 offering 4,02,50,000 equity shares of Rs. 10 each for Rs. 440 per share raising Rs. 1,771.00 Cr. The object of the issue were to achieve the benefits of listing on stock exchanges & to raise capital for construction and development of basic infrastructure and allied facilities in the proposed SEZ at Mundra; to utilize the funds for construction and development of a terminal for Coal and other Cargo at the Mundra Port; for contributing towards investment in Adani Petronet (Dahej) Port Pvt Ltd, Adani Logistics Ltd and Inland Container Pvt Ltd. The shares got listed on November 27, 2007 at Rs. 770 a share. The company declared split in face value of its shares from Rs. 10 to Rs. 2 on 17 May 2010. The company through its Mundra port located in Gulf of Kutch, India provides cargo handling & other value-added port related services. It operates port infrastructure facilities of bulk cargo at Dahej, Gujarat, handles bulk, liquid and containerized cargo, single point mooring, storage, and transportation of cargo by road, rail and pipeline. Adani Ports and Special Economic Zone Limited, together with its subsidiaries, develops and operates ports and port based infrastructure in India. The company operates a port at Mundra, Gujarat; a dry bulk terminal located in Dahej, Gujarat; a bulk and container handling terminal at the port of Hazira, Gujarat; and coal handling terminals at the port of Mormugao, Goa and Visakhapatnam in Andhra Pradesh. It also operates 4 bulk terminals with 15 berths to handle dry and liquid bulk cargo, 3 container terminals with 6 berths, and 2 offshore single point mooring facilities for handling crude cargo at the port of Mundra; a dry bulk cargo terminal with 2 berths at the port of Dahej; and 1 bulk terminal with 3 berths to handle dry and liquid bulk cargo, and 1 container terminal with 2 berths to handle container cargo at the port of Hazira. In addition, the company is developing a bulk terminal located in Kandla, Gujarat; a rail corridor; and road and highway projects. Further, it offers port services, including marine, handling intra-port transport, storage, other value-added, and evacuation services for terminal operators, shipping lines and agents, exporters, importers, and other port users; and infrastructure leasing and logistics services at the Mundra Port through its surrounding infrastructure. Additionally, the company provides multi-modal cargo storage-cum-logistics services; and non-scheduled (passenger) services through its aircrafts. The company also operates container trains on specific railways routes; and provides multi-model cargo storage and logistics services through the development of inland container depots at various locations. It operates a fleet of approximately 2,517 vessels. In addition, APSEZL provides nonscheduled (passenger) services through its aircrafts. Adani Port and SEZ ltd is compared with Avia Solutions Group Ab, DP World of UAE, Gemadept Corp, Kuwait and Gulf Link Transport Company, Luka Rijeka d.d, Wesco Aircraft Holdings Inc, Isewan Terminal Services Co., Ltd of Japan, Azuma Shipping Co., Ltd of Japan, Meiko Trans Co., Ltd of Japan, Rizhao Port Co. ltd; Shenzhen Chiwan Wharf Holdings Ltd.
Investment Rationale: 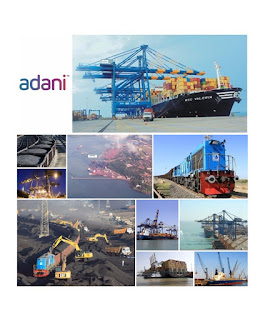 Adani Ports and SEZ is a part of global Adani Group, founded in 1988, and is India’s leading business houses with revenue of over $8.7 billion. Group’s logistics division denotes a large network of ports, Special Economic Zone (SEZ) and multimodal logistics like railways and ships. Adani owns and operates three ports – Mundra, Dahej and Hazira and now Dhamra in India. The Mundra Port, which is the largest port in India, benefits from deep draft, first-class infrastructure and SEZ status. Adani is also developing ports at Mormugao and Kandla in India. India has a coastline of 7,517 kilometers (excluding the Andaman and Nicobar Islands), with a port industry that has grown dramatically. India at present has 13 Major Ports and 200 Non-major Ports with total cargo traffic tonnage handled of about 976 million metric tonnes for the fiscal year 2013 and is expected to reach 1,758 MMT by 2017. The handling capacity of the major ports in India is sufficient to match with the trade demands. The capacity of all major ports as on March 31, 2015 was 800.52 MMT against cargo traffic of 555.54 MMT handled in 2013-14. Thus the capacity utilisation is around 70 %, and as per internationally accepted norms the gap between the traffic and the capacity is usually around 30 %. The Ministry of Shipping has formulated a Perspective Plan for development of the Maritime Sector, namely, “The Maritime Agenda (2010-2020).” This Plan has estimated the traffic projections and capacity additions at the ports upto the year 2020. Based on the estimated growth, it has projected capacity of 3,130 MT by 2019-20. Since inception, Mundra Port & SEZ has posted 35 % CAGR and handled around 40 MT cargos in FY10, higher than most other major Indian ports. Also, it has hedged cargo uncertainty risk by getting into long‐term service contracts. The port is expected to continue its current growth momentum over the coming 2 to 3 years, handling around 96 MT of cargo by FY17E. Mundra is one of its kind ports. MPSEZ, under the aegis of the parent company Adani Enterprises, has been instrumental in developing a deep draft gateway port and SEZ strategically on the West coast of India with state–of‐the‐art infrastructure and capability to handle diversified cargo. Such a third generation port acting as one‐stop‐shop for export-import logistics is in unique league of ports and one of its kinds in India. The company has a strong portfolio of ports projects on the Indian west coast other than the flagship Mundra port. The projects are a mix of brown‐field port development i.e. currently at Dahej & Hazira and as terminal operator at the major ports i.e. coal terminal under development at the Murmagao port. Such projects would help the company gain a pan India presence. While the company is looking at setting up a large port on the east cost of India, it has also been scouting for opportunities to go global and has recently evinced interest in port development projects in Australia and Indonesia, in line with its long‐term strategy. ADSEZ has received the letter of award (LOA) from the government of Kerala for development of the Vizhinjam International Deepwater Project. The estimated project cost stands at Rs. 40.89 bn which includes the grant of Rs. 16.35 bn. The project will to get commission in the next four years. The Kerala state will spend additional Rs. 14.63 bn towards break water construction and Rs. 5.3 bn towards land acquisition which is around 53 hectares. The company will receive 75 % of the grant during the period of construction and 25 % once the terminal gets commissioned. The concession period of the project is 40 years with the option of 20 years further extension. Revenue share of 1 % to the Authority are expected to commence from the 15th year of COD as per the Concession Agreement and will be increased by 1 % every year. Vizhinjam port will be competing with Tuticorin, Cochin, Chennai port. The port will also compete with international port Colombo for the transhipment traffic. The first leg of Vizhinjam will try to gain market share from Cochin port due to the availability of similar hinterland for the southern Kerala cargo which contributes around 40 % of the Kerala traffic. The port is being developed as a Transhipment Hub, to cater current largest mother vessel with Design Vessel: 18000 TEU and Birth Length: 2000 Mts. The proposed site has minimal Littoral drift and as such would hardly require any maintenance dredging during the years of operation. This will result in low O&M Costs. The port has natural draught of 18.4 Mts. The key success factors of the APSEZ is the strong availability of Draft Depth and Waterfrontof Mundra and other ports handled by APSEZ, it is closest port to Northern hinterland, the cargo generation is from its parent firm, they have long term cargo contracts. This makes the APSEZ a good pick in the port sector.
Outlook and Valuation: 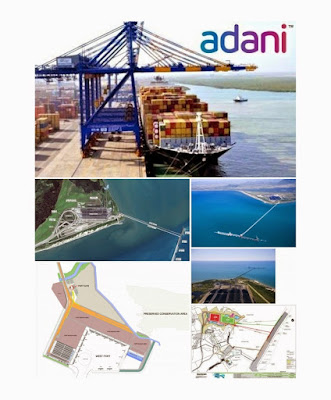 *Reader Friends, grab a fresh hot cup of coffee, turn on your net & browse on to www.bhavikkshah.blogspot.in & take out few minutes to get to know the most interesting world of investment... Till then HAPPY INVESTING, don't forget to Share !!